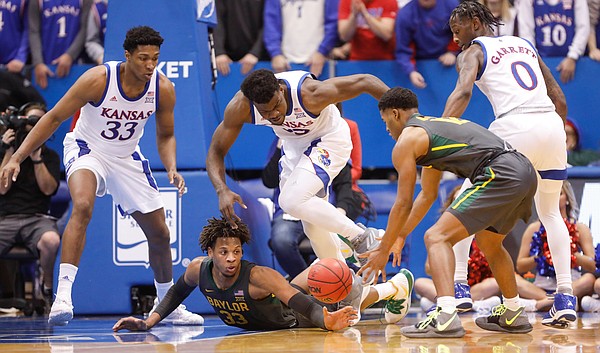 Baylor Bears forward Freddie Gillespie (33) flips a loose ball to Baylor Bears guard Jared Butler (12) away from the Kansas defenders during the first half on Saturday, Jan. 11, 2020 at Allen Fieldhouse. by Nick Krug

Quick grades for five aspects of the Kansas basketball team’s 67-55 home loss to Baylor on Saturday at Allen Fieldhouse.

• The two-big look didn’t do the Jayhawks much good in the opening minutes. And Baylor’s defensive scheme, heavy on fronting the post, kept KU’s bigs from making a scoring impact throughout the first half.

The Bears outscored KU, 14-6, in the paint in the first 20 minutes by taking away Udoka Azubuike (0-for-1 in 16 minutes) as an offensive option.

• There were some truly suspect attempts at entry passes to Azubuike, contributing to the Jayhawks' 6 turnovers in the game's first 8-plus minutes.

• The miscues weren’t as frequent or as damaging for KU in the second half, but BU’s defense still kept the Jayhawks off kilter.

Kansas finished the rare home loss — snapping a 28-game winning streak — shooting 39.2% from the floor and 4-for-15 from 3-point range.

Baylor connected on seven straight field goals to close the half, with Butler and Teague knocking down 3-pointers and the Bears scoring layups off KU turnovers.

• Baylor’s offense didn’t exactly take off in the second half, but as the showdown between top 5 teams wore on, KU had trouble stopping standout BU guard Jared Butler (22 points, 3 assists).

• With KU’s offense no-showing much of the second half, it seemed to affect the Jayhawks’ defensive effort and psyche the longer BU maintained its comfortable lead.

By the game’s final minutes Baylor had zapped KU of its defensive energy, setting up a late-game offensive surge with the game all but officially done.

• Azubuike put in work on the defensive end of the court throughout the first half, despite KU’s inability to get him the ball inside on offense.

The 7-footer finally got an easy look at a post-up with more than 14 minutes left in the game, scoring his first basket 22nd minute on the floor, finishing with his left hand.

The senior center finished with 6 points, 11 rebounds and 7 blocks.

• David McCormack, as the starting big beside Azubuike, proved to be the odd man out, playing only 6 minutes in the first half, with the Bears outscoring KU by 10 when he was on the floor. He finished the outing scoreless, with 1 rebound.

• KU’s three starting guards didn’t do the Jayhawks any favors in the first half, between their inability to get Azubuike involved and their limited good looks in the half court.

• Devon Dotson suffered some sort of hip injury late in the first half, and he only played a few seconds in the second before heading to the bench in pain.

He missed basically the first 11 minutes of the second half before checking back in with 8:52 to play, and KU down 48-38.

Clearly not himself, Dotson produced 9 points and 3 assists in 28 minutes.

• Marcus Garrett began attacking the paint with more regularity in the second half, with Dotson out, and KU in need of some drives out of its guards.

But Garrett was the only KU starter to reach double digits in scoring, with11 points, 4 rebounds, 4 assists and 4 turnovers in 35 minutes, while playing through some pain on a bad ankle.

• Ochai Agbaji (6 points, 5 rebounds) wasn’t the 3-point sniper he looked like earlier in the week at Iowa State. In fact, Agbaji didn’t even attempt a 3 until the 7:58 mark of the second half, misfiring from the left wing.

• Isaiah Moss provided just the offensive spark KU needed after a rough start to its Saturday afternoon. The grad transfer from Iowa drained 2 of his first 3 looks from downtown, scoring 8 of KU’s first 15 points. The Jayhawks trailed, 9-3, before he came in and KU went away from its two-big lineup. And he put up 10 points before he had played 10 minutes in the first half.

Moss’ defense isn’t his strong suit, though, and that showed up more than once in his 14 first-half minutes, costing KU in the half court and in transition.

Moss finished with 15 points and 3 rebounds.

• On the rise the past several weeks, freshman Christian Braun (4 points, 2 boards) first stood out in the second half, when he came crashing in for an offensive board and drew a foul, with KU finally starting to put together a rally.

• Silvio De Sousa got some first-half minutes and contributed with some solid defense and activity, as well as a couple of offensive boards.

• KU would need some help from reserve Tristan Enaruna, too, who subbed in for Dotson when the point guard checked out early in the second half, pushing Garrett over to point guard.

Enaruna didn’t even play in the first half. But just a few minutes into the second, he gave KU a spark with his defense, smothering a shot inside.

Benton, you should add a coaching category to your report card.

I'd give D's in every category, including coaching. As bad as last year's team was, they never lost at home!