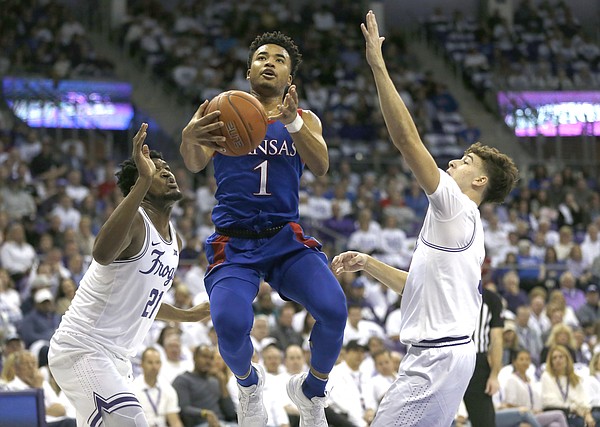 Kansas guard Devon Dotson (1) handles the ball inside a TCU center Kevin Samuel (21) and guard Francisco Farabello (3) defend during the first half of an NCAA college basketball game, Saturday, Feb. 8, 2020, in Fort Worth, Texas. (AP Photo/Ron Jenkins) by Associated Press

Fort Worth, Texas — Quick grades for five aspects of the Kansas basketball team’s 60-46 win over TCU on Saturday.

• An ugly couple of opening minutes for the Jayhawks had the makings of a performance that would cost them a game in the standings if something didn’t change in a hurry.

• The solution proved to be getting the ball inside, with heavy doses of Udoka Azubuike, mixed in with some layups and dunks for KU’s guards when they could find them.

KU outscored TCU, 22-10, in the paint in the opening half, while only shooting 36.1% from the floor overall.

• KU wasn’t putting an emphasis on 3-pointers in the first half, but the few looks they sought out weren’t dropping early. Finally, marksman Isaiah Moss buried their fifth attempt from deep, and in a game with so little scoring, KU led by 11 before halftime. The Jayhawks shot 2-for-7 from deep in the first half, with Moss providing both makes.

• The Jayhawks’ offense struggled through much of the second half, unless they were able to get Azubuike the ball in the paint or score in transition.

• KU got another road win while hitting 41% from the floor, going 4-for-13 on 3-pointers and scoring 36 points in the paint. The Jayhawks turned it over 10 times.

• The first half was not exactly pretty to watch, but KU made sure that the TCU offense looked even uglier. The Frogs shot just 8-for-27 in the opening half, with 8 turnovers.

TCU headed to the locker room with only 18 points on the scoreboard, after its shooters went 2-for-11 on 3-pointers.

• The Frogs, of course, found relatively more success in the final 20 minutes, but finished the game 35% from the field, 5-for-22 on 3-pointers, with 26 points in the paint and 17 turnovers.

• Azubuike got off to such a rough start that Bill Self opted quickly to take him off the floor and sit him on the bench, a little more than 3 minutes in.

After a brief seat that didn’t even last a full minute of game clock, Azubuike returned to the court and immediately began destroying TCU inside.

Azubuike had 12 points and 7 boards by the time he took a rest at the midway point of the first half. He added another basket and 2 rebounds before the break.

• The senior 7-footer wasn’t at his personal best, but was by far and away the best player in a KU uniform, contributing his 10th double-double, with 20 points and 15 rebounds, plus 5 blocked shots.

• Devon Dotson got off to a 1-for-6 shooting start, but was getting decent looks while remaining assertive. His spin move into a lay-in that gave KU a 21-13 lead at the time seemed in the moment it might be a turning point for him versus the Frogs.

Even though that wasn’t the case in the first half, as Dotson shot 2-for-9 and missed both is 3-point attempts.

Although Dotson gave KU some rare points here and there in a low-scoring second half, he turned the ball over 3 times in the first portion before getting his game back on track.

• The Jayhawks weren’t getting much production out of anyone except Azubuike and Dotson in the first half, as Marcus Garrett and Christian Braun went scoreless and Ochai Agbaji had 2 points at intermission.

That trend carried over into the second half, as Dotson and Azubuike were the only Jayhawks scoring until McCormack hit a long jumper with 7:58 to go.

Garrett, Braun and Agbaji combined to shoot 2-for-23 at TCU, and between the three of them had 7 points, all from Agbaji.

• McCormack and Moss were in the game early at TCU, a result of the Jayhawks’ ugly start and Self’s unhappiness with the play of Azubuike and Braun.

Moss would be the only sub KU leaned on heavily in the first half, though. The senior shooter went 2-for-4 from deep in the first half, burying one in the corner in front of TCU’s bench in the final seconds to give KU a 31-18 halftime lead.

The grad transfer played well enough to start the second half, in place of Braun. Moss’ 3-pointers looked off the mark, though, and he finished with 9 points on 3-for-8 3-point shooting.

• McCormack, in limited minutes produced 6 points and 4 rebounds while filling in for Azubuike.