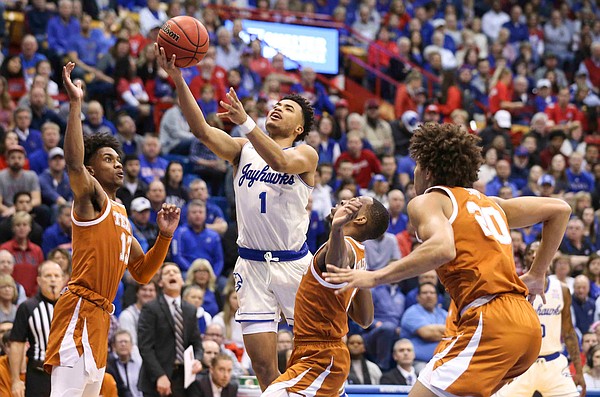 Kansas guard Devon Dotson (1) gets to the bucket against several Texas defenders during the first half on Monday, Feb. 3, 2020 at Allen Fieldhouse. by Nick Krug

Quick grades for five aspects of the Kansas basketball team’s 69-58 win over Texas on Big Monday at Allen Fieldhouse.

• Coming up with points felt like a genuine struggle for KU much of the night in an ugly college basketball game.

• The Jayhawks’ lack of success from 3-point range made it all the more painful to watch. KU went 2-for-12 from deep.

• When they could get the ball inside with some room to operate against the long and swift UT defense, the Jayhawks scored 40 points in the paint.

• This Texas team isn’t known for its offensive prowess, but the Jayhawks made sure not to give the Longhorns many opportunities to play out of character.

• UT only scored 4 second-chance points and 22 points in the paint.

• Bill Self decided to take away Udoka Azubuike’s starting job after some type of incident the coach opted to keep in house. And Self gave the starting center job to David McCormack. But by the end of the night it was Azubuike playing a starter’s minutes.

As usual with McCormack, there were some good energy minutes and some less productive moments.

• KU’s guards combined for 6 assists in the win.

• Marcus Garrett easily led the team in assists, with 4, and provided 11 points, 5 rebounds and 4 steals while playing 39 minutes on a foot injury that continues to have him playing through pain.

• Devon Dotson deserves as much credit as anyone for KU eventually winning comfortably, as he scored 14 of his 16 points in the second half.

• Ochai Agbaji gave KU 8 points on 3-for-8 shooting, plus 6 rebounds in his 36 minutes of action.

• Christian Braun was assertive even if he wasn’t a focal point of the offense, and the freshman scored 4 points to go with his 5 rebounds and sound defense.

• Azubuike scored 10 of his 17 points in the second half, and grabbed 8 of his 12 boards in those 13 minutes after halftime.

That was when Azubuike finally looked like himself again, going 5-for-5 from the floor.

The 7-footer finished with a pair of blocks and looked far more engaged than he had two days prior in an off outing against Texas Tech.

• Lineups with Isaiah Moss didn’t give KU as much as Self hoped, as the senior went 1-for-5 from 3-point range in his 23 minutes. But Moss at least showed a willingness to attack the paint on a few occasions and scored 7 points.

Yep, agreed. This time our defensive effort on 2nd helped us win. Dok helped us moving the score higher in the 2nd, too. That's also when Dotson finally was able to score some. That bounce pass from Ochai to Moss was a beauty. Come to think of it, our offense wasn't that bad. Ochai was able to hit a couple of jumpers, too. It's just missing 3s has been worrisome. If only those kids could convert those 3pt attempts (at least 30%), we would've had more than 10 assists per game - guaranteed.