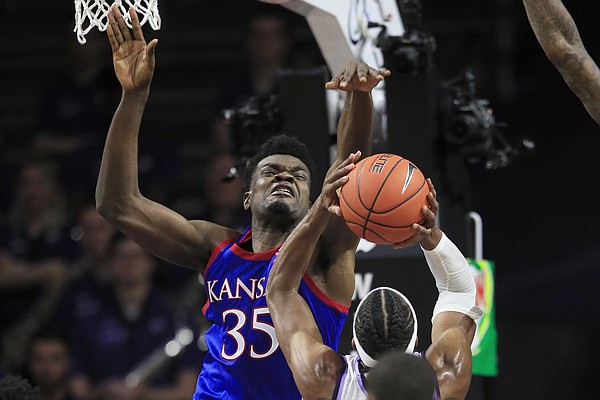 Manhattan — Quick grades for five aspects of the Kansas basketball team’s 62-58 win over Kansas State on Saturday at Bramlage Coliseum.

• The Wildcats, despite their struggles this season, are known for their defense — specifically their ability to disrupt possessions and create turnovers. The Jayhawks got an early reminder of that Saturday afternoon, with 3 turnovers less than 3 minutes in.

Although KU wouldn’t continue coughing up the ball at that rate, every time the Jayhawks did it gave K-State’s struggling offense some life. The Wildcats scored 12 points off KU’s 11 first-half turnovers.

• When the Jayhawks took care of the ball, they were scoring in the first half. They shot 56% from the floor and 3-for-5 on 3-pointers. Plus, the visitors went 14-for-18 at the foul line in a physical game.

• KU only scored 10 points in the paint — where the No. 1 team in the nation usually thrives — in the first half. That trend wouldn’t hold up so severely for the second half, as the Jayhawks had 8 points inside less than 7 minutes in. They finished with 26 points overall in the paint to K-State’s 18.

• The Jayhawks’ offense struggled more than usual after halftime. With 11:24 left, KU was just 4-for-14 from the field and 0-for-6 on 3-pointers. Their lack of 3-point shooting kept K-State in the game. KU went 1-for-10 from deep in the final 20 minutes.

• KU shot 33% from the floor in the second half, while turning it over 5 times.

• With K-State’s offensive struggles this season, maybe we should’ve anticipated a rough offensive start versus Kansas.

KU smothered the Wildcats in the opening minutes, after Cartier Diarra opened the day with a successful 3-pointer. It would be 7-plus minutes before K-State hit another shot from the floor. The Wildcats missed 9 shot attempts in a row and turned the ball over twice while falling behind, 14-5.

• In a low-scoring first half, though, KU’s defensive mistakes most often resulted in the Wildcats finding some open looks at 3-pointers. Those shots kept the crowd and the Wildcats from giving up on the idea of an upset.

The Wildcats kept it interesting in the first half with the help of 6-for-12 success from 3-point range.

• K-State, which spent much of the second half leading, went 2-for-13 on 3-pointers after halftime and shot 35% overall during the deciding half.

• KU’s massive center, Udoka Azubuike had scored 4 of his team’s 5 points when he rolled his right ankle inside, while coming down on his attempt to up-and-under his way to a bucket.

That came 4:15 into the Sunflower Showdown, and Azubuike walked slowly back to the bench under his own power, after taking some time to get up from the floor, as trainers came out to check him out.

After going back to the locker room, Azubuike returned to the floor with 9:01 left in the first half and KU up, 19-12.

Azubuike often wasn’t as engaged and active as usual while dealing with the pain in his ankle. That led to Azubuike not defending up to his standards at times.

The senior 7-footer finished with 6 points and 9 rebounds in 20 minutes.

• Devon Dotson’s speed proved even too much for K-State’s perimeter defenders to manage much of the time, with his attacks leading to layups and drawn fouls.

Dotson carried KU’s scoring throughout the first half as a result, scoring 15 as the Jayhawks took a slim 34-34 lead into halftime.

The surefire All-Big 12 first-teamer kept right on attacking when openings appeared in the second half, making his bursts to the rim look effortless.

Dotson put up 25 points and 1 assist.

• Ochai Agbaji got off to a rough start in the road rivalry game, responsible for a turnover on each of KU’s first two possessions. The miscues resulted in a rare early trip to the bench for the sophomore.

Agbaji returned to the lineup a few minutes later. After settling back in, he delivered KU’s first 3-pointer of the game off a drive and dish to the left corner from Dotson.

HIs crash of the offensive glass and put-back early in the second half, with KU trailing, helped the Jayhawks from lingering even longer in a rut.

• Marcus Garrett turned the ball over 3 times and didn’t attempt an official shot from the floor in the first half, but his presence remained a must for KU, between his defense and his ability to complement Dotson as a ball-handler.

HIs first basket of the day, though, came in the final 2 minutes, and was a tough one inside in a two-possession game.

Garrett had 3 points, 3 assists and 4 rebounds.

• Isaiah Moss found it hard to get shot attempts against K-State. The senior guard, who is KU’s best 3-point shooter, had an 0-for-0 first half at Bramlage Coliseum, in 18 minute of action. To his credit, he still contributed offensively, going 4-for-4 at the foul line.

He finally took advantage of an opening immediately in the second half, but misfired on a 3-pointer from the right wing. He finally got himself a bucket by attacking in transition and finishing strong with KU still trailing 6-plus minutes into the second half.

Moss contributed 8 points and went 0-for-4 from 3-point land.

McCormack played 10 minutes in the first half, and some defensive lapses hurt KU from time to time. He scored 5 of his 9 points before halftime and grabbed 3 of his 4 boards in that span.

• Christian Braun didn’t play enough to be a huge factor in the first half, but drained his lone 3-point attempt.

Braun, who scored 6 points, also put an end to KU’s cold streak from deep in the second half, burying an open look from the left wing that made KU’s lead 53-48 with 4:52 left.