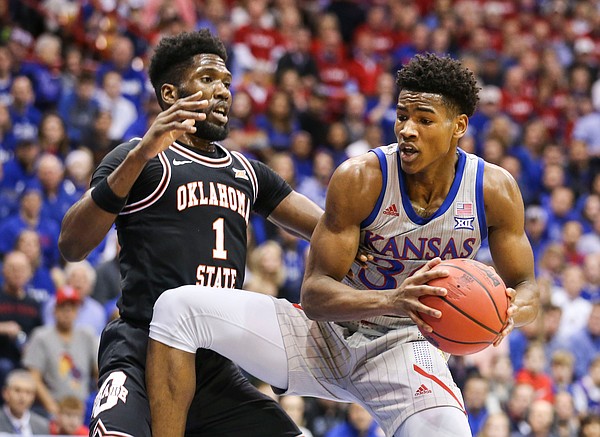 Kansas guard Ochai Agbaji (30) moves in to the bucket against Oklahoma State guard Jonathan Laurent (1) during the first half on Monday, Feb. 24, 2020 at Allen Fieldhouse. by Nick Krug

A supporting starter for the No. 1-ranked team in the country, Ochai Agbaji often blends in more than he stands out.

That doesn’t mean his head coach, Bill Self, wants Agbaji playing passively on offense. With the attention Kansas opponents must give to the Jayhawks’ inside-outside duo of Udoka Azubuike and Devon Dotson, opportunities for Agbaji often materialize. And when they do, KU needs the agreeable Agbaji taking advantage.

The 6-foot-5 sophomore guard’s defense, athleticism and energy keep Agbaji on the court for Kansas (25-3 overall, 14-1 Big 12). That’s why he played 39 minutes in the Jayhawks’ vital win at Baylor, despite going scoreless for the first time this season and just the third time in his 44-game college career.

“I was definitely happy for my teammates, happy for the outcome of the game,” Agbaji said of his zero points in a crucial victory. “Our main goal was just go down there and win, no matter what. Any way we can do it. So, I mean, if it takes me not even scoring and us getting the ‘W,’ then I'll have that every single day.”

Even so, with just a handful of games left in the regular season, Monday night’s matchup with Oklahoma State was no time for Agbaji to fade into the background, on the heels of an 0-for-5 outing at Baylor.

So Self was pleased to see Agbaji produce 15 points, while going 5-for-9 from the field and 2-for-6 on 3-pointers versus the Cowboys.

“A lot better,” Self said of Agbaji’s offensive approach in an 83-58 KU win. “Aggressive. Shot a couple balls right off the bat.”

It all began for Agbaji with an assist from the Jayhawks’ dominating big man, Azubuike. Dotson had just thrown KU’s senior center an entry pass into the paint, and as Azubuike gathered inside, OSU took for an ultra-aggressive approach, sending four defenders at the 7-footer. Azubuike reacted by spotting Agbaji in the nearby left corner, and the sophomore side-stepped into a successful 3-pointer for KU’s first basket of the night.

That quick start had Agbaji confident enough to catch and fire quickly off a defensive stop on KU’s next possession. And although that 3 misfired, it didn’t put an end to his self-assured offensive mindset — which is exactly the attitude his head coach wants Agbaji to have.

He showed briefly he can do that as a playmaker, as well. At an early juncture of the first half, Agbaji dribbled hard toward the paint from the left wing, forcing the OSU defense to react. His decisive attack off the bounce created the opening Isaiah Moss needed to drain a wide-open 3-pointer and gave Agbaji an assist.

His most eye-popping moment, though, came above the rim. With a David McCormack block on defense serving as the catalyst for a fast break, Agbaji sprinted down the left side of the floor. His instincts and hustle led him to the rim, as Dotson served up a lob that Agbaji slammed.

Late in the first half, Agbaji again looked authoritative with the ball in his hands, driving right at OSU’s Lindy Waters III on a poor closeout, drawing a foul that led to two made free throws.

Even though Agbaji missed two well contested 3-pointers in the final seconds of the first half, with the clock influencing his decision to take those shots when he wouldn’t have to force them in most situations, he came right back out in the second half ready to help put OSU away.

A few minutes removed from the halftime break, Agbaji found a larger defender, Cameron McGriff, checking him on the perimeter. So Agbaji went into attack mode, crossing over the 6-foot-7 forward and finishing over McGriff with a runner off the glass while drawing a foul for a 3-point play.

Just more than a minute later, Agbaji caught a pass on the right wing with eight seconds left on the shot clock. Azubuike came up to set a screen for him and Agbaji used that opportunity to dribble into a 3-pointer that put KU up by 13 points.

Agbaji’s final points of his fifth double-digit scoring game in Big 12 play this season, once again, were the result of his firm response to a defensive opening.

When OSU opted to trap Marcus Garrett near mid-court, it left three defenders to cover four Jayhawks and a lot of space for Agbaji to operate once Garrett threw him a pass out on the right side. Agbaji wasted no time in determining a plan of action and dribbled into a rhythm jumper, which he buried from just behind the right elbow.

Self appreciated that Agbaji repeatedly sought out shots for himself.

“I don’t know football very well, but it seems like they’re playing nine in the box or whatever they call it,” Self said of defenses the Jayhawks have faced. “And it seems like to me you’ve got to throw long every now and then, even if it’s incomplete just to stretch the defense. That’s what we’ve got to do. We’ve got to shoot the ball to stretch the defense. When we do that, it opens up a lot more driving area and lanes.”

KU’s best and most used lineup versus OSU had Agbaji out on the court with Dotson, Azubuike, Garrett and Moss — KU’s starting five for the past four games. That unit played 15:09 versus OSU and outscored the Cowboys, 34-18.

What makes Agbaji (averaging 10.1 points a game this season, on 43% shooting and 34.1% 3-point accuracy) such a good fit as a third or fourth scoring option is KU doesn’t have to run actions for him for Agbaji to produce. Just as he showed versus OSU, reading and reacting can help him accumulate points effectively. Having an assertive approach in those moments brings out the best in Agbaji.

The Jayhawks don’t always need points from Agbaji, but his teammates and coaches do want him bringing an opportunistic attitude on offense.

“Defensively, he's been pretty solid and good, basically all year long,” Self said. “But tonight he was different. He was different offensively. Much more confident.”

O.A. (The "Mini Greek Freak") tends to hesitate for a split second after he catches the ball. My best guess is that he is "thinking" a little too much. Perhaps, Coach could design a few more alley oops for O.A. to "flush his mind". Rock Chalk!

He's young, really young as far as number of years he has played basketball. Another year and Abaji will be a stud. As far as lobs designed for him, the play is being run but we're not throwing the lob. Watch the out of bounds play against Okie Lite. #30 streaks down the middle unguarded but we throw the typical inbounds to Dok. I'm sure that is frustrating to Coach.

Actually, other than scoring 15 in the last game, he has had some pretty forgettable games of late with many wide open missed shots, shots out of the offensive rhythm, poor free throw shooing, poor court management with shot selection, inbound passes and defensive switching laps. To his credit, he has hit the boards with some consistency, hustled relentlessly and shot the pull up jumper well.

Number one need; consistency on both ends of the floor, game in, game out.

Glad to see this. Braun and Moss have picked up their confidence and aggressiveness lately, and we need Ochai to do the same. Every player on the court needs to be dangerous for us during the tourney.

that was a great game for him. everyone says we need him and or Braun to be more consistent in the scoring area to help out Devon and Dok. With that third person (one of those two) always scoring 12-15 per game, we are probably the best team out there. Marcus gets a pass based on his outstanding defense.

completely unrelated, but Danny & the wake forest miracles upset Duke last night in 2OT. Anytime a Jayhawk is involved in a win over Duke we sing praises. Great Job Danny!

Great win for Danny. I've been rooting for him but I think the only thing keeping him employed is his buyout. For Wake to get into the tournament this year would require a greater miracle than the one he performed in 1988.

Couldnt have said it better myself Chad