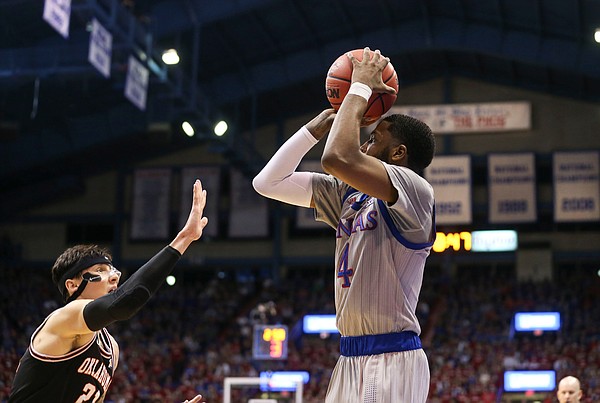 Kansas guard Isaiah Moss (4) pulls up from the corner over Oklahoma State guard Lindy Waters III (21) during the first half on Monday, Feb. 24, 2020 at Allen Fieldhouse. by Nick Krug

Quick grades for five aspects of the Kansas basketball team’s 83-58 win over Oklahoma State on Big Monday at Allen Fieldhouse.

• The Jayhawks weren’t always knocking down the 3-pointers the Cowboys invited them to take. But the offense didn’t ultimately suffer for KU as a result.

After a low-percentage first half of shooting (34.4% from the field), the Jayhawks finally got rolling a few minutes into the second half.

They connected on nine shots in a row to bury OSU, with four of their baskets in that stretch coming at the rim.

• KU finished 44% from the field in the easy home victory. The Jayhawks went 10-for-28 on 3-pointers and scored 28 points in the paint.

• The Cowboys spent much of the loss shooting in the low 30s, percentage wise.

Their 13 turnovers didn’t help, either, on a night OSU shot 38% from the floor. The Cowboys had to find and hit 3-pointers to stand a chance, but KU held them to 3-for-12.

• KU star senior center Udoka Azubuike looked ready for the attention OSU would give him from the opening moments of the rout.

Four OSU defenders zeroed in on the KU big man on an early touch and Azubuike wisely and quickly kicked the ball out to Ochai Agbaji for a wide-open 3-pointer, which the sophomore guard drained.

Azubuike wouldn’t be denied his chances to score, though, as he helped KU demolish OSU inside, all while he kept giving the Jayhawks high-level rim protection, too.

The Jayhawks’ 7-footer left the latest win with 19 points, 16 rebounds 3 blocked shots and a 7-for-8 night at the free throw line.

• Devon Dotson only shot 3-for-12 in the win. The sophomore point guard helped make up for that with his defense, as well as 4 assists and 5 boards on his 11-point night.

• Isaiah Moss quickly set his feet for his second shot attempt of the evening, a great look at the hoop from the top of the key, and the grad transfer knocked it down with the OSU defense collapsing on the interior any time KU got the ball inside. He looked like the perfect solution to OSU’s defensive strategy.

Moss finished 3-for-6 on 3-pointers. Not exactly a game-changer, but the exact kind of solid production KU need from him.

• Ochai Agbaji bounced back nicely from a scoreless game at Baylor, putting up 15 against OSU, to go with his typical defensive effort.

• Marcus Garrett was the best creator and distributor among KU’s guards, dishing 7 assists.

His defense, as always, made him a huge bonus for the Jayhawks’ lineups, too, on a night Garrett produced 5 points and 3 rebounds.

• David McCormack early on looked explosive on an offensive rebound and follow jam, hranessing his energy for good.

McCormack wasn’t done there, either, with the blowout allowing him to get plenty of quality minutes. The sophomore backup big came away with 10 points and 4 rebounds, plus 1 block.

• Christian Braun looked confident with the ball in his hands again, and was a shooter that gave OSU trouble, as he went 3-for-4 from deep.

Early in the season, Coach Self made a similar comment about Dok’s FTs. That he makes a high percentage in practice but needs to feel it in a game. He had a 4-4 game a few weeks ago. It could be devastating for others if he can hit them consistently.

We're ready to march, win it all. This is the year! Get ready to party! Rock Chalk!