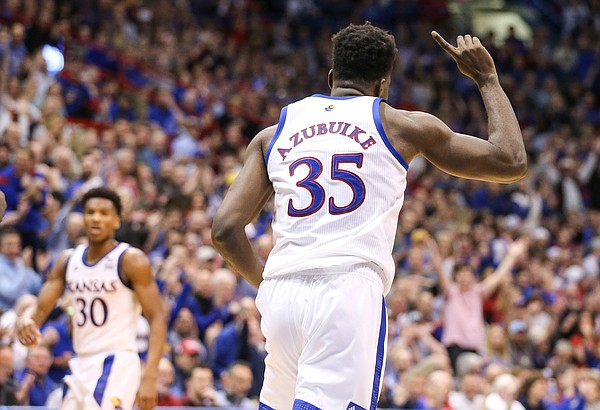 Kansas center Udoka Azubuike (35) wags his finger after getting a bucket against the Iowa State defense during the second half on Monday, Feb. 17, 2020 at Allen Fieldhouse. by Nick Krug

At least not in the inventive and adaptive mind of Kansas center Udoka Azubuike.

The Jayhawks’ 7-footer went back Monday night, early in the second half versus Iowa State, to what has become his go-to celebration this season, waving his right index finger toward no one in particular.

Unlike past instances, though, the gesture didn’t follow one of Azubuike’s rim-protecting obliterations of an opponent’s shot.

The big center who usually gets his touches in the post or a few feet from the basket, caught the ball on the blue feathers of Allen Fieldhouse’s mid-court Jayhawk, took three dribbles — using the slightest of crossovers — at ISU junior forward Solomon Young and then sold his defender on a hard shoulder and ball fake toward the left side of the paint just to spin back the other direction for a bucket.

As Azubuike ran back to play defense, he shook that finger after showing off his handles and footwork.

“I guess my defender wasn’t expecting me to do that,” Azubuike said of what inspired him to bring his wag to offense.

The not-so-subtle motion former NBA shot blocker and defensive stalwart Mutombo made famous could go on display at any time now when Azubuike is on the floor.

“Just when I feel like doing it, I just do it,” the laughing big man explained, after putting up 13 points, seven rebounds and two blocks in KU’s 91-71 win.

It wasn’t Mutombo, though, that came to mind for KU point guard Devon Dotson, when he broke down the ball-handling skills Azubuike showed off in taking his man to the hoop.

“He looked like a young Joel Embiid out there,” Dotson proclaimed. “He looked good doing that. Put him in a blender.”

“I don’t know,” Azubuike said of his display being reminiscent of Embiid, the former KU center who is now an All-Star for the Philadelphia 76ers. “I just got the ball and I decided to take my chances and dribble the ball and it got in.”

It’s seldom that Azubuike even has the ball in his hands outside of the 3-point arc, let alone gets a chance to show off his ball-handling ability. The largest man in the building wasn’t about to make anyone think he should become a guard.

Still, he enjoys those rare instances when he can prove there’s more to his game and potential than most realize.

“For a big, I think I can dribble the ball,” Azubuike said. “With my size, I have confidence in my dribbling. So as soon as I got the ball and I saw an open space, I decided to dribble it.”

That instinct might have turned disastrous earlier in his KU career. But not even Azubuike’s staunchest supporter and harshest critic, Bill Self, could complain about what he saw from the center when Azubuike opted to go off the bounce in the half court.

“I thought it was pretty good,” KU’s coach said of the move. “I thought Dok had his moments. He turned it over (six times). He was careless. But I thought that was pretty impressive, what he did, and certainly showed how athletic he is.” 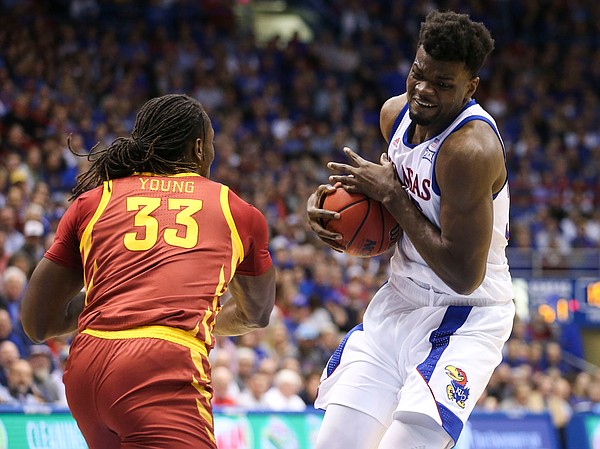 Kansas center Udoka Azubuike (35) makes a move to the bucket against Iowa State forward Solomon Young (33) during the second half on Monday, Feb. 17, 2020 at Allen Fieldhouse. by Nick Krug

KU’s other active big, David McCormack, said “you never know” what Azubuike might do on a given night. But McCormack wasn’t necessarily surprised to see the senior attacking off the dribble.

The backup center recalled how at the Maui Invitational earlier this season, he witnessed the man everyone calls “Dok” swat a shot and then turn that defensive stop into a personal fast break.

“I don’t put it past him,” McCormack said. “If he can go coast to coast, he can take it from the 3-point line and make a nice move.”

According to Azubuike, he’s working on all of the skills he’s known for, as well as those he isn’t “every time” he’s in the gym.

“For me, some of the stuff we do in college, I don’t really have the space to prove everything I can do,” KU’s confident center shared.

The Jayhawks don’t need him out on the perimeter, though, so most of the time he sticks to his personal offensive responsibilities: posting up, setting screens and rolling to the basket.