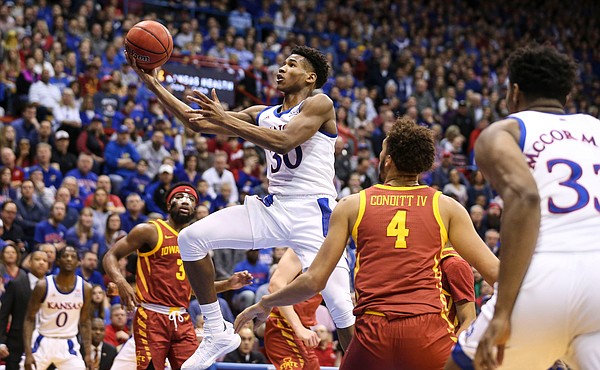 Kansas guard Ochai Agbaji (30) coasts to the bucket between the Iowa State defense during the first half on Monday, Feb. 17, 2020 at Allen Fieldhouse. by Nick Krug

Quick grades for five aspects of the Kansas basketball team’s 91-71 win over Iowa State on Big Monday at Allen Fieldhouse.

• KU’s two best offensive players made sure to torch their Iowa State defenders throughout the first half, setting the stage for a highlight factory.

What Udoka Azubuike and Devon Dotson spearheaded, their teammates made sure to imitate, and layups and dunks became the norm, as the Jayhawks spent most of the first 20 minutes shooting better than 60% from the floor.

• There really was no stopping the Jayhawks for ISU in the first half. The team that has struggled to connect from downtown most of this season was nowhere to be seen, and KU hit 7 of 14 3-pointers in the opening half of action.

• The only problem for KU in the first half was the defense couldn’t seem to stop Iowa State from long range.

The Cyclones started the night on fire and refused to cool off, draining 9 of their first 11 attempts.

• ISU executed against the normally stingy KU defense to the tune of 55.6% shooting in the first half, when the visitors put up 40 points.

• The Cyclones didn’t find nearly as many 3-point opportunities in the opening minutes of the second half, though, and KU extended its double-digit lead as a result.

ISU’s shooters combined to go 2-for-11 from 3-point range in the second half, as KU put the Cyclones away.

• Azubuike’s energy in the first half, as ISU’s defense failed to take his touches away, gave KU a noticeable boost.

The Jayhawks’ dominating center went for 10 points in the first half, going to the rim with power every chance he got.

The senior 7-footer finished with 13 points, 7 rebounds and 2 swats in the win.

• Dotson was one of three Jayhawks in double figures by halftime as his blazing speed and relentlessness helped set the tone for as entertaining a half of offense as the fieldhouse has seen this season.

KU’s sophomore point guard had 15 points, with the help of 3-for-4 3-point shooting by the break.

He kept on burning ISU defenders in the second half, and not just with his attacks off the dribble. Dotson exploded for 29 points and knocked down 6 of 8 from behind the arc.

• Marcus Garrett tamed down on offense after his absurd Saturday versus Oklahoma. But you knew he would bring it defensively, and he did.

Garrett had 8 rebounds and 3 steals with his 5 points and 6 assists.

• Isaiah Moss never found his way into an offense-friendly type of night for KU.

Early on, Moss tried to attack off the bounce a couple of times and got to the paint, but that’s not his strength. He had a rough miss and a turnover to show for his efforts.

Moss only scored 2 points and went 0-for-4 on 3-pointers.

• Ochai Agbaji sought out some layups and open looks for 3 in a productive night versus ISU’s outmatched defense.

The sophomore guard put up 14 points and dished 3 assists while often looking right at home in the uptempo game.

• Christian Braun came out flying and firing, fitting in ideally in the first half.

The freshman turned a steal into a fast-break dunk as KU got rolling in the first half, and went 3-for-4 on 3-pointers, en route to 13 points.