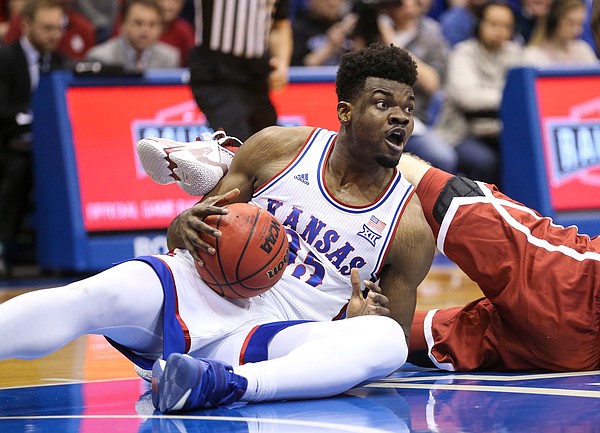 Kansas center Udoka Azubuike (35) comes away with a ball on the floor during the first half on Saturday, Feb. 15, 2020 at Allen Fieldhouse. by Nick Krug

Quick grades for five aspects of the Kansas basketball team’s 87-70 win over Oklahoma on Saturday at Allen Fieldhouse.

• KU opened up the game by knocking down some 3-pointers for a change — a promising sign for a team that hadn’t connected on more than four in any of its previous four games.

Marcus Garrett, after turning down an open look early in the shot clock on one possession, didn’t mind taking a 3 in a better situation soon after, knocking down his first 3-pointer since the last KU-OU game. Ochai Agbaji was next to hit one from deep.

• Despite those early 3-pointers, high-percentage looks closer to the hoop didn’t exactly follow in the first half for Kansas. The Jayhawks were hovering around 30% shooting most of the opening 20 minutes, with shots inside the paint a bit of a rarity, unless they were coming in transition.

And they missed 7 layups before halftime, taking a 38% overall shooting percentage into the break.

• KU’s offense made a turn for the better in the second half, as the Jayhawks converted 59% of their shots.

• In the first matchup with Oklahoma a month earlier, the Sooners went 8-for-29 from deep but missed a lot of quality looks at the basket. The Jayhawks knew they would have to better defend the arc in the rematch.

KU mostly took care of business in the first half, as OU shot 4-for-10 from deep, with Kristian Doolittle knocking down 2 of them.

In the second half, OU’s 3-point shooting didn’t turn into a massive problem for KU. The Sooners finished their road loss 8-for-24 from long range.

• A few defensive lapses in the first half led to OU layups and a dunk, and the Sooners were outscoring KU inside much of the half. By intermission, OU led 16-14 in points in the paint.

• The team defense KU played in the second half — give the players who shared the floor with Garrett and Udoka Azubuike, too — led to the Sooners shooting 36% from the field in the loss.

• Udoka Azubuike brought an active approach to the early tip-off, even as OU’s defense surrounded him on touches and made it more difficult for him to get his typical great looks in the paint.

That really showed up on the offensive glass, where Azubuike had 5 boards in the first half alone.

The 7-footer secured 10 rebounds by halftime.

• The Sooners effectively limited Azubuike as a scorer in the paint much of the first half, making sure he didn’t catch the ball deep inside, and if he did they had two or three defenders in great position with arms held high to force him into a difficult jump-hook or pass out of the paint. He was 2-for-6 in his first 11 minutes of action, and OU was able to keep up with the Jayhawks as a result.

• In the game’s final 20 minutes, Azubuike couldn’t be so easily bottled up. The senior center opened the half scoring over Brady Manek in the paint. The first time he saw a double, he dished to Ochai Agbaji for a layup. And even when he turned into a double team, making the wrong read, he still gathered an offensive rebound of his own miss for a put-back, as KU padded its lead in the opening minutes of the second half, going up, 50-34.

• Garrett continued his defensive dominance against the Sooners, even while burying 3-pointers.

The mastermind defender stole the ball from OU 4 times in the first half and, per usual, didn’t suffer anything close to a defensive letdown as the Jayhawks took a 41-32 lead into halftime.

There’s always variety in Garrett’s stat lines, but this one was particularly impressive: 24 points, 6-for-9 on 3-pointers, 7 assists, 4 steals and 5 rebounds.

• Devon Dotson proved to be as assertive as anyone in a KU uniform, getting to the rim for layups both in the open floor and during half-court trips.

Dotson distributed, as well, making for a productive day for the sophomore point guard, who tallied 19 points and 5 assists, plus 8 rebounds.

• Back in the starting lineup, Moss gave KU that 3-point threat to space the floor offensively, even when he wasn’t taking shots.

But he looked confident and ready to shoot when given the opportunity, too. Moss scored 8 points, while going 2-for-3 on 3-pointers.

• Agbaji, who had a couple of fouls barely 6 minutes into the game, got off to a slower start.

His second half activity helped KU bury OU, though, and Agbaji produced 10 points, 6 boards and 3 assists.

• Christian Braun became the sixth man for this game, with Moss playing more minutes for the Jayhawks lately.

After failing even attempt a 3-pointer in KU’s road wins at TCU and West Virginia, Braun wasn’t so hesitant versus OU. He had been on the floor all of 2 minutes when he buried a 3 from the left wing.

But Braun didn’t try to force himself into a larger role as a result. The freshman guard mostly defended and fit in, giving KU 3 points.

• David McCormack had some moments for KU when it was his turn to man the paint. The best of those was an impressive post-up and finish inside, proving that he can do Azubuike-type things for the offense when the senior sits.

McCormack finished with 6 points and 3 rebounds.