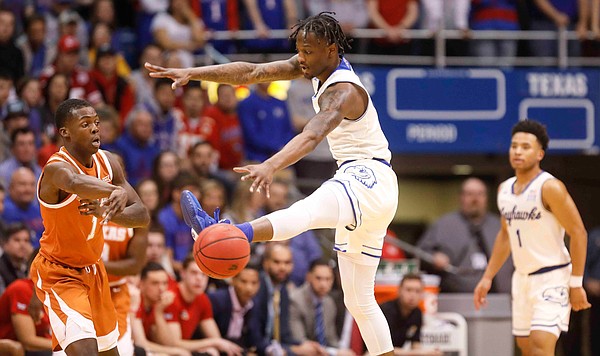 Kansas guard Marcus Garrett (0) defends against a pass from Texas guard Andrew Jones (1) during the first half on Monday, Feb. 3, 2020 at Allen Fieldhouse. by Nick Krug

Kansas guard Marcus Garrett is known neither as a shooter nor a scorer.

Still, when the Jayhawks’ indispensable veteran didn’t put a single point on the board in their win at TCU this past weekend, it was out of character.

Garret’s averaging 9.2 points per game during his junior season on 7.3 field goal attempts, converting 46.2% of his tries. But against the Horned Frogs, the Dallas native only put up four shots in his close to 35 minutes on the court.

Of course, Garrett still contributed statistically, with three rebounds, four assists and three steals. Plus, he’s the type of player who won’t allow himself to step foot on the floor without playing the type of staunch defense that makes opponents pray he’ll be guarding one of their teammates.

And that’s why Garrett remained one of the most important players on the court, even while going scoreless for the first time since KU lost to Villanova at the 2018 Final Four, when he was a freshman.

Bill Self called Garrett’s performance in a 60-46 road victory as average a game as the starting guard has had in a while, offensively.

“But he was still terrific defensively,” Self emphasized. “I mean, you can say what you want to and you can look at numbers, but numbers never tell the story. And after watching the tape he was still pretty good, even though I didn't think it was his best at the offensive end.”

Garrett’s real impact was more discernible in his plus/minus numbers from KU’s most recent road win. The Jayhawks outscored TCU, 52-38, when Garrett was on the court, while they were an even 8-8 with the Frogs in the five-plus minutes Garrett spent on the bench. The junior guard’s plus-14 led the team, even as standouts Udoka Azubuike and Devon Dotson filled up other columns in the box score.

While Garrett’s ability to attack off the dribble and get to the rim has proven to be a real strength for the No. 3 Jayhawks (20-3 overall, 9-1 Big 12) this season, TCU’s guards, unlike most teams, did a nice job of taking those opportunities away from Garrett, who ended up going 0-for-4, all on shots taken from 15 feet and in.

But Garrett is the rarest of basketball players, who doesn’t actually care that much about his individual scoring totals. And in that way, Garrett reminds Self of a former KU great.

Self shared this story with his Jayhawks about Mario Chalmers, who is famous for his clutch 3-pointer in the 2008 national championship game, but also loved racking up steals and blending in.

“We’re beating somebody here in our league bad, eight minutes left in the game. And I run a play for Mario, and I said, ‘I want you to shoot it,’” Self recalled.

Which brought Self to his point: “I think Marcus has that same attitude, as well.”

Azubuike and Dotson are the Jayhawks who will most often be mentioned as candidates for Big 12 and national accolades this season, but Garrett is just as essential to KU’s success.

Freshman guard Christian Braun said Garrett always brings much more to the lineup than his scoring ability, and Braun saw the upperclassman impact KU’s win at TCU in a variety of other ways.

“You know, at the end of the game, he got a good steal, just kind of took the ball from the guy,” Braun began, referencing a takeaway by Garrett that allowed him to feed Dotson for a transition layup, the first play of what became a 12-0 run that all but wrapped up the win.

“That's what he does is affect the game on the other end. And you know you're going to get that from him every game. So you know he's always going to have steals and be in the right place,” Braun continued.

“He kind of takes their best player away almost every game, too. And even if, like I think (Desmond) Bane ended up with 20 (points), it's always a tough 20,” Braun said of Bane’s 8-for-19 day versus KU. “They don't always get their normal stats or it's not as efficient, and that's because of Marcus most of the time. So like I said, it doesn't really matter what he does on the offensive end, because you know what he's going to do on the defensive end.”

KU freshman Christian Braun on challenges of facing a team for the 2nd time by KUsports.com

Comparing Marcus to Mario is a bit of a stretch, since Mario was a much better 3 point shooter.

Sort of like comparing Perry Ellis to Harrison Barnes? Barnes scored 23 for the Kings last night, but my Bucks still won!

I could care less if Marcus is scoreless. He's a provider, he's a solid defender, best passer out there in the team. He rebounds, too. This kid is special. He'll find ways to contribute and win us each game. I just wish he's healthy enough to bounce and start dunking his way to the basket. His ball handling has improved a lot.