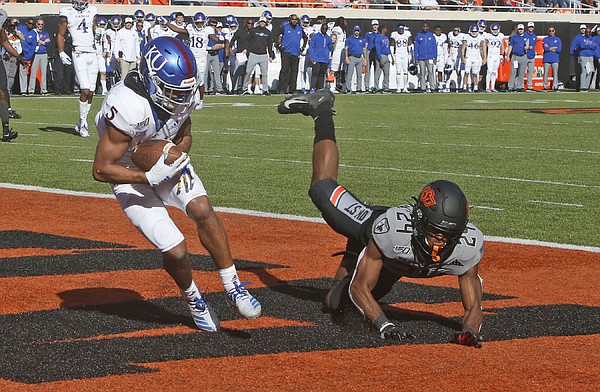 The NCAA is doing what plenty of people wish they could — pretending like 2020 never happened.

At least that’s the approach its Division I Board of Directors is taking with eligibility for its fall sports athletes. The board this past week officially gifted football players and other D-I fall athletes nationwide a blanket waiver to receive an additional year of eligibility, what with the COVID-19 pandemic upturning some schedules and canceling others.

One bizarre consequence of this move by the NCAA, though, is that a struggling program such as Kansas football could hypothetically have all of its seniors play 10 games this fall and then invite them back to do it again in 2021, because seniors will be allowed to return and not count against a team’s roster or scholarship limits.

It’s unlikely that it would play out to that extreme, because no athlete is guaranteed financial aid or a scholarship with that extra year of eligibility. As detailed in the AP’s report on the news, those decisions will be up to each athletic department.

Surely there will be some seniors Les Miles and his coaching staff will want to have back, and some that they will allow to move on.

Likewise, just because a player has the option of an additional season doesn’t mean he’ll want to take it. Think back to last year’s KU team. Quarterback Carter Stanley was very open at the end of his senior year that he wished he had more eligibility left so he could keep playing for Miles and offensive coordinator Brent Dearmon. But would someone like Hakeem Adeniji want to return for another year when he could go to the NFL and get paid for all the collisions and hard work offensive linemen endure?

What happens in the months ahead will no doubt shape how KU approaches these unique circumstances. But why not, if it’s possible, bring back a talented trio of receivers such as Andrew Parchment, Stephon Robinson Jr. and Kwamie Lassiter II?

There’s lots to sort out — and plenty of time for that — over the course of the next year with the ramifications of this decision from the NCAA, and it goes much farther than the players who are seniors this year. Perhaps the even crazier part of this is: freshmen who play this fall could still potentially have four more years of eligibility left when the 2021 season arrives.

So KU coaches this year don’t have to worry about how they manage freshmen who they were planning on redshirting. It’s just a freebie. Play them as much as you want. They’ll still be freshmen a year from now. (And the NCAA still will have to figure out how to handle the aftermath of these numbers and how they impact rosters for the next several years.)

The NCAA granted this blanket waiver to clean up any potential eligibility confusion ahead of time, in case entire seasons end up being cut short or canceled due to the pandemic. Remember: many D-I fall athletes, in non-football sports especially, still don’t know what their seasons will look like this year. Not every conference is forging ahead like the Big 12, ACC and SEC.

If COVID-19 doesn’t derail football plans this fall for the FBS leagues, KU would have the opportunity to bring back a number of experienced players for a bonus season.

Here’s a look at some KU football seniors who could potentially play an extra year in 2021:

This could sure help with the shortage of scholarship players KU is still digging itself out of.

It would really help with the small JR OL group (2) in particular. Gets us back towards a normal realm of 4-6 per year.

Wish there was more help for the DL.

You are failing to mention graduates can transfer to other schools and be immediately eligible.