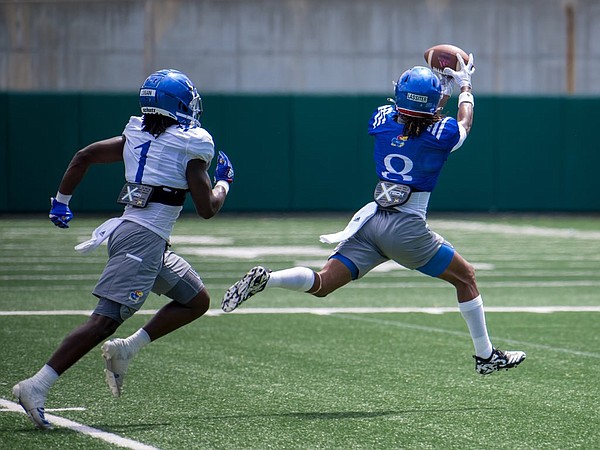 Kansas receiver Kwamie Lassiter II reaches to bring in a pass during a preseason practice in August of 2020.

Ask Les Miles about what he saw in his team’s first preseason scrimmage and the Kansas football coach will intentionally keep his answer vague and broad.

You know, just to be sure no one outside of the closed practice somehow discovers some nugget or piece of insight that would provide a glimpse at the Jayhawks’ plans, strengths or weaknesses.

“Offensively I think we moved the football well,” Miles said of the Wednesday session. “Pooka (Williams) ran the football well. The quarterbacks did the things that we asked them to do. I think offense won in the short term against the defense.”

Players are typically more revealing in their answers about scrimmage situations, even if they have been coached up to not divulge much, either.

Sure enough, the KU players who spoke with the media Thursday during the program’s first Q&A of the preseason actually came through with a behind-the-scenes look at the scrimmage.

Here’s what a few key players had to say.

Asked about the highlights from this week’s scrimmage day, MacVittie didn’t boast about any of his throws or start his answer by bringing up the passing game. Instead the QB shared how impressed he was with another part of the offense.

“We have depth at running back, no doubt,” MacVittie declared. “Our line held up great, and then we got the ball down field.”

MacVittie said his position coach and KU’s offensive coordinator, Brent Dearmon, teaches the quarterbacks there’s a rhyme and rhythm to everything they do offensively, and that’s why the QBs have to listen closely to every piece of advice Dearmon provides.

The man competing with MacVittie for KU’s starting job, Kendrick thought the offense showed some promising signs in the scrimmage, too.

“We were aggressive,” Kendrick said of what stood out to him. “There were some shots early that we took and they counted, and we scored from those shots and being aggressive. I think that’s going to be a big part of the offense, being aggressive but taking calculated risks.”

Kendrick also brought up some of Dearmon’s philosophy while discussing what worked in the scrimmage.

“When you get the opportunity, Coach Dearmon always preaches it, you want to hurt the defense,” Kendrick said. “That’s what we want to do.”

Robinson thought the first deep shot the offense completed was the biggest highlight of the scrimmage.

That particular play ended with senior receiver Andrew Parchment beating the secondary and hauling in a bomb.

“It got us going real quick at the start of the scrimmage, so that was a highlight for me, getting ready and going out there right away,” Robinson said of Parchment’s initial chunk yardage contribution.

As for what he did individually that might have been a highlight, Robinson took his answer in another direction.

“I’m really hard on myself with critiquing myself, so I always feel like I can do more. I feel like I did my job to my best ability, but I can always do something better,” Robinson explained of his thinking. “There was a play I caught a slant and I could’ve gone the distance, but I got tackled. I didn’t get a lot of YAC on that play, so I can improve on that.”

KU’s star offensive player in the backfield, Williams didn’t point to specific highlights or big plays that resonated with him in retrospect.

“We had a lot of standout plays and fundamental plays, too,” Williams said. “If we didn’t make them it would have been different.”

The only defensive player made available for interviews this week, Feaster said some of the plays that impressed him most came from Parchment in the passing game.

But Feaster spoke highly of another position group for KU’s offense, as well.

“I love our backs, personally, just because of how they run the ball,” Feaster said, adding when they have the ball there’s a physicality to their rushes. “To me that’s a highlight. When my backs run physical regardless of size, that shows heart.”

Feaster couldn’t leave out the defense, though. He said watching younger players in particular proved satisfying.

“Nick Channel had a great scrimmage, great highlights,” Feaster revealed of the sophomore safety from Wichita.

Asked to confirm his head coach’s assessment that the Jayhawks’ offense won the day, Feaster delivered a veteran response.

I see every Big XII opponent stacking the box and daring any Jayhawk QB to beat them via the passing game. I do like the Jayhawks receiving depth. AP and the receiving crew will really need to grab as many as they get thrown their way to help out the running game.

The 2020 season (if played for the entire 10 games) will be an interesting one to watch.

It should be an interesting chess game with RPO. So many lethal weapons with both Pooka and the WRs.