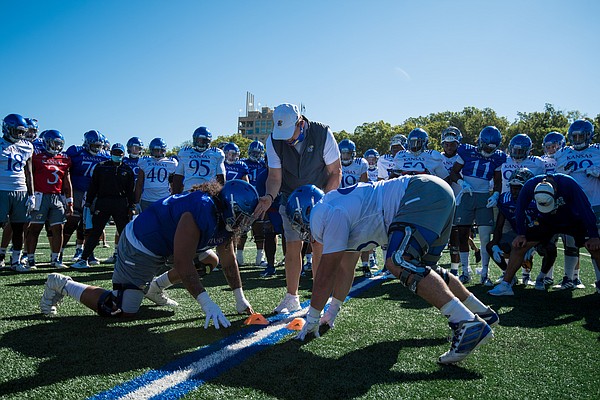 Members of the Kansas football team circle around two linemen about to compete in the Jayhawk drill on head coach Les Miles' cue.

Adapting common approaches to various aspects of life has become routine in the time of COVID-19.

No one likes the new normal, but most of us grin and bear it as best we can while following guidelines that hopefully make this all go away before long.

One very minor consequence of the pandemic in the grand scheme of life is the fact that Kansas football preseason practices are completely closed to the media.

In other Augusts — in the long, long ago, also known as those years that took place before 2020 — local journalists would get some peeks inside the Jayhawks’ closed practices. Nothing huge, just 15 to 30 minutes here and there, depending on the paranoia level of the head coach at the time.

Because those opportunities for insight haven’t been possible this summer, let’s use some of the images captured by the KU football program’s social media team as a jumping off point for some preseason camp thoughts.

It was totally appropriate the first images from camp that showed up back on July 31 included not only Les Miles, the man KU diehards hope can turn this program around, but the most talented skill player on the roster, Pooka Williams.

The offense could very well go only as far as Pooka can carry it. But this photo also reminded me that the junior back who is a known commodity also could have some huge help in his position group.

Just behind Williams in that Day 1 drill stood Velton Gardner — I also kind of love that he’s wearing No. 0 this year. There could be a nice stable of backs for offensive coordinator Brent Dearmon to feature with Williams. Gardner had some promising moments as a freshman in 2019. I’m also interested to see who emerges as the third back. Torry Locklin, Amauri Pesek-Hickson and Daniel Hishaw Jr. all could be candidates.

• Will a freshman receiver become a key target?

Seeing in person how big and fast new players are always is one of the most intriguing parts of viewing camp periods in person.

A guy I would have had my eyes on is freshman receiver Lawrence Arnold (No. 2). KU receivers coach Emmett Jones raved about the young wideouts he’s adding to his room via the 2020 recruiting class, and Arnold seems to have the body and athleticism to make it easier to crack the rotation early.

Arnold is 6-foot-3 and 185 pounds and could become an important target, especially when KU’s talented veteran receivers need a breather.

KU should have some real burners at its disposal in the passing game.

Dearmon and whomever wins the quarterback battle should enjoy finding different ways to get the ball to seniors Andrew Parchment, Stephon Robinson Jr. and Kwamie Lassiter II in space.

If the offense is clicking, watching those three run away from defensive backs will be commonplace.

Well naturally a receiver named Lawrence should thrive at KU ...

The kid from Florida that returns kick too. The WRs ability to stretch the field & QB ability to get the ball to them will be key to having an unstacked box for Pooka and Co.