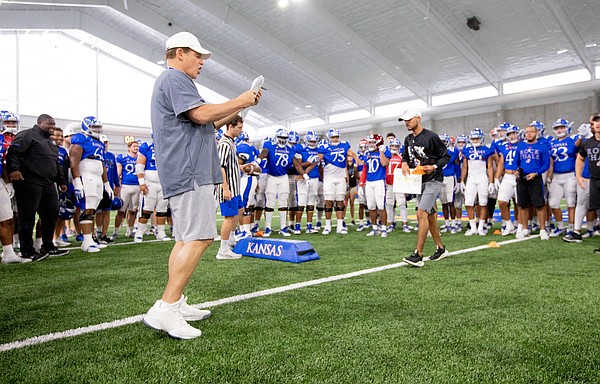 Kansas head coach Les Miles calls out players to go head-to-head in the Jayhawk drill during practice on Thursday, Aug. 8, 2019. by Nick Krug

There was no mention of quarterbacks, position battles or depth charts, but Kansas football coach Les Miles finally spoke publicly about the Jayhawks’ preseason camp on Monday night.

The Jayhawks, now with an official season-opening date and opponent, resumed practicing in pads and prepping for a season during a pandemic.

It felt like all of college football was sitting in a holding pattern just a week ago, Miles told KU’s in-house reporting outfit after Monday’s practice. Miles has yet to be made available for interviews with local media outlets this summer, though that is expected to change later this week.

“We know that the decisions ... are being made our on our behalf and for us,” Miles said, referring to the schedule changes and pauses as the Big 12 prepared to try for a 10-game season during the COVID-19 pandemic. “And I wouldn’t have it any other way. I promise you this: I would want to play football. And I like the idea that somebody with a doctoral degree (medical advisers to the conference) is making decisions for us in light of how much everybody in this field likes football.”

Miles said that these days, there are a lot of things to worry about that administrators and teams can't control. But he also said the Jayhawks have managed to maintain a good attitude through it all, including the start and stop of the preseason, and he thinks that’s something they can hold onto.

KU had its spring football schedule canceled because of the pandemic and also had to pause summer workouts after positive COVID-19 tests within the program. And that was before the Jayhawks opened camp July 31 with plans to open the season on Aug. 29, only to see that date pushed back to Sept. 12 and the opponent changed to Coastal Carolina.

Miles said players powered through a crisis over the course of the past several months and had to deal with “a series of decisions that are made on your behalf that you have no way to affect.”

When the Jayhawks have practiced — they spent much of the previous week doing walkthroughs and some drills without pads — KU’s second-year coach said the players have made the sessions productive.

“You have to have that consistency of wanting to fight and dig deep,” Miles said.

The coach said the Jayhawks will have some scrimmage periods later this week that will allow them to go through a lot of situations and get players important reps.

“If we can get that done and maintain some health,” Miles said, “we’re going to like where we’re at.”