What happens if an outbreak forces a Big 12 team to miss a game? 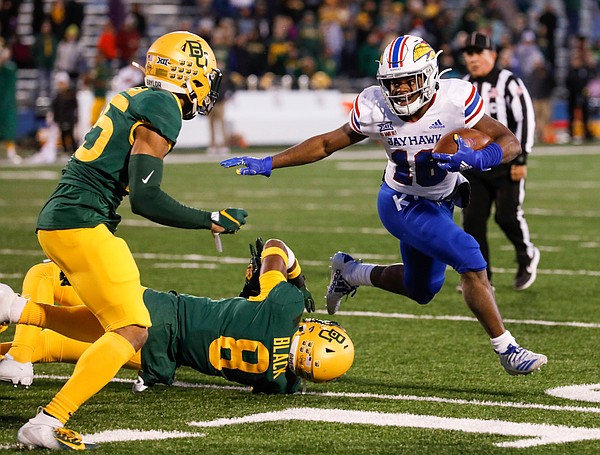 Kansas running back Velton Gardner (18) looks to make a move on Baylor Bears cornerback Byron Hanspard Jr. (25) during the fourth quarter on Saturday, Nov. 30, 2019 at Memorial Stadium. by Nick Krug

While planning a college football schedule the Big 12 hopes to play to completion during a pandemic, the conference tried to build in a little wiggle room.

The Big 12’s programs might need some flexibility after all, if a team or two have to suspend play in the middle of the season due to a COVID-19 outbreak (see: MLB’s St. Louis Cardinals).

As of this point there is no specific figure in terms of a number of infected players threshold that the Big 12 has established as a tipping point for removing a team from competition, even though commissioner Bob Bowlsby said during his media teleconference earlier in the week that the league basically expects positive cases.

Whether a team dealing with infected players is able to take the field on a given Saturday could have more to do with circumstances than a specific number of cases.

“If all your quarterbacks live together and they’re all in the same conference room and they all are all the sudden infected, it’s hard to go forward,” Bowlsby provided as an example.

So what happens exactly when a Big 12 team doesn’t have enough healthy bodies to compete?

KU Athletic Director Jeff Long said the schedule is laid out in a way the league’s administrators hope will provide some solutions.

“If a team is has an outbreak and can't play, there are options to move those games later in the season and hopefully make them up,” Long said, “and that's how they built some spacing into the season to be able to do that.”

Each Big 12 team has two bye weeks during its regular season calendar, which starts Sept. 26 and is supposed to wrap up Dec. 5.

The Jayhawks are scheduled to play at Baylor Sept. 26 and in Lawrence versus Oklahoma State on Oct. 3. Then comes KU’s first bye, on Oct. 10. It’s an open date for Baylor and Oklahoma State, too. So If one of those games couldn’t happen during the first couple weeks of league play, it could potentially be rescheduled.

“A game can be canceled both because of an outbreak we have or the opposing team we're getting ready to play,” Long said. “But either way, we would try to make that up within the confines of the Big 12 football season.”

Doing so could prove more difficult the deeper into the season these teams get. KU plays four consecutive weeks after its first Big 12 bye. If everything doesn’t go perfectly for both KU and those opponents during that time, you only have the Nov. 14 bye date, which is open for KU and its four opponents from Oct. 17-Nov. 7 (West Virginia, Kansas State, Iowa State and Oklahoma), to make it up.

If a team does have an outbreak that forces it to miss one game, what is the likelihood of the timing working out for it not to miss the following game, too?

“As we get later in the season,” Bowlsby admitted, “there may not be an opportunity for (rescheduling).”

The Big 12 wisely gave itself some potential for modification by slapping an “or” on its Big 12 Championship Game, which could be Dec. 12 or Dec. 19.

So if some teams still needed — or wanted — to make up a game late in the year, they could possibly make it happen on Dec. 12 if the Big 12 so desires to push back the title game a week.

The conference is miles away from pulling off its plan, but the administrators hope these built in open weeks for rescheduling could help make it possible. 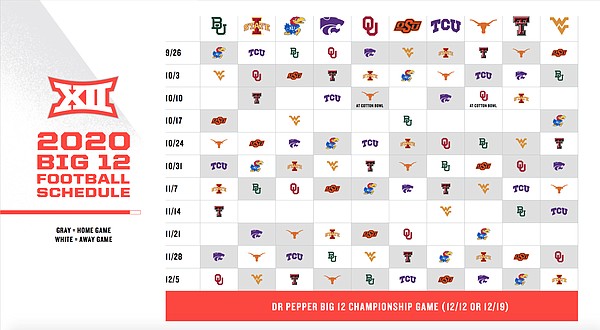 A ten game season sounds like wishful thinking. If there is college football it seems unlikely we will be able to crown a conference champion and a national champion seems out of the question. But there could be bowl games and since there are so few teams competing, KU could go bowling this year, regardless of their record.