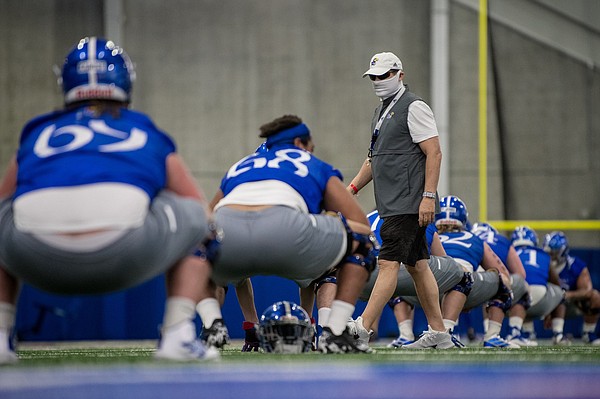 Kansas football head coach Les Miles wears a mask while walking around during an early August practice in the team's indoor facility. by Photo courtesy of KU Athletics

On a busy Wednesday in the Big 12, University of Kansas Athletic Director Jeff Long spent a portion of his afternoon over at the football team’s indoor practice facility addressing the Jayhawks.

Hours after the conference officially announced its plans to try and play fall sports during the COVID-19 pandemic, Long gave the players an update of sorts while his audience sat spread out 10 feet apart and wearing masks.

Long told reporters during a video conference he left the session certain of one thing: the Jayhawks are eager to get back to practice.

Originally scheduled to open the season Aug. 29 versus Southern Illinois, KU was able to start its preseason camp earlier than many FBS programs throughout the country this summer. But a week into those preparations head coach Les Miles and his staff had to press pause because it became clear the Jayhawks wouldn’t be able to play that soon, with the Big 12 adopting a 10-game schedule and conference games starting later in September.

While all the possibilities got sorted out and the Big 12 ultimately decided to keep playing football after the Big Ten and Pac-12 opted out, the Jayhawks weren’t able to practice.

“They've been doing walkthroughs for the last several days. I don't think they've had their uniforms on,” Long shared. “When that date got moved back there was no reason to move forward with all the padded practices and such. So now we'll get back more to — Coach Miles will put together a plan, and I haven't seen it, but I'm sure he's got a dozen different plans of when they'll come back and when they start practicing in shells and then pads and getting ready for the start of the season.”

As of Thursday the Jayhawks still had five-plus weeks to go before their new season opener, set for Sept. 12 (reportedly versus Coastal Carolina).

NCAA rules limit how many times teams can practice during preseason camp, so KU took the necessary measures to avoid any missteps.

Long said KU football didn’t have to abandon preseason camp, Miles and his staff just had to adjust.

“They went with much more time with walkthroughs and non-padded practices. But again, as we get back to closer to a normal fall camp situation — which I don't know if it's today, tomorrow, this weekend — he'll start that progression of getting into pads and padded practices,” Long said.

Miles has yet to be made available for interviews this summer.

“We had already done the five-day acclimatization period long before. We don't have to start that again,” Long pointed out, regarding a map teams have to follow before going into full-blown practices in the preseason. “We've already passed through that. So really, Coach Miles has some flexibility. And candidly looking in, I think he's given our players a good break, and we'll build them to be ready for that first game.”

On Thursday afternoon, as seen on KU football's social media accounts, the Jayhawks were going through drills without pads.

Long joked that the Jayhawks were more interested in getting back to regular camp practices than listening to him. Still, he said speaking with the team lifted his spirits.

“It made all the work behind the scenes here even that much more worthwhile,” Long said.

KU’s AD considered it a good starting point for a revised season, too.

“It feels good to be able to provide what we believe is a safe path forward for the young men to get to play college football,” he said.