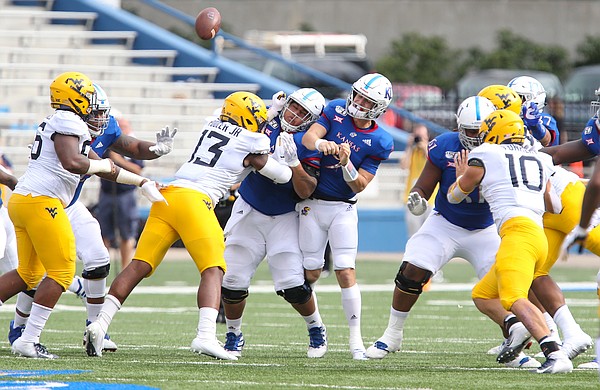 Kansas quarterback Carter Stanley (9) loses the ball as he is hit during the second quarter on Saturday, Sept. 21, 2019 at David Booth Kansas Memorial Stadium. by Nick Krug

For the first time this season, Kansas quarterback Carter Stanley didn’t turn the ball over once.

Still, the fifth start of Stanley’s senior year proved even more arduous than his touchdown-less Week 2 showing against Coastal Carolina, as the Jayhawks’ offense bottomed out at TCU this past Saturday.

KU suffered, by far, its largest margin of defeat under head coach Les Miles, 51-14, with a season-low 159 yards of total offense.

Stanley threw for just 84 yards on 29 pass attempts, completing only 12 of them. His completion percentage of 41.4% marked the worst in a start for Stanley in his college career. He only dipped below 50% in one other of his 14 starts at KU: Stanley went 23-for-48 in 2017, in his first start of that season, against Kansas State.

Against TCU, Stanley never found a rhythm, as the Horned Frogs were credited with five pass breakups and four QB hurries to go with two sacks. Stanley missed on three consecutive passes during two stretches in the loss and had five straight incompletions later on, in the second half. At no point in the game did Stanley complete more than two passes in a row.

All of that from a QB in his fifth year at KU who entered the game completing 72% of his passes this season.

What Stanley learned from the taxing outing isn’t public knowledge at this point. Typically, Stanley speaks with media members each week, a couple days after KU’s game, and fields questions about a number of topics, including what he saw — positive or negative — out of KU’s passing game after watching the game footage on video.

However, Stanley was not at the Jayhawks’ interview session Tuesday night after being requested. A KU spokesperson said Stanley had an academic commitment that conflicted with the timing of the media availability.

Immediately after the loss at TCU, in Fort Worth, Texas, Stanley told a small group of reporters that the Frogs’ athleticism on defense and coach Gary Patterson’s game plan led to the issues with the passing game.

“As players, we didn’t execute and make adjustments,” Stanley said. “It was a tough one.”

Six of his 17 incompletions came on 3rd down and 6 to go or longer. Stanley was 3-for-10 overall on 3rd downs, with one 1st down gained on a completion —late in the fourth quarter, when Stanley found freshman tight end Mason Fairchild for 23 yards.

Along with those 3rd down spots, another troubling development proved to be KU’s inability to get leading receiver Andrew Parchment involved at TCU. Stanley threw Parchment’s way 10 times. However, Parchment finished with only four catches and 10 receiving yards.

Head coach Les Miles spoke vaguely on his “Hawk Talk” radio show this week about how the Jayhawks (2-3 overall, 0-2 Big 12) could get Parchment more involved this coming Saturday, with No. 6 Oklahoma (4-0, 1-0) visiting Lawrence.

“Parchment is in the plan every week. And he will have an opportunity at balls and we will target him routinely,” Miles said. “But sometimes they can take you away. Sometimes they play two over one and that gives — and it should give — the opportunity to another player. We like our, really top three or four receivers. So I’d like to give it to Parchment, but we have players that catch it and run and can help us win.”

Parchment and Daylon Charlot (two receptions, minus-one yard) were the only KU receivers with a catch at TCU. Two of Stanley’s 12 completions went to tight ends and his four others went to running backs.

WVU game was very winnable and we made too many mistakes; therefore, I disagree it was competitive.

That's what I'm saying. We have been competitive only against BC and West Virginia.

Tough for ANY q b to succeed when he is passing on passing downs every series. Run on 1st and 2nd and 3rd and long every series is putting Carter in an impossible situation. ONE game this year the offensive play calling has been good, B C. It's been crap since. Run, run, incomplete pass, punt and defense back on the field after a 90 second drive. Go back to the RPO and throw the short hitches. Parchment and Charlot are beasts, get them the damn ball. Then run and play action. It's not brain surgery.