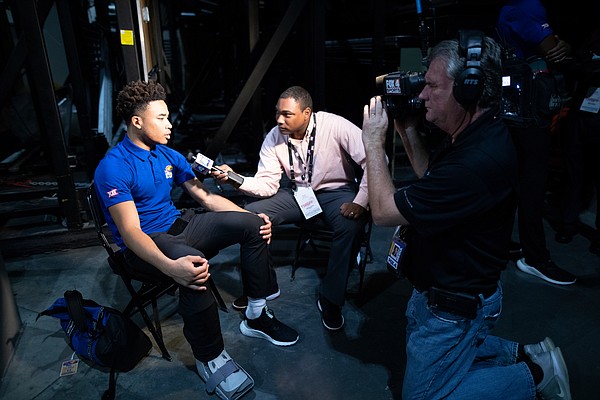 Kansas point guard Devon Dotson sits for an interview during Big 12 Media Day on Wednesday, Oct. 23, 2019 at Sprint Center in Kansas City. Dotson is wearing a boot on his right foot after sustaining an injury during practice on Tuesday. by Nick Krug

Kansas City, Mo. — This year’s Kansas basketball team wouldn’t be ranked in the top 5 in the country entering this season if it had to navigate the schedule without starting point guard Devon Dotson.

So the No. 3 Jayhawks are thankful ahead of their Thursday night exhibition opener against Fort Hays State that Dotson only rolled his right ankle when the much larger Silvio De Sousa fell on KU’s primary ball handler during Tuesday’s practice.

Head coach Bill Self wasn’t ready on the eve of the preseason warmup to rule out Dotson, but if that ends up being the case against FHSU, it would give everyone an idea of the types of lineups Self could use on those rare occasions that Dotson (32.4 minutes per game in 2018-19) isn’t on the floor.

There’s no better time than when the games don’t count against your record to experiment.

“Yeah, you could say that,” Dotson replied Wednesday afternoon at Sprint Center, when asked if a brief hiatus might prove beneficial for KU’s other point guard options, of which there really aren’t many.

Make no mistake, though, no one on the roster will become the pseudo-Dotson and try to play like the speedy 6-foot-2 sophomore from Charlotte, N.C.

“Nah, nobody,” a smiling Dotson said. “Everybody plays their own game and stuff.”

Without Dotson, junior Marcus Garrett would fill in at point guard, bringing the ball up the floor and initiating the offense. Self might not truly trust anyone else in that role — at least not in late October.

“If Devon can’t play, even tomorrow night, Marcus needs to be in the game,” Self said, “because we really don’t have a secondary ball handler that could run the team.”

That’s why these mostly meaningless reps could help the entire team. Dotson’s not going to play 40 minutes a game. There will be times in the months ahead when he has to sit because of foul trouble or some in-game injury setback. And then what does KU look like without him?

Better to get an idea now than be forced to later. It could come in especially handy for any stretches of KU’s season opener against Duke when Dotson is on the bench.

Even if Garrett’s shooting remains a question going into his junior year at KU, the 6-5 guard from Dallas is as close to a point guard as exists among the 13 Jayhawks not named Devon Dotson.

Garrett might not be so lucky to have a forward trying to defend him at point guard whenever he needs to replace Dotson this season. And that could be problematic. Self didn’t want to label Garrett a point guard, but said the junior possesses some point guard skills.

KU’s options behind Dotson and Garrett, whom Self called “without question” the team’s two best ball handlers, are scarce.

Sophomore Ochai Agbaji at least played some point — as well as just about every other position — in high school at Oak Park (Mo.). Agbaji said he would be comfortable as an offensive initiator in a pinch. He didn’t claim to be as adept a fill-in point guard as Garrett.

Although Agbaji is older, more experienced and higher in the pecking order as a starter, Self said freshman guard Christian Braun is a more likely emergency point guard. At KU’s practices, Self tries to keep his three starting guards — Dotson, Garrett and Agbaji — together in scrimmage and five-on-five situations.

That leaves the other team in those settings thin in the backcourt. So Self finds himself saying, “Christian, go play point.” As a result, the 6-6 guard from Burlington actually has spent more time playing the position in practices than Agbaji.

If Dotson can’t go for KU’s first of two exhibitions, though, Self doesn’t see it as good timing or oddly valuable.

“I would rather him be out in practice and play in games, and we can experiment in practice,” Self said. “What it does, though, is it puts you in a situation where you’re not going to play anything like you’re going to play when you play a real game. So I don’t know how much it’ll help, but certainly it’ll give somebody some experience, whether it be Christian or whoever getting the chance to play some emergency point.”

Even though the questions about worst-case scenario fill-in point guards led Udoka Azubuike to joke to Dotson, “I can run the point,” it’s safe to say point Dok won’t be making an appearance in any type of lineup combination.

Asked about the 7-footer’s bid as the lead ball handler, Agbaji looked left to size up the senior center sitting next to him, and turned back to give a Jim from “The Office” look to the cameras and reporters, as well as a one-word response.