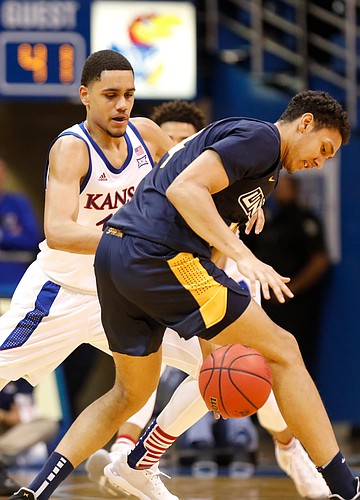 The attrition began in boot camp, when one reserve guard, Issac McBride, left the program on his own accord. Then came another blow to the Kansas basketball bench on Friday night, during the first half of the season’s second game, when freshman forward Jalen Wilson broke his left ankle.

That depth and wealth of talent the No. 3 Jayhawks boasted entering the preseason suddenly looks significantly thinner than anyone, including coach Bill Self, expected a little more than a week into November.

With Wilson expected out of the lineup for at least three months, the significance of every bench player in the rotation just got magnified.

At least a couple of them already look qualified to sub in and provide more than a breather for the starters.

Graduate transfer Isaiah Moss and freshman wing Tristan Enaruna accounted for all 17 of KU’s bench points in a 74-62 victory over UNC Greensboro. But Enaruna, who also secured five rebounds and dished a couple of assists, said he and Moss can provide more than shooting and floor spacing.

“I think something we can bring is a lot of ball movement, dribble drive to create for others,” Enaruna said of the bench duo. “Just involving everybody else who’s on the floor and making everybody else better.” 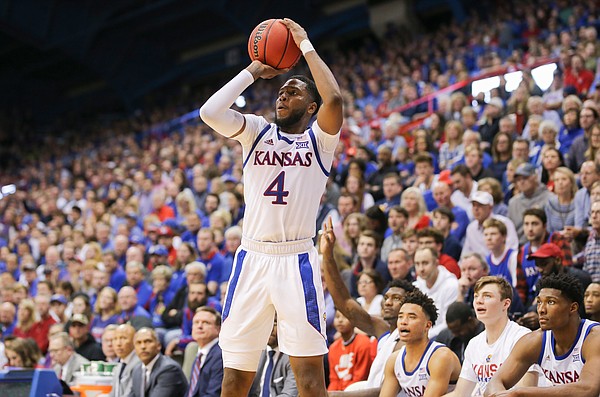 Kansas guard Isaiah Moss (4) squares himself up for a a three during the second half, Friday, Nov. 8, 2019 at Allen Fieldhouse. by Nick Krug

Both blended in ideally on offense when Bill Self opted to use four-guard lineups for all but the opening few minutes of the home opener. Moss eased into his KU debut (he missed the loss to Duke with a hamstring injury), almost going out of his way to fit in and keep the ball moving. But his natural instinct to catch and shoot showed up in the second half, and the 6-foot-5 former Iowa guard knocked down 2 of his 6 3-pointers.

Enaruna, who went 1-for-2 from deep and scored his other two baskets inside, one off a knifing drive and another on the offensive glass, expects Moss to be a staple of KU’s four-guard lineups.

“He’s a really important dude, because he really forces the defense to guard the perimeter,” Enaruna said of Moss. “Obviously he’s a great shooter. Probably the best shooter we have. So I think he’s going to help us out a lot on the perimeter with kick-outs and all that stuff, which opens up a lot for the bigs.”

Neither Enaruna nor Moss played hurried or lost, and as the Jayhawks continue to develop in this early stage of the season and beyond, Self will need both of them at their best.

At some point this season, the bench unit might include David McCormack, if Self rolls with four guards from the opening jump. For now the only big in the bunch is Silvio De Sousa, a junior still trying to find his rhythm, energy and spot in the rotation.

If Self does green light a four-guard look, either Moss or Enaruna is the most likely addition to the starting lineup. But as Self said, that would leave only one of them and Braun as KU’s guard options off the bench.

“Losing Mackey (McBride) early, we didn’t anticipate that,” Self said. “And then this, with Jalen, that’s certainly not what we thought would happen. So Tristan and Christian are going to be real important. Isaiah, we kind of know what we’ve got. When he’s healthy, he’s done it before. But those two will be real important to our success.”

KU’s bench unit could be electric with Moss and Enaruna coming in and scoring, driving and sharing the ball. But it sure doesn’t seem like they will both be reserves for long.

Shorter rotations aren’t a bad thing for basketball teams. A lot of college programs would love to be nine deep. The trick for KU is getting all the pieces to mesh together. And the most natural solution leads to a bench with basically two centers (McCormack and De Sousa) and two guards, neither of whom are point guards (Braun and either Moss or Enaruna).

Maybe Braun and De Sousa will play more in the future. But at the moment KU has a clear top seven that doesn’t include them. That all could change in an instant, or be more of a drawn-out process, depending on how both of them develop and adjust.

As KU looks for its best bench combination to materialize, Moss and Enaruna seem like players who can be trusted. Just don’t expect both of them to be 6th men all season.

It's very easy pick: Enaruna! This kid has bball IQ off the chart. He's got it all. We need to recruit more like his type: long, athletic, can shoot and move with ball. But Moss will also provide that 3pt spark we always need. He looks good already.

Let’s see how he does in Lubbock, Ames, Morgantown, and Waco.