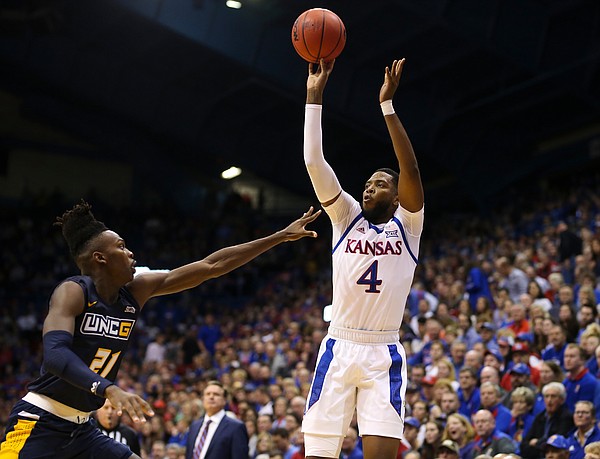 Kansas guard Isaiah Moss (4) gets a three over UNC-Greensboro forward James Dickey (21) during the second half, Friday, Nov. 8, 2019 at Allen Fieldhouse. by Nick Krug

Quick grades for five aspects of the Kansas basketball team’s 74-62 win over UNC Greensboro on Friday night at Allen Fieldhouse.

• Hey, the Jayhawks only turned the ball over 10 times.

• Even though the giveaway issues that plagued KU against Duke dissipated, the offense didn’t exactly look crisp in the first half, when the Jayhawks shot 12-for-29 from the floor. In a perfect world, KU would like to play through its 7-footer, Udoka Azubuike, inside. But teams are game planning to take him away, and KU’s players still are in the process of figuring out how to best counter the defenses they’re facing.

You could see them getting comfortable in the second half.

• UNCG threw some half-court traps at KU sporadically and KU mostly responded with poise and executed, a good sign with the Spartans assertive in their attacking traps.

• UNCG came out planning to take 3-pointers and KU’s perimeter defense was passable enough early in the first half that the Spartans opened 1-for-9 from deep. It wasn’t sound throughout, though, and UNCG made 4 of its next 7 3-point tries. The Spartans didn’t neglect the paint, either, as they spent much of the first half outscoring KU inside and keeping the game tighter than the fieldhouse fans wanted to see it.

• As the Jayhawks actually took a sizable lead in the second half after a tight opening 20 minutes, their defense made it possible. UNCG missed 9 of its first 11 shot attempts after halftime.

• The Jayhawks, as expected, started Udoka Azubuike and David McCormack again. But with UNCG not exactly able to put long combinations on the floor, Bill Self went to four-guard lineups in the first half, as soon as he went to his bench for the first time, less than 5 minutes into the home opener.

Even though Azubuike became the primary big man with four guards surrounding him most of the night, he rarely overpowered UNCG down low, where he impacted the game most by securing rebounds (10). Finally, in the latter portion of the second half, Azubuike got to unleash one of his signature slams, a thunderous attack off a Tristan Enaruna pass.

• McCormack didn’t have many opportunities to find a rhythm as he spent the majority of the game on the bench (11 minutes played).

• Marcus Garrett scored 8 of KU’s first 10 points, and that’s because he was willing and ready to cash in from downtown when he was open, knocking in his first two tries. But he spent most of the rest of the night doing Marcus Garrett complementary things that don’t show up in a box score.

• Devon Dotson looked more in command with the ball in Game 2 of his sophomore season than he did versus Duke’s defense in the opener, as one would figure. And even though Dotson looked off on his first couple of shot attempts and didn’t score until the 11:24 mark, he would carry the Jayhawks offensively in the first half.

Not only did Dotson showcase one of his best offensive traits, drawing contact and getting to the foul line, he also knocked down a pair of 3-pointers and scored on an offensive board, as he scored 14 of KU’s 36 first-half points.

The show didn’t stop in the second half, as Dotson kept adding to his stat line in every category, finishing with 22 points, 6 assists and 8 rebounds.

• Ochai Agbaji missed some good looks at 3-pointers but finished 3-for-8 from downtown. He also looks like a guard you can almost count on for multiple steals every night.

• After a hamstring injury kept him out of KU’s season-opening loss to Duke earlier in the week, grad transfer Isaiah Moss was the first man off the bench versus UNCG. Though touted as a possible 3-point weapon for this KU team which needs someone to take on that role, Moss didn’t come out firing. The veteran guard from Chicago instead gladly worked the ball around the perimeter and eased into his KU debut, opting to fit in rather than force the issue and stand out.

Moss’s first basket in a Kansas uniform came a few minutes into the second half, when he was one of the Jayhawks’ starting five out of the locker room. Moss had a toe on the 3-point line, making his first bucket a long 2. A couple minutes later, an actual catch and shoot 3 drew an eruption from the crowd.

Moss played with a bounce in his step and with his 3-point stroke looks like an ideal 6th man — if not a starter down the road. He scored 8 points in 25 minutes.

• Freshman Tristan Enaruna again looked smooth as a ball handler and driver in just his second college game. KU only scored 10 points in the paint in the first half and the most impressive bucket from that bunch came from Enaruna, who sliced through the lane to finish on the left side.

One of the loudest crowd responses of the night came after Enaruna crashed the offensive glass in the second half for a putback and an old fashioned 3-point play.

• The minutes for Silvio De Sousa were hard to find as KU ran with four guards for the bulk of the night. His best play came when he swatted a shot as a driving guard tried to go right at him.

• The KU faithful barely got a look at freshman forward Jalen Wilson Friday night. He hadn’t been on the floor a minute when he hurt his ankle and had to be helped to the locker room by KU’s trainers to get checked out. He returned to the bench on crutches in the second half.

"...he rarely overpowered UNCG down low,... " - if only coaching staff learns. Duke's defense prohibited us from passing hi-low from the beginning. It's time to play some balls. Let's outsmart our opponents instead of trying to overpower them. This is 2019, coach. Sure, Dok will get some dunks, but if he's limited to only 3-4 touches per game - that's not effective at all. If I'm not mistaken, Dok did pick and roll with Dotson beautifully - once. Only once. But that can be a game changer this season. If only coaching staff is willing to learn new things.