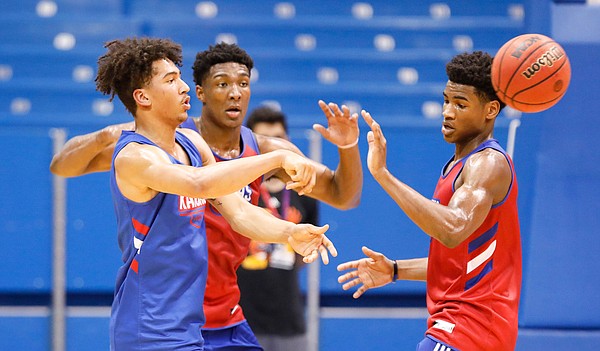 As alarming as all those turnovers were for the Kansas basketball team in its season opener against Duke, another issue that could vex head coach Bill Self and his staff all season popped up on the defensive end of the court.

No, not all bigs who space the floor are as gifted as Duke freshman Matthew Hurt. But the Jayhawks’ issues with defending the 6-foot-9 forward on the perimeter during a 68-66 loss in New York made it clear KU’s bigs can get torched outside.

The game was just 30 seconds old when the Blue Devils, as most KU opponents with a big man who can hit from outside will, tested one of the larger Jayhawks defensively. With sophomore David McCormack defending Hurt, Duke went to a pick and pop action up top. When McCormack lingered too long to prevent a Tre Jones drive, Hurt was left open for a 3. The shot didn’t fall, but it was a harbinger of what would come throughout the game, — and possibly this entire season, unless KU comes up with a workable adjustment.

Running a ball screen with a big isn’t exactly creative, but Duke didn’t need to be with Hurt. All he had to do for his first made 3-pointer was square up and jab step at McCormack.

With KU starting two big men and playing with larger lineups featuring McCormack and center Udoka Azubuike most of the night, it meant one of the Jayhawks’ post players would have to step out his comfort zone and closer to the 3-point line, where both suddenly look far less imposing.

Self never is going to ask Azubuike to chase a stretch center or power forward, so it will be up to either McCormack or Silvio De Sousa to do so, with Mitch Lightfoot redshirting.

Hurt’s third 3-point attempt came with De Sousa guarding him in the first half. Again, Duke used Hurt to screen on the ball. Although De Sousa had a little more bounce in his step as he slid and shifted to help Devon Dotson defensively against the action, he left Hurt 10-plus feet of space for a catch and shoot 3 up top, which missed.

At that moment, Self decided to play with one big, subbing Christian Braun in for Azubuike. That allowed KU’s best all-around defender, junior Marcus Garrett, to defend Hurt. Coincidence or not, Hurt didn’t try a 3-pointer with Garrett or another KU perimeter player checking him in the first half.

With KU returning to its primary two bigs to open the second half, Hurt went right back to work outside, again on a pick and pop with Jones. McCormack recovered well this time, but the mere threat of getting beat off the bounce ultimately kept him out of sorts, as Hurt jab stepped him to sleep and drained a 3.

A few minutes later Hurt found himself wide open up top when Duke center Vernon Carey Jr. first set a ball screen for Jones and then, off the action, found himself in perfect position to screen McCormack. Both KU bigs were below the foul line as Hurt rose up for a great look that misfired.

No. 3 Kansas was fortunate that so many ideal opportunities for Hurt didn’t fall. Duke again used two bigs up top versus McCormack and Azubuike late in the second half for Jones. And as the point guard utilized a Hurt ball screen, Javin DeLaurier put another pick on McCormack, freeing Hurt for a deep 3, but an uncontested one. Again, it missed.

Nevertheless, the young big remained confident, and why wouldn’t he with so many open 3-pointers coming his way. With less than 4 minutes to play, Hurt just ran his way to a 3 in transition. With McCormack trailing, Hurt raced directly to the right corner to knock down a 3 over the KU sophomore big just as he caught up.

Hurt finished 3-for-7 from 3-point range as he scored 11 points in his college basketball debut. KU didn’t have a big man that could guard him or the actions involving him on this night.

McCormack will learn from this, as will all of the Kansas bigs. Self’s two-big lineups aren’t going away anytime soon. Perhaps De Sousa can turn into the perimeter defender the KU frontcourt needs on some nights.

Until that happens Garrett can fill in as a small 4-man when a an opposing big starts cooking outside. And opponents equipped to make that happen will do so gladly for the tradeoff of KU playing without one of its large, broad-shouldered bigs in the paint.

What many people don't realize is other teams have good shooters. Looking at those GIFs again, those shots aren't that easy. I wish we kept shooting 3s, too.