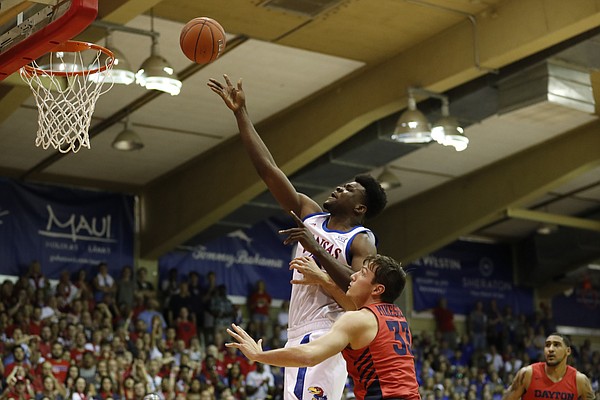 Quick grades for five aspects of the Kansas basketball team’s 90-84 overtime victory over Dayton on Wednesday in the Maui Invitational title game.

• Everyone in KU’s rotation looked up for the challenge of going back and forth in an uptempo game against a very talented Dayton team, even though the foes were playing for the third time in three days. KU didn’t turn the ball over until nearly 12 minutes into the competitive final. But five empty possessions due to giveaways, as well as a stretch of five straight missed shots, in the minutes that followed kept the game close. Dayton led 37-36 at halftime.

• KU wisely used the paint to its advantage against a Dayton team without much of an interior defensive presence. The Jayhawks’ bigs and guards alike converted inside throughout the first half, when KU scored 20 of its 36 points on layups and dunks.

• When Obi Toppin, the Maui Invitational’s breakout star, took his first breather 7 minutes into the championship game, he hadn’t scored or even taken a shot. That matchup and how KU’s stronger wings defended Dayton’s star big man — too talented on the perimeter for KU’s bigs to check him defensively out there — would go a long way in determining the game’s outcome.

KU kept Toppin without a field goal attempt until the 5:45 mark of the first half, when he rushed a 3-point try. With KU regularly doubling Dayton’s best player on the catch anywhere near the paint, Dayton had to rely on its role players.

Toppin finally got used to the defensive look late in the first half, scoring 7 points in the final 5 minutes before the break. He finished with 18 points on 6-for-11 shooting and 9 rebounds.

• Dayton’s lineup of capable 3-point shooters proved to be a problem immediately for KU. The Flyers knocked down each of their first 5 attempts from deep. They shot 8-for-18 on 3-pointers in the first half, helping them enter the break up 1 point.

Jalen Crutcher tied the game at 73 with Dayton’s 15th 3-pointer in the final seconds of regulation. They made just 1 more in OT, finishing 16 of 33.

• Throwing a half-court zone at Dayton in the second half caught the Flyers off guard for a few minutes. But the Flyers recovered a few minutes after a timeout, and found open 3-pointers to knock down, building a 63-58 lead.

• The slow start that has plagued Udoka Azubuike at times this season wasn’t a problem in the tournament’s title game. The 7-footer checked out with 7-plus minutes left in the first half, due to a second foul call on him, with 9 points.

Azubuike missed a couple of good looks on jump hooks near the midway point of the second half, but the big man barely had any other issues when he caught the ball inside and went 12-for-15 in the paint.

KU played through its big man in crunch time with a high profile tournament crown up for grabs. Azubuike dominated in the post in overtime in particular, in perhaps the best game of his career (29 points, 3 rebounds, 4 blocks).

When KU had to get a stop in the final 30 seconds of regulation, it was Azubuike who protected the rim after getting beat off the bounce for a swat that might have saved the game.

One of McCormack’s better plays came in the second half while defending on the perimeter and coming away with a steal, leading to a timely layup, with Dayton up 8 before the turnover.

• Two quick whistles against Marcus Garrett in the first half threatened to undermine KU’s chances against the talented Flyers, especially since Garrett was guarding Toppin. But Devon Dotson and Ochai Agbaji were up for the job of keeping Kansas in a rhythm. Dotson continued his Maui trend of blowing by defenders off the bounce and Agbaji defended Toppin when Garrett sat.

Although the junior guard came out aggressive offensively in the second half, twice driving for layups, he also committed two fouls, giving him 4 with more than 18 minutes to play.

Garrett returned with 8 minutes left and went back to attacking and rebounding. He also made it easy for Azubuike to find him for a game-tying layup late by flashing to the opposite block when the center got doubled. Then Garrett fed Azubuike for a go-ahead, and-one bucket inside that put KU up 3.

A ridiculous reverse layup off the bounce from Garrett (18 points, 7 rebounds) gave KU a 5-point lead in the final minute of OT.

• Dotson didn’t mind putting the entire team on his back as the Jayhawks aimed to bring a Maui title home with them on Thanksgiving Eve. The too-fast sophomore point guard blew by Dayton defenders to seek out lay-ins and trips to the foul line, making him a highly efficient scorer in a high stakes game.

Scoring a career-high 31 points, Dotson’s confidence with the ball in his hands kept the Jayhawks from buckling whenever Dayton got hot. And his 5 steals, 4 assists and 6 rebounds made for an impressive outing for the guard.

• The major knock against Agbaji was his shooting in the first half, when he went 1-for-7 and missed three 3-pointers. His work on the glass and as a passer and defender kept him on the floor and in his coaches’ good graces, even if he took a couple ill-advised shots.

• The Flyers’ bench sprinted out of the gates, looking far more productive than KU’s, with 15 first-half points, to KU’s 0. Isaiah Moss didn’t get up a shot in 15 first-half minutes. Silvio De Sousa committed an offensive foul/turnover shortly after checking in.

• Tristan Enaruna got a chance to contribute in an intense second half, after Garrett’s foul troubles made playing the freshman wing a must. He scored his first basket on a 3-pointer and at times spelled Agabji as the defender on Toppin.