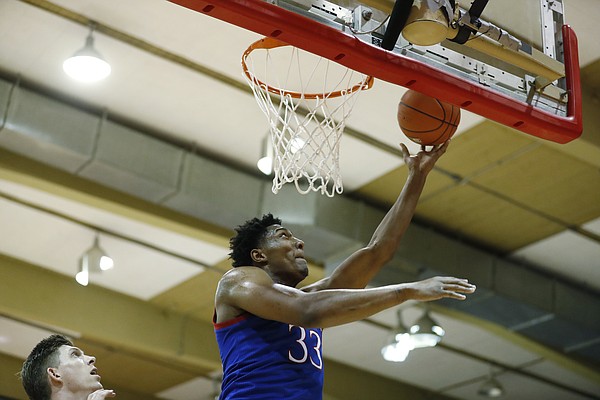 Kansas forward David McCormack (33) goes up for a shot over BYU forward Dalton Nixon (33) during the first half of an NCAA college basketball game Tuesday, Nov. 26, 2019, in Lahaina, Hawaii. (AP Photo/Marco Garcia) by Associated Press

Quick grades for five aspects of the Kansas basketball team’s 71-56 win over BYU on Tuesday at the Maui Invitational.

• An ugly first-half stretch for the Jayhawks’ offense kept the semifinal tight during the opening 20 minutes. KU missed 8 shots in a row and went close to 6 minutes without scoring during one stretch.

Even though KU had the bigs to potentially outmatch BYU inside, the Cougars often made it difficult for the Jayhawks to get the ball in their post players’ hands. So points were hard to come by as KU shot 2-for-9 on 3-pointers in the first half and only attempted three free throws.

• The high-percentage looks for KU increased in the second half, and the Jayhawks’ passing influenced that shift. Devon Dotson, Marcus Garrett, Ochai Agbaji, David McCormack and Udoka Azubuike each dished an assist as KU opened the second half 7-for-10 from the floor.

KU shot 53.1% from the field in the second half and only turned the ball over 4 times in the final 20 minutes to pull away.

• The importance of KU’s defensive work outside the 3-point line became evident quickly versus BYU, with the Cougars getting up 5 3-pointers in the first 5 minutes. BYU routinely worked the ball around to seek out open looks and the Cougars showed no hesitation to fire away when they found an open man.

BYU went 3-for-9 in the opening 10 minutes, and KU was fortunate that some of the Cougars’ good looks didn’t fall. The Jayhawks spent the better part of the next several minutes limiting BYU’s 3-point opportunities. But a late half flurry — 2-for-5 in the 3 minutes leading up to halftime — cut into KU’s lead.

• BYU missed its first 10 3-point tries in the second half, as KU got out to a comfortable lead. Some were open, on some KU’s defense deserved at least a little credit for the shots not falling. The Cougars only made 9 of 33 (27.3%) from long range in the loss.

• Even though much of the BYU offense is built around back cuts and passing, the Cougars turned the ball over 20 times and scored just 18 points in the paint.

• KU only got two made shots at the rim apiece out of its biggest players, Udoka Azubuike and David McCormack in the first half.

The Jayhawks made sure to change that in the second half, with layups and dunks from the two bigs helping KU build its first double-digit lead.

• McCormack found a rhythm as a scorer, putting up a team-high 16 points, while showing some touch as KU advanced to the Maui Invitational final and a matchup with Dayton.

• Ochai Agbaji did much more than put up points (14), but the sophomore did a bulk of that work, too, in a low-scoring game.

Agbaji’s rebounding and passing came in handy, but so did his his hustle.

• Devon Dotson (13 points, 5-for-16 shooting) took it right at the BYU defense off the bounce early, proving his handles and speed in the open court could be a problem for the Cougars. But some missed layups by the point guard kept him from destroying BYU the way it seemed he might.

Even so, Dotson had one of his better distributing nights, racking up 8 assists.

• Marcus Garrett’s workmanlike approach to the opening minutes of the second half allowed KU to build its biggest lead of the game up to that point, before the first media timeout. Garrett’s passing, driving, defense and even a 3-pointer turned a tie game into a 38-31 KU lead.

• With Isaiah Moss off offensively, KU got little production from its subs. Moss knocked down his first attempt, a 3, of course, in rhythm but couldn’t replicate that moving forward. He finished the win shooting 2-for-8 from the floor.

Still, Moss is a good fit for the KU offense’s spacing and flow, and the Jayhawks’ lead grew when he was on the floor.

• Silvio De Sousa barely played until the game was all but over (3 minutes).

Tristan Enaruna wasn’t creating as much as he can offensively.

Moss (5 points) was the only member of the bench who had scored much of the night. But Christian Braun finished an alley-oop pass on a break from Dotson in the final minutes and Enaruna hit 3 of 4 free throws.

I think I'd give them more than a B+ on defense. BYU didn't score their 10th point of the half until the 13 minute mark.

Coach Self thought the D was excellent.