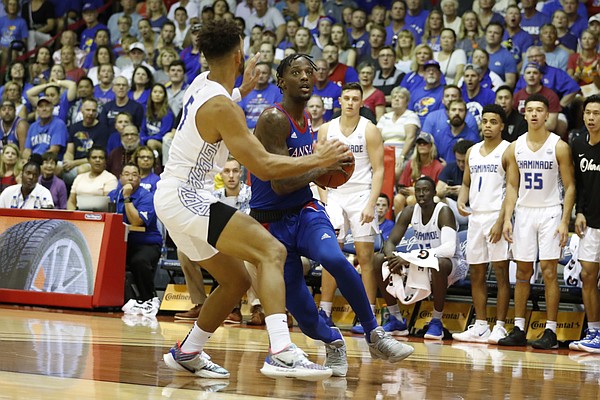 Quick grades for five aspects of the Kansas basketball team’s 93-63 win over Chaminade on Monday at the Maui Invitational.

• Down 5-0 early to de facto host Chaminade, the Jayhawks regrouped quickly enough, taking their first lead on their first made 3-pointer, 10-7, from Ochai Agbaji, who had been in a noted slump.

That shot seemed to ignite the Jayhawks and/or loosen them up, with an Isaiah Moss triple to follow. Devon Dotson connected on a 3 of his own shortly after amid a 17-0 outburst.

• The Jayhawks spent most of the night — afternoon if you’re on island time —dominating the way they should in this type of matchup. They shot 55% from the floor, helped greatly by their 50 points in the paint and 36 points off turnovers.

• Kansas proved more than reliable from 3-point range, going 12-for-29.

• KU’s defense wasn’t great early, but good enough to keep its opponent from playing cleanly. Chaminade helped the Jayhawks build a comfortable first half lead by turning the ball over far too often. KU got credit for 5 first half steals but the Silverswords turned it over 16 times in the first 20 minutes.

When Chaminade was actually taking care of the ball, its guards were driving and getting more layups than Bill Self would like to see. Chaminade shot 48% from the floor in the first half — but KU led 47-27 at the break.

• Even though KU had the obvious size advantage inside with Udoka Azubuike and David McCormack, neither played particularly well in the first half against the Silverswords’ mostly perimeter-based lineup. Azubuike checked out with nearly 13 minutes left in the first half and wouldn’t return until after intermission. He turned the ball over twice, fouled twice and didn’t attempt a field goal in 7 first-half minutes.

The 7-footer came out intent on doing much more with his time on the floor in the second half, with a pair of layups and two overpowering dunks in the the first 7 minutes, en route to 15 points.

• McCormack only played 8 minutes in the first half, with one offensive rebound and a couple of buckets being his largest contributions.

He would have a much more emphatic attack of the offensive glass as KU was rolling late in the second half, and his two-handed follow rattled the backboard. Within a few minutes he added two more baskets inside, getting him to double digits for the game.

• KU guards Dotson and Marcus Garrett helped get the heavy favorite out in front, as they did a good job of attacking the paint early, combining for five of the team’s first six successful trips to the rim.

Dotson’s speed meant he kept getting layups and he could have gotten more if KU needed them.

• Ochai Agbaji's shooting slump didn't travel to Maui. The sophomore shot 3 of 5 from deep in the first half, a good sign for sure, even if all 11 of his points came before halftime.

• Garrett was a distributor (7 assists) and disruptor 4xx steals) continuing to shine as an ideal role player.

• KU’s guards stood out in the first half and then gladly let the bigs take the spotlight in the second half as KU cruised.

• Once Moss joined the fray in the first half, KU began to roll. His shooting made him an ideal floor spacer for the offense and the Jayhawks took off once they went away from their two-big look.

Moss provided 13 points off the bench and drained 3 of his 4 3-pointers.

• Tristan Enaruna was off the mark much of the game, starting 0-for-5 from the floor before knocking in KU’s 11th 3-pointer of the rout. The freshman again made himself valuable with his passing and defense, though, regardless of his shot outcomes.

• Silvio De Sousa’s minutes were limited. He scored all 4 of his points in the first half.

A good win! Dotson played great on offense & defense. But I wish he has better court vision. About 3min before 1st half ended, Enaruna was ahead of everybody else, Dotson still dribble to push ahead instead of passing/lobbing to Enaruna. Dok had established nice position under the basket, 5min into 2nd, again instead of passing to Dok, he passed it to the left wing. I have high expectation of him to make the team better because he's got all the tools to do it.

Garrett & Enaruna have been so consistent - they're not necessary high scoring players - but their sharing ball/assists make it easy for the team to score. Zero TO, 7 asst by Garrett! Keep it up, Marcus!