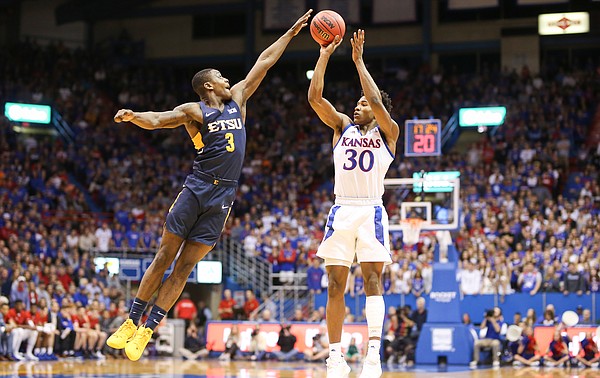 Kansas guard Ochai Agbaji (30) has a shot blocked by East Tennessee State guard Bo Hodges (3) during the first half on Tuesday, Nov. 19, 2019 at Allen Fieldhouse. by Nick Krug

The Kansas basketball team knocked down double-digit 3-pointers in a pair of early November victories. However, it doesn’t sound as though Bill Self is expecting the Jayhawks to have that type of output every time they take the floor.

They were nowhere near that territory in their third win of the season, when KU’s shooters combined to make just one of their 14 long-range looks in a win over East Tennessee State.

It was the worst 3-point shooting night for KU since March of 2015, when the Jayhawks went 0-for-8 in a Big 12 Tournament win over TCU.

The way Self described KU’s shooting, though, it would seem he doesn’t anticipate the 3-point arc becoming a source of consistent offense this season.

“We can be a team that can shoot 35 percent from 3, 36 or 37 if we shoot it well. But we can have some bad nights, because we’re streaky,” Self said. “Certainly those nights you need to throw it inside, and fortunately we were able to do that.”

Indeed, KU slobber-knocked ETSU in the paint, 54-24. But future opponents will play better transition defense and do a better job of keeping Udoka Azubuike from getting as many touches inside.

Then what? At some juncture of the season, KU will have to knock down 3-pointers to win a game, whether it’s those actual shots making the difference or their ability to connect opening up the floor by stretching the defense and giving Azubuike space to catch and finish.

A career 39.6% 3-point shooter, graduate transfer Isaiah Moss shouldn’t have many nights like his 0-for-2 outing versus ETSU. He had a great open look from the right wing that rimmed out near the 11-minute mark of the first half. Almost 10 minutes later he got an even better view of the hoop from the left corner but missed again. 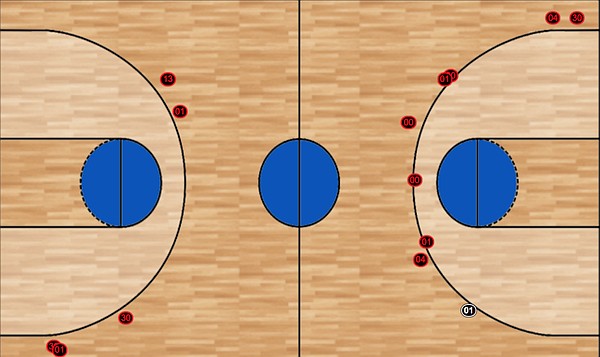 The KU basketball team's 3-point shot chart from a win over East Tennessee State, via StatBroadcast. The Jayhawks shot 1-for-14 from deep in a win.

Moss played too loose with the ball in the second half, with two poor turnovers, to stay on the floor. That’s something the 6-foot-5 guard from Chicago will have to rectify. KU needs him on the court, playing within the flow of the offense and taking the type of open looks he should keep getting off drive and kicks from Dotson, Garrett and Enaruna, or from defenders clogging the paint to limit Azubuike.

The season is too young to project what type of shooting years sophomores Dotson and Agbaji and freshman Enaruna will have. But banking on either Dotson or Agbaji to make a leap as an effective outside shooter would seem premature. Dotson shot 36.3% as a freshman, and Agbaji finished at 30.7%.

If none of those three returning rotation players improve from long range, it may fall on Moss — and maybe Enaruna (3 for 6 this season) — to make defenses respect KU’s shooting.

Most of KU’s 3-point attempts versus ETSU could be charted as good offense. Percentages even indicate that more of those very same shots will fall on other nights.

Only one failed 3 designated as a truly bad decision. Agbaji forced one on the wing and had it promptly smothered by his defender, a rare blocked 3-pointer.

A few others were debatable to marginal. Dotson, who already had made one, took a higher degree of difficulty 3 off a ball screen, leaving a step-back attempt short. The sophomore point guard also dribbled into a missed 3 up top, late in the first half, with a defender sticking to him and 10 seconds left on the shot clock.

In the second half, with ETSU surging off of its 3-point makes, Dotson went for another 3 he could have easily passed up. Dotson hadn’t even used a dribble on a catch in the left corner but settled for a contested try with 17 seconds on the shot clock. Dotson’s fourth and final miss came at the top of the key, with 5 seconds on the shot clock and a little more than 2:00 to play. After using a ball screen from Garrett he settled for an NBA range 3 with a hand in his face instead of driving to create a better shot for himself or a teammate, or perhaps drawing a foul.

Every other KU 3-point try at least made sense within the offense and the moment. KU’s lone make was a quick catch-and-shoot for Dotson off a simple pass out to the perimeter from David McCormack at the foul line. And 8 other KU misfires looked similar, in that they wouldn’t qualify as a bad shot.

Though Garrett missed both of his tries, each came in rhythm and with the defense sagging off of him. They were good attempts he’ll need to continue to take with confidence. Even Enaruna’s air-balled 3 in the final minutes looked natural and open as he caught a pass and elevated. The execution was where he was lacking.

As Self referenced, the Jayhawks shouldn’t be this far off the mark again. Dotson said something similar.

“There’s going to be some nights like that. But we’re going to be fine. In practice we knock them down,” Dotson added. “We’ve got to bounce back.”

I would expect each player to be a little better each year.