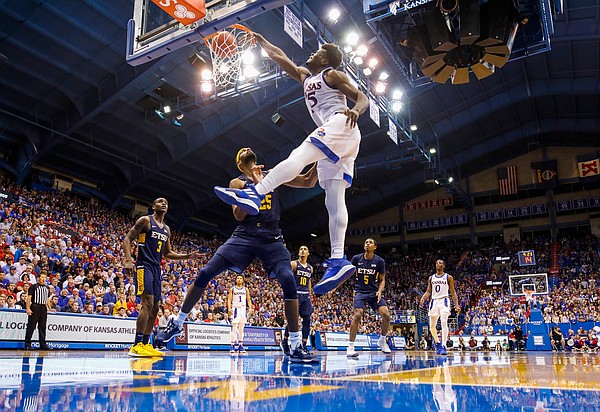 Kansas center Udoka Azubuike (35) powers in a dunk against East Tennessee State center Lucas N'Guessan (25) during the second half on Tuesday, Nov. 19, 2019 at Allen Fieldhouse. by Nick Krug

Grades for five aspects of the Kansas basketball team’s 75-63 win over East Tennessee State on Tuesday at Allen Fieldhouse.

• The Jayhawks dominated in the paint throughout their final tuneup before the Maui Invitational, where they had a 54-24 scoring advantage.

But they weren’t nearly as effective from outside, which kept the game close. KU shot just 1-for-14 on 3-pointers. Devon Dotson knocked down one early, but he and everybody else in a KU uniform spent the rest of the night off the mark.

• KU’s 15 turnovers qualified as a concern, as well. With 9 giveaways in the 2nd half, coupled with some ineffective shooting as ETSU surged, the victory didn’t exactly feel like a certainty.

• The Jayhawks filled up the blocks and steals column versus ETSU, with eight swats and 14 swipes.

• Limiting the Buccaneers, who had some length and athleticism on the floor, to 7 second-chance points helped assure KU of a win, too.

• Recently the at times clumsy looks between KU’s starting two bigs, Udoka Azubuike and David McCormack, made the offense difficult to watch when they shared court time. On this night, early on they looked far more functional together. Azubuike’s passing has been more impressive this year, and he worked in tandem with McCormack on a couple of occasions early. Even though KU didn’t stick with the duo for long they looked more suitable than usual.

• Before long, Azubuike became unstoppable offensively — other than the free throw line, where he shot 1-for-4. In the second half in particular, Azubuike made sure to take advantage of how ETSU covered him and sought out devastating finishes, which also ignited the crowd and gave his teammates energy.

• McCormack only played 12 minutes and finished with 4 points and 3 boards, while Azubuike went for 21 points, 7 rebounds and 4 blocks.

• Devon Dotson (19 points, 6 assists) came out hot and allowed the Jayhawks to get comfortable by scoring, passing and making sure KU got transition looks.

• Marcus Garrett (13 points, 6 rebounds, 3 assists) wasn’t an ideal backup point guard when Dotson had to sit with some foul trouble early in the second half.

• Ochai Agbaji, while able to deliver on a high degree of difficulty reverse layup, continued to be in a little bit of an offensive slump early in the season, going 2-for-8 overall and 0-for-4 on 3-pointers.

• Silvio De Sousa had been on the floor about 8 seconds when he went up high to finish a slam off a pass from Dotson and inject some energy into the lineup.

A starter in KU’s rout of Monmouth, De Sousa was back to a reserve role and entered at the same time as two other potentially superb subs, Isaiah Moss and Tristan Enaruna.

Moss was the only one truly off, coughing the ball up a couple of times in the second half and missing his two 3-point attempts.

De Sousa played the final 5-plus minutes at center and was credited by teammates and Self alike as a major reason KU prevailed. The junior big put up 8 points, but also blocked three shots and gave an electric fast break finish in a tight game late.

Enaruna proved trustworthy and able to do a little of everything, with 4 points, 4 assists and 4 rebounds.

Marcus should be our PG - I'd say grow him in that direction, we'll see higher scoring. But he needs to do elite PGs would do - watch Graham's tapes. Marcus should be practicing more fakes, unpredictable moves. He's a happy disher. But he has to wreck havoc opponent defense first. DDot can do the later, but way too concern in scoring.