KU's bench trio should be devastating before long 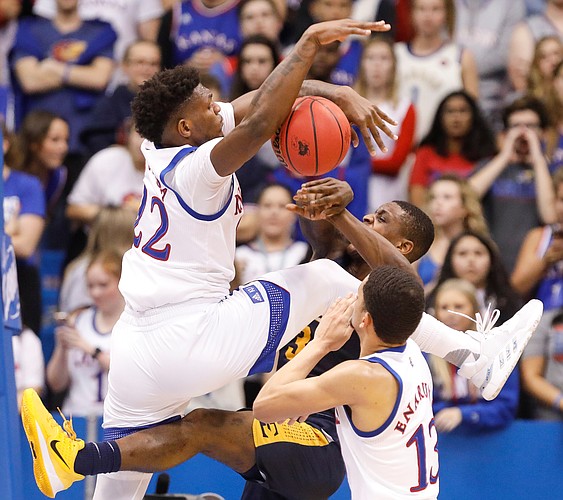 Some college basketball coaches go to their bench begrudgingly. The starters start for a reason and when they rest it’s out of necessity.

Few coaches can turn to one reserve, let alone two or three, and trust that something positive is about to happen as a result.

But Bill Self might be in that enviable position before long, a rare coach able to look down his bench and see a variety of subs he would even gladly insert into the starting lineup in a pinch.

And if Tuesday night’s matchup with East Tennessee State was any indication he’ll need that to happen sooner rather than later.

Too often the No. 4 Jayhawks needed team leaders Devon Dotson and Udoka Azubuike to save them in a 75-63 victory.

They have capable bench players who should spend most of this season making Dotson’s and Azubuike’s responsibilities feel less burdensome.

Silvio De Sousa, Isaiah Moss and Tristan Enaruna were simultaneously the first backups to check in versus the Buccaneers. And the moment the trio hit the floor together it was easy to convince yourself a bench lineup with those three would give any team in the country problems.

At his best, De Sousa, a 6-foot-9 junior from Angola, is all energy all the time. Especially in a reserve role, as he was in the Jayhawks’ bon voyage victory before they head to Maui, De Sousa can exert himself with no boundaries, nor worries about wearing down.

His instant impact showed up the moment he stepped onto the floor, a little fewer than six minutes into the first half. Devon Dotson ran a pick and roll with De Sousa and the big threw his right arm up as he headed toward the paint, indicating he wanted the lob. Dotson delivered, and so did De Sousa, flushing it through.

KU’s lead went from three to nine in a hurry with its best bench players influencing the flow. Enaruna made his presence felt next, utilizing those long arms of his and turning a swipe on one end of the floor into a layup for himself on the other.

Moss was the only one of the three not to score in the first half. But after his 21 points in 15 minutes showcase game against Monmouth, it’s hard to doubt him as an impact backup.

A 6-5 senior who already graduated from Iowa, Moss isn’t perfect. He might even need a reminder on an out of bounds set from time to time about where to line up. But it’s still November, and he is a veteran who will have all that figured out sooner rather than later. 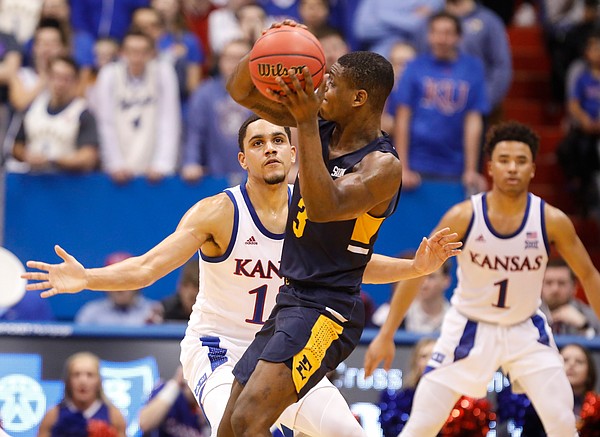 Kansas guard Tristan Enaruna defends against a pass from East Tennessee State guard Bo Hodges (3) during the second half on Tuesday, Nov. 19, 2019 at Allen Fieldhouse. by Nick Krug

Enaruna is an ideal utility wing. He doesn’t just shoot. Or just defend. He gladly does a bit of everything. The freshman, like the older Moss, blends in on offense. Enaruna can even create off the bounce. Late in the first half the versatile wing from the Netherlands attacked from the left side of the floor, spun to get in the paint and then threw a pass no one except Udoka Azubuike saw coming, freeing the 7-footer for an uncontested dunk.

In crunch time, De Sousa soared in transition while filling in for Azubuike at center. He caught a lob from Dotson off a sprint that rocked the fieldhouse. Shortly after, he blocked a 3-pointer when those shots in particular from ETSU were the ones narrowing the gap.

In the final two minutes, De Sousa twice wisely caught a lob high and returned to the floor instead of forcing an off balance attempt, and he went right back up for a lay-in each time. After the first one, he ran down the floor on defense to block a shot.

“He was great,” Dotson said of the junior big man in the game’s final minutes. “He made some great hustle plays and got his hands on a lot of balls out there, so he was very active. He helped us out a lot down toward the end.”

Azubuike agreed: “After I got subbed because I got tired he came in and brought energy and pretty much helped us win the game.”

Self, of course, thought Azubuike (21 points) was KU’s best offensive player against ETSU. But the coach also said De Sousa had as much to do with the win as anybody on the roster.

“He hadn’t had a chance to play. I put him in and defensively he was terrific,” Self said of De Sousa. “Blocked maybe three shots in the last five or six minutes and then had one great finish. That was probably the best play of the game,” Self added of the big man’s race in transition for an alley-oop. “It was good to see, because he really hasn’t had a chance to contribute in a way I know he’s capable of and he knows he’s capable of.”

With KU up five points and 5:44 left to play, Self subbed in De Sousa for Azubuike.

“I just think that he trusts me and he wanted to see what I can do,” De Sousa said of the opportunity. “I personally think he wants to try to test me.”

After De Sousa, who scored 8 points on the night, contributed a steal, two baskets, and was credited with two blocks and a rebound during the final minutes, he thought he performed pretty well on that test.

It’s way too early to call KU’s bench unit a great one. It wouldn’t be true at this stage of the season, either. ETSU outscored KU’s bench 19-14.

When the game felt a little tighter in the second half, after ETSU sliced into KU’s double-digit lead, Moss turned the ball over a couple of times, blowing transition opportunities.

“I think he got a little out of whack,” Self said of Moss, who had 2 points in 17 minutes. “He didn’t make a couple open looks and then his ball handling in the second half was real poor… Isaiah’s got to be better with the ball. He was just too careless.”

Plus, Moss needs to be — and can be — KU’s 3-point specialist. The Jayhawks finished the night 1-for-14 from deep and Moss missed his two tries.

Enaruna, who scored 4 points and added 4 assists and 4 rebounds, air balled a wide-open 3 with KU up 11 in crunch time, too.

We don’t even know if all three of KU’s best substitutes will spend all season in their current roles. Yet they’re so promising as three jolts of energy off the bench that they should think of themselves as players who need to be as reliable as Dotson and Azubuike — even if they don’t play as many minutes.

They bring so much to the table between them that they should be a solution game in and game out, and not a problem.

Give them time. By late January leads won’t be in jeopardy with these three on the floor together. And deficits will erase rather than grow larger.

I will admit for a long time guys coming off the bench was just to relieve for minutes. Now you can play guys almost 15 to 18 minutes off the bench because they have few liabilities, this will be enormous in big 12 play on the Road. Having many options to go to if someone is struggling.

Shouldn’t leave Christian Braun out of this story. See him being a big contributor off the bench as the season moves along.

Braun will contribute as much as his D allows. At least that’s what I got from Coach Self’s comments, and his own, a few days ago.