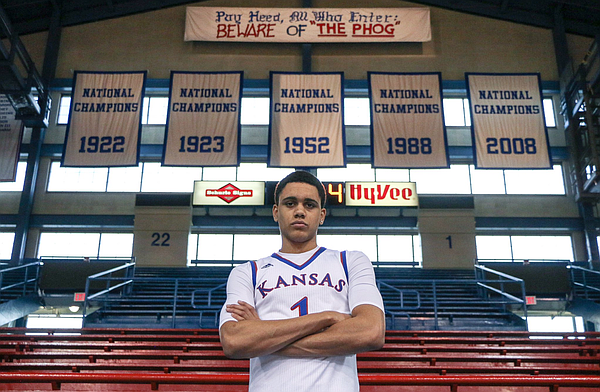 Four-star Class of 2019 prospect Tristan Enaruna attached this photo to the Twitter message he sent announcing his commitment to Kansas on Tuesday, May 7, 2019. Enaruna is a 6-foot-9, 205-pound forward from Netherlands who played his high school ball at Wasatch Academy in Mount Pleasant, Utah. by Photo courtesy of @TristanEnaruna

Though the state of the Kansas basketball roster remains in a bit of flux roughly six months before the 2019-20 season officially begins, one definite Jayhawk who seems capable of cracking the rotation is freshman Tristan Enaruna.

Originally from the Netherlands and more recently a four-star prospect at Wasatch Academy, in Mt. Pleasant, Utah, Enaruna won’t arrive in Lawrence ready to dominate, or even start. But the Dutch forward sure looks and speaks like the type of player Bill Self will love to coach.

When KU announced that Enaruna signed his letter of intent, Self invoked the names of Kelly Oubre Jr. and Andrew Wiggins while trying to give KU fans an idea of what to expect from the freshman, at least from a “size, athletic ability and skill set” standpoint.

It’s important to note at this point that Self wasn’t labeling Enaruna as a one-and-done 2020 first round NBA draft pick to be by mentioning the new signee in the same breath as Oubre and Wiggins. Enaruna has been on the international basketball radar for a few years now, but the intrigue surrounding him remains rooted in what he may one day become.

Sure, if you squint your eyes just right while watching Enaruna highlights he may sort of resemble Oubre or Wiggins while rising up for a fastbreak jam. However, it seems far more likely that during his freshman season at Kansas Enaruna will favor those two most as a long, athletic wing defender.

Earlier this year, months before Enaruna committed to Kansas, he was in Charlotte, N.C., for the Basketball Without Borders international showcase. It was there that he spoke in detail with ESPN NBA Draft analyst Mike Schmitz about his game.

After exhibiting his abilities in a gymnasium occupied by numerous NBA scouts, Enaruna said his plan was to play aggressively on both ends of the floor.

“A few years ago I was relying too much on offense. If my offense didn’t go well then my defense was probably pretty bad, too. So I worked on that,” Enaruna explained.

According to what the young prospect told Schmitz, he had trouble finding a rhythm during the first half of his senior season at Wasatch Academy, but his game improved during the second half of the schedule by playing “tougher.”

So Enaruna is an incoming freshman who apparently values defense and toughness? It’s hard to imagine a better route to playing time on a Self coached team.

While Enaruna also professed to be a more consistent shooter now than he was a few years ago, his defense will probably be ahead of his offense as a first-year player at the collegiate level. And if he’s consistent on that end of the floor, with his 6-foot-8-ish frame and reported 7-foot wingspan, Enaruna should get to play through more offensive missteps than your typical KU freshman.

Enaruna, like most college basketball players with a pulse, has NBA dreams. In fact, it may be his confidence and willingness to combat on the defensive end of the court that eventually gets him that far.

When Schmitz asked him at Basketball Without Borders about how he thought he would fit into today’s NBA, Enaruna’s response pointed to the “positionless" nature of the game, with bigs capable of driving and shooting.

“You have to be able to guard multiple positions. And I think that I’ll fit in that situation pretty good,” Enaruna said.

While YouTube highlights of Enaruna show him doing plenty offensively — pulling up for 3-pointers, finishing above the rim with his long arms, driving past lazy defenders, attacking off the bounce and dishing to teammates inside and more — it’s hard to watch many of those clips without hearing Self’s voice say “that’s not ball” regarding the level of effort being exerted by some of Enaruna’s victims.

For as smooth as he looks with the ball in his hands at his edited for YouTube best, it will be the not as clickable dirty work on defense — in which Enaruna seems to take great pride — that will make him valuable for KU next season as a reserve.

I dont think defense will be a problem for next years team..with Azibuike, Lightfoot, Garret and Doston, they will guard people....but their guards have to be more reliable from 3....

Great building blocks for the next couple years! And I don't think Spring Self is done doin damage yet. Rock Chalk!

For each front court player we sign, it almost demands we sign an equal or greater back court recruit. We really need Hampton.