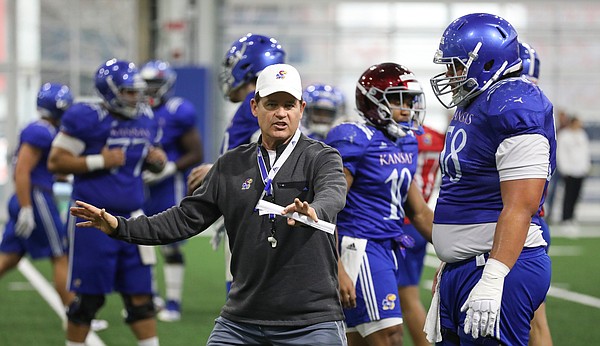 As optimistic as Les Miles has professed to be regarding the talent level of his first team at the University of Kansas, the one-time national championship winning coach undoubtedly is undertaking as massive of a rebuilding project as exists in college football.

In Miles’ 15 full seasons as a head coach — four at Oklahoma State and 11 at LSU — he averaged 9.3 wins a year and 3.5 losses. The KU football program has experienced nine or more wins in a season six times since its inception in 1890.

Every year administrators who run some Power Five programs attempt to reboot by firing the current head football coach and finding a replacement they envision turning the team’s fortunes around. Among the men hired to do so since the end of the 2018 season, Miles’ task might be more daunting than most.

While discussing recently on the “AP Top 25 College Football” podcast which head coaches entering their first year in new situations have their work cut out for them, Bruce Feldman of FOX Sports and The Athletic painted a darker picture of what may await the Jayhawks this coming fall than many of the program’s supporters would like to see.

Why the pessimism for Miles in Year 1 of what The Mad Hatter hopes will be a successful longterm renovation?

“He’s not working with anything close to what he’s used to from his LSU days,” Feldman said. “I mean, it’s the complete opposite.”

Outside of KU’s nine Big 12 games on the schedule the Jayhawks will face Indiana State (Aug. 31) and Coastal Carolina (Sept. 7) at David Booth Kansas Memorial Stadium before playing their nonconference finale at Boston College (Sept. 13) on a short week.

“I think they’re going to beat Indiana State and Coastal Carolina,” Feldman predicted. “But then they’ve got to go to BC, who’s not great, but they’re not terrible. And it’s on the road, so I think they’ll probably struggle.”

This past season, Boston College finished 7-5 and spent four weeks ranked in the AP Top 25. The Eagles went 5-2 at Alumni Stadium, in Chestnut Hill, Mass., with their home defeats coming to eventual national champion Clemson and a nationally ranked Syracuse team.

So if KU were to open Miles’ debut season 2-1, there must be some victory for the Jayhawks in Big 12 play if they’re going to add a third win. Who might they beat?

The way Feldman sees it, new head coach Neal Brown’s first year at WVU won’t be easy, either. While the Mountaineers won seven or more games in eight of the nine seasons that Dana Holgorsen was in charge, Feldman pointed out Holgorsen left for Houston just when the WVU program was losing some of its most talented players.

Other than KU and WVU, Feldman went on, he doesn’t think there will be any other teams in the Big 12 this year that are “really, really bad.”

Feldman and the podcast’s host, Ralph D. Russo of the Associated Press, speculated that Scott Satterfield at Louisville and Mike Locksley at Maryland have challenging rebuilds on their hands, as well.

Though while discussing the Terrapins’ situation, Feldman opined that Locksley is inheriting better players than Brown at WVU and “way better” players than what Miles has inherited at KU.

Really going out on a limb there Feldman.

The Senior Class is Huge, Over 25 schollies, full of transfers that have been around now for two years. HCLM will take the plays from last year's play book that he likes and will add in some major parts of his playbook to ease in transition. Add in some of the younger talent we have, eliminate some on-field mistakes, eliminate horrible game coaching decisions, decide on one starting quarterback and stick with him, and KU is going to play some very close games and pull out one or two upsets.....I'm hoping!

And...just guessing, it will be his second year that will be toughest where he will only win 4 before going to a bowl game in year three.

Who cares what he says. We’re having fun for the first time in a while!

Don't think he took Pooka into consideration. If he is back, he is one of the best offensive weapons in the Big 12. If that offense does 80% what they did @ OU last year, they will win games.

Why on earth would anyone thing KU will NOT struggle this next season? Yes, we'll be better but we're playing in a very tough conference. I'll be happy with 3 solid wins and a few very close losses for the first season. And then upwards from there, especially if we can get back to a full scholarship allotment soon. Last I heard there was thought about the NCAA rethinking how that is done but have heard nothing more about it and it's doubtful it would in time to help KU anyhow.

Winning 2-3 games is better than our average over the past 10 years. Winning 4 will get KU fans fired up, winning 6 would drive KU crazy.

The BC game is a big one. Win that one, on the road, against a competent team and you will have a pretty full stadium for the WVU game. Go 4-0 and who knows what might happen? Winning four games and being competitive during the season will hold a recruiting class together, for the most part.

My guess is we play some very vanilla football prior to the trip to Chestnut Hill. In fact, I could see a two-game Pooka suspension. If BC is flat, we surprise them and we get a lead, things could turn our way.

I'm guessing the Vegas over-under will be at 2.5 - and for good reason. I'm betting on 4 wins because I think the experts are under estimating Miles' abilities and his motivation. A good coach with a good plan can make a 2-game difference in one year. He's got a chip on his shoulder. He clearly loves the game. He loves his players. He'll be a difference maker this year.

I predicted 2 or 3 wins.....if all the stars align, we could get 4. It will take awhile, just have to be patient

Really, KU is going to struggle in football. Next thing you will tell us the earth is round, the sun rises in the east and the moon isn't made of green cheese.

So, if I read Feldman correctly, there's little if any change from last year in talent, conference challenges and pre conference schedule. Does that mean there are no real changes in the coaching talent too?

I like the way the SEC schedules its non cons. Most of the teams in the league schedule a cupcake in the middle of the season, I suspect for the purpose of giving themselves a bye week. I would wager that KU would have more wins against our non con opponents over the last decade if we had played some of those teams after first playing half a season of Big 12 opponents.

The MAD HATTER will get it done in time. Not using three timeouts in the first quarter and having eleven players on the field and not nine or twelve will be an improvement. The offense has a chance to be good, especially adding Pooka. The defense will struggle but what's new? KU was a garbage performance vs Nichols and dropped pass vs KSU from winning five last season. Four would be excellent improvement this season. One thing for sure is that Mile's players will play their a**es of for him and that will also be a nice change.

The caption is interesting and not sure if it was obviously intentional or just an accident. I doubt we win the NC, but I expect to be competitive. We may not win the B12, but I hope we can be competitive and at least make some noise in the 4-5 spot of the B12. We've been so close making a strong showing and then it seems the last half of the season tanks.

I can't wait to see Miles play against OSU.

Give me a a break!You are going to judge before he even plays a game?Wow! Pathetic!