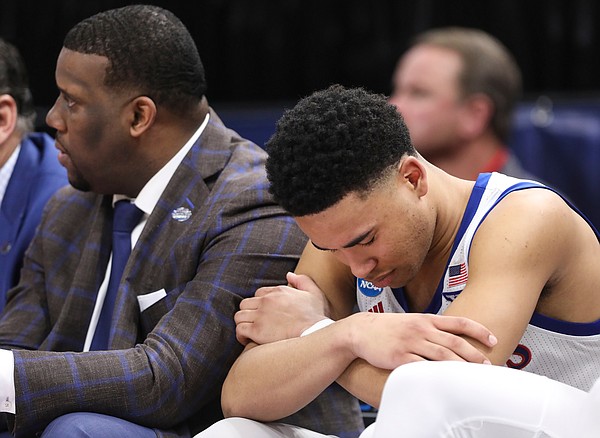 Kansas guard Devon Dotson (11) hangs his head on the bench after fouling out during the second half on Saturday, March 23, 2019 at Vivint Smart Homes Arena in Salt Lake City, Utah. by Nick Krug

As much as the Kansas basketball players who lived through Saturday’s second-round NCAA Tournament encounter with Auburn would like to wipe the night full of lowlight memories from their heads, that’s not the way season-ending defeats work.

These types of losses frustrate, linger and fester. But eventually the mental wounds begin to heal, and when that happens they can fuel players, too. For all the pain and disappointment that dominated the Jayhawks’ thoughts inside Vivint Smart Home Arena, first as Auburn ran away to advance to the Sweet 16, then in the locker room when the season’s finality hit the team’s leaders with an emotional knockout punch, their psyches will recover in the days ahead.

For the KU players who are both driven and plan on returning for another postseason run in 2020, this 14-point loss to Auburn in a game that felt like a 30-point Tigers lead much of the night has the potential to be a launching pad for an offseason of growth and improvement.

That’s really the only good thing about such brutal losses. Even when the sting downgrades from a 10 to more manageable level, it won’t go away for competitors. And because it will always be there for certain players, they’ll be reminding themselves the entire offseason that they need to push themselves harder in order to make sure this brand of heartache that they confronted in Slat Lake City doesn’t devastate them again.

Five-star prospects don’t sign with Kansas to lose in the tournament’s first weekend. This wasn’t what Devon Dotson envisioned for his first taste of March Madness. And when he couldn’t will the Jayhawks to some semblance of a rally versus Auburn, it crushed him.

The toll of goals unrealized first weighed on KU’s freshman point guard late in the inevitable defeat, as he sat on the bench and did his best to fight off tears — covering his mouth with a towel, attempting mask the raw emotions of the moment.

But Dotson couldn’t escape those feelings by leaving the floor after the final buzzer. They hovered over him in the postgame locker room, too. Upon taking his seat, Dotson slumped over. A towel soon draped over his head, as he powered through answers to reporters’ questions, pausing on several occasions to find some composure when the tears wouldn’t stop falling form his eyes.

“We’re all brothers. This team has an unbelievable bond,” Dotson said regarding the visibly shaken look the Jayhawks wore in the aftermath of the defeat. “We’d do anything for each other. At the end of the day, we just wanted to play for each other. It just hurts.”

Dotson must’ve uttered some variation of that last word at least a dozen times during postgame interviews, repeatedly shaking his head in disbelief, covering his face with his hand at times, and his eyes downcast most of the session.

While the future of his teammate Dedric Lawson is unknown at this juncture — Bill Self said after KU’s loss to Auburn that Lawson and others will have decisions to make regarding their chances of going pro — Lawson summed up the mood inside the locker room perfectly, describing the NCAA Tournament as something he and his teammates grew up dreaming about.

“And it went away so quick,” Lawson said.

The Auburn Tigers know that feeling. In 2018, their dreams of a March run were dashed by Clemson in the second round with a 31-point loss.

A year later, they were the experienced team crushing a second-round foe for a berth in the Sweet 16. The Tigers looked not only fast, but also experienced, as they buried the Jayhawks in the first half.

For Dotson and other members of the KU rotation who return, this dismantling at the hands of Auburn, impossible as it may have seemed while they endured it, could end up becoming a driving force within the team’s DNA when the Jayhawks try to redeem themselves in the 2020 tournament.

“It’ll definitely be beneficial,” Dotson said of the admittedly upsetting circumstances. “You know, us growing as a team and taking that next leap next year.”

While Dedric Lawson and his brother, K.J., and Quentin Grimes didn’t want to get into on Saturday whether they will be back for another go-round at The Big Dance, it doesn’t look like Dotson is going anywhere.

“I’m just heartbroken from this loss,” Dotson said, when asked what’s next for him, quickly adding he would turn his focus to the offseason and “getting better.”

If Dedric Lawson were to leave to pursue a professional career, this would immediately become Dotson’s team. Regardless of the pecking order, the point guard already is a program leader, and he’ll continue to grow in that role in the months between now and the start of his sophomore season.

Dotson is the most competitive player on KU’s roster. And now that he’s felt what an early exit from the NCAA Tournament is like, he’s not the type of athlete to let it happen again. If he has to become the lead guard who carries the Jayhawks he’ll do it. If he has to motivate his teammates as they work together toward something greater, he’ll do that, too.

The Jayhawks won’t ignore or forget their March shortcomings anytime soon. And if they try to, Dotson will be there to remind them that’s not an option.

We should notice Iowa came back from 25 to tie Tennessee yesterday, though losing in OT. Just couldn't get a stop.

I've seen no Jayhawks on any mock draft this year. Yes I know that they don't want to make decisions...but Dedric is the only one I see with a real shot of being drafted. Silvio & Dok haven't played, Q isn't ready, and the idea of KJ leaving early doesn't make sense either. I really don't know what goes into the calculus unless somehow playing in the D-league or Europe is their endgame.

And I keep checking on to see where Billy is playing, every time I check it's somewhere new, must be a half dozen teams by now in less than 18 months. Last I see he's w/the Texas Legends G-league, but did not play in their last game.

"These types of losses frustrate, linger and fester. But eventually the mental wounds begin to heal, and when that happens they can fuel players, too."

Do they though? We had no less than 5 of these types of blowout losses to inferior teams this season, and not once did we see any sort of ability to learn from them. Huge games with the streak on the line and they just collapsed over and over.

The icing on that cake was when we were finally mathematically eliminated from continuing the streak and the players literally said it wasn't even something they thought about.

This team is just weak and lacking any sort of pride. Shots not falling? Just give up, over and over. The crowd against you? Fold like a cheap suit.

The players didn't care and it showed.

I've been watching KU basketball for decades now and this was easily the softest mentally...and the scary thing is that we don't have any decent talent lined up to replace them for next year.

.I'm not quite as pessimistic or jaded as you seem to be but that doesn't mean you're wrong. I have rarely seen the ending of one season, in college sports, affect the play of the next season.

No reason for Dok or Dedric to return. It would be great for the Jayhawks who don't seem to be in the running for any of the top bigs in next year's draft but it would gain then nothing.

What more can they show the NBA? Dedric; very skilled, understands basketball, not overly athletic or fast but plays inside his game. He will still get drafted in the second round if he stays or maybe injures himself and his out of the game permanently. Definitely the same for Dok who doesn't seem capable of getting dressed without injuring something.

Coach Self himself said he thought this team underachieved a bit. We knew a couple of weeks after Dok was out for the season that the team had problems, and was not going to win a national championship anymore...I was ready for this. Strangely, this might be the least bothersome NCAA loss, at least for me, that I've experienced since I graduated a long time ago.

I think I've been around long enough to know that this season ending loss will have little or no impact on next years team. It sounds stupid to say that maybe this is as far as Self can take us.

This wasn't Coach Self's best or worst coaching job. He's done better with less talented players and he has overcome distraction after distraction this season to keep our 20 game win streak, our streak of consecutive NCAA tournaments and had things gone differently and the final version of the team had more time to gel then maybe we make it to the Sweet 16. But that was it.

In any category other than NCs, Self has been at the top since he has come to Kansas. I completely believed that Self was going to run off two or three NCAA titles. I think Obama take us to win on three separate occasions. We have been the overall ##1seed on several occasions.

It is not the losses that bother me but the way we lost. We were run out of the gym at ISU, Tech, K-State, Texas, Auburn, OU. KU doesn't do that. The pride was not here this year. When I played if a guy was beating you, he got a bruise. If the other team won, they paid for it in blood sweat and.. tears.