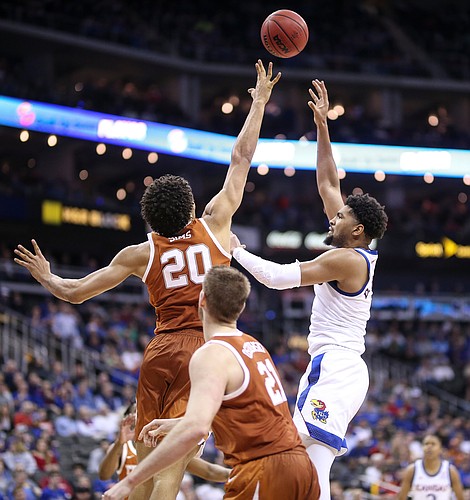 Kansas forward Dedric Lawson (1) turns around for a shot over Texas forward Jericho Sims (20) during the second half, Thursday, March 14, 2019 at Sprint Center in Kansas City, Mo. by Nick Krug

A native of Memphis, Tenn., and, of course, a former Memphis Tiger himself, it came as no surprise that his hometown college basketball program left quite an impression on him as a child.

Though Lawson said he didn’t run around Memphis as a youngster wearing a Derrick Rose or Chris Douglas-Roberts jersey, those were his two favorite players when he first started following the game closely.

The Memphis basketball program really began to take off under then-head coach John Calipari when Lawson was in elementary school, and Lawson found himself drawn most to Douglas-Roberts, a versatile small forward not too dissimilar from the player Lawson would grow to become.

“He was more of like a 3,” Lawson said of why as a child he chose the 6-foot-7 Douglas-Roberts as his favorite player instead of the explosive point guard, Rose. “I met those guys when they were at Memphis. We used to go around the program and things like that. They was real cool. Robert Dozier (a Tigers big man), he was real, real cool, too.”

Years later, when Lawson was a member of the Memphis program, playing his first season under coach Josh Pastner and his second for Tubby Smith, some of those Tigers he grew up admiring would come back around.

“We played pickup together and things like that. Those were cool people,” Lawson said.

And with Memphis basketball so much a part of his DNA, Lawson couldn’t help but laugh about the fact that his favorite childhood team lost to Kansas in the 2008 national championship game.

Lawson was 10 years old when the man who is now his head coach, Bill Self, guided the Jayhawks to an overtime victory against Calipari and Memphis.

Was he bitter at the time?

“I definitely was,” a smiling Lawson admitted, adding he remembers it like it was yesterday. 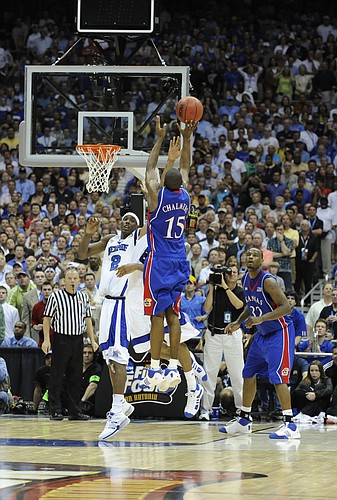 Kansas guard Mario Chalmers elevates for the three-pointer that put the game into overtime. Chalmers connected with 2.1 seconds left to tie it at 63, and the Jayhawks went on to win, 75-68 in overtime, April 7, 2008, in San Antonio. by Nick Krug

Perhaps unfortunately for Lawson and those old March Madness scars from his time as a fan, he gets a reminder of that pain before every KU home game, when the hype video plays a clip of Mario Chalmers’ iconic 3-pointer that sent the 2008 title game to OT.

“I’m cool with it now,” a laughing Lawson shared. “I’m a part of both cultures. There’s not really too much bitterness no more. And Mario, he’s a cool guy, as well. It was great for Mario. It was something great that happened for him, something sad that happened for Memphis.”

Of course, Lawson and the Jayhawks aim to create their own March Madness memories this weekend and beyond. And right now, their focus is on Friday night’s semifinal at Sprint Center, where they will meet up with an unlikely foe, No. 10 seed West Virginia.

Lawson couldn’t have imagined before the Big 12 tournament began that KU would be facing the Mountaineers.

“Nah. We was definitely expecting Tech,” Lawson said. “Of course, everybody probably was. Just to kind of play them again — we lost to them by like 20 — so we wanted to play against them guys again,” he added, referencing KU’s 91-62 loss at Texas Tech on Feb. 23.

“But it’ll definitely be a competitive game,” Lawson said of facing a WVU team that upset Kansas in Morgantown, W.Va., back in January. “They’re not gonna quit. They’re gonna come out playing with a lot of intensity and very hard.”

Glad to have Derrick making contributions to the KU BB program now, but from his quotes in the article above, he needs to log a few more hours in English Conversation Class. Hope to see him back on the team next year.

Maybe you can join him in a proofreading and editing class while you're at. You meant to say Dedric.

Best way to erase the painful memories is to create positive ones. Let's hope for a bunch (8?) more in the next month or so.