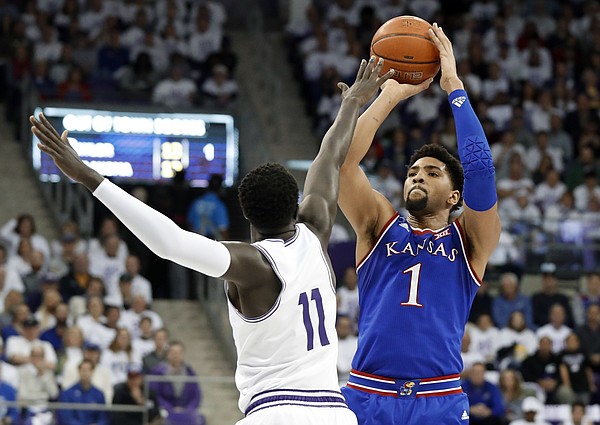 There are far easier paths to an NBA career than the one Dedric Lawson must now traverse.

No one expected the offensively gifted forward who spent his redshirt junior season at Kansas leading the Big 12 in scoring and rebounding to become a lottery pick or first round pick in Thursday night’s draft. Most experts didn’t even project Lawson as a second round pick, and they were proven correct.

The undrafted Lawson at least has a shot, though, thanks to the Golden State Warriors offering him a spot on their summer league roster. And if he’s going to prove himself deserving of a regular season spot with the defending Western Conference champs or one of the league’s other 29 teams, it will likely be Lawson’s jump shot that determines his staying power.

He may be 6-foot-8.5 in shoes and weigh 233 pounds, but Lawson isn’t going to suddenly become an elite finisher at the rim or a sturdy defender of the paint. His successes, whether great or few in number, will come when he has the ball in his hands outside of the post.

Lawson proved to be a reliable 3-point shooter as a big during his one season playing for the Jayhawks, knocking down 39.3% from outside (35 for 89 in 36 games).

And, believe it or not, that particular skill actually is one that Golden State could use some more of next season. Even though the greatest shooter of all time, Steph Curry, will still be around, Kevin Durant is widely expected to bolt in free agency, and even if Durant were to re-sign with the Warriors his ruptured right Achilles’ tendon will most likely sideline him for all of the 2019-20 schedule. Then there’s the matter of sharpshooter Klay Thompson. Curry’s Splash Brother tore an ACL in the Warriors’ Game 6 loss to Toronto in the NBA Finals. Most expect Golden State to re-sign Thompson, who is a free agent, but his knee injury will force him to miss most if not all of next season, as well.

In that regard, it’s not completely absurd to talk yourself into a scenario in which Lawson excels offensively this summer, gets a training camp invite as a result and ultimately becomes a reserve forward worth keeping around on the cheap.

However, it will take Lawson looking proficient and maybe even playing above his head to make that a reality. Though the only players currently under contract with the Warriors for next season are Curry, Draymond Green, Andre Iguodala, Jacob Evans, Damian Jones, Shaun Livingston and Alfonzo McKinnie — and the contracts of Livingston and McKinnie aren’t guaranteed — there are incoming rookies who soon will join that list, and Lawson will have to either outperform them or prove he meshes well with them.

Golden State drafted shooting guard Jordan Poole late in the first round, but both of the organization’s second round choices qualify as competition for Lawson, because they are forwards and will be given a priority over a summer league roster player.

Alen Smailagic, the No. 39 pick in the draft, is a player in whom the Warriors truly are invested. A 6-10 big known for his pick-and-pop ability as well as slashing, Smailagic spent this past year playing for Golden State’s G League team, Santa Cruz.

Two picks later, Golden State snatched up another forward, 6-6 Eric Paschall, from Villanova. The hard-nosed Paschall is tough enough to defend inside even though he is undersized, and he shot 34.8% from 3-point range as a college senior.

Lawson’s chances to stick with the Warriors would seem far more feasible if Smailagic and Paschall weren’t in the mix. We don’t yet know what other forwards Golden State may add this offseason, and there already are four ahead of Lawson in the pecking order, with Green, Iguodala and the two rookies, not to mention McKinnie, if he’s back.

The good news for Lawson, though, is that he has the flexibility to end up with another franchise if he plays to his strengths with the Warriors’ summer league team. He may lack the athleticism and explosiveness of other rookies, but the 21-year-old prospect understands the game. If Lawson fits in well offensively with his summer teammates as a shooter and ball mover — and don’t forget that he can be an effective rebounder, too — that could be enough to impress other team’s scouts and coaches.

Organizations looking to spend big this summer in free agency will have to fill out their rosters with inexpensive players. And if a maxed out team ends up needing a big who can shoot and pass, that would be an ideal landing spot for the forward from Memphis with an enviable basketball IQ.

Lawson will play overseas and make a good living.

It’s a shame that Dedric didn’t do more with his body in 2 years with Hudy, though he did really step up his outside game between the 1st and 2nd halves of the season. IIRC, teams figured out by the end of the year that they could take him out of his comfort zone by being physical with him. I wouldn’t count him out but it’s more than just the other players on his team that will be a challenge for him making a team.

Are you insinuating that he didn't work hard on his body? There used to be a before/after picture of him with his shirt off on his social media. It was a drastic change and his bodyfat % at the draft combine his two times showed a good change as well.

Unfortunately for him, he's not a fast twitch guy so no matter how hard he works he'll never be an explosive, high jumping, fast running athlete. Same goes for being built like a tank, it's just not going to happen. He's naturally a long and slim guy and while he's probably 30lbs heavier than he'd naturally be, that just took him from skinny to average.

The Warriors have a bunch of open roster spots. Even if they re-sign with GS, neither Klay Thompson nor Kevin Durant will be on the active roster after suffering major injuries in the NBA Finals. Shaun Livingston is reportedly retiring. DeMarcus Cousins, Andrew Bogut, Kevon Looney & Jordan Bell all had expring contracts, and of those 4, Looney is the only one I see the Warriors definietly re-signing. Bogut may go back to Australia again or just retire. Bell was bad this past season and fell out of favor with Kerr. And Cousins may go looking for a bigger contract.

So there should be the opportunity for Lawson to earn a roster spot. Not to mention, they could always sign him to a 2-way deal.

BTW, did Vick sign with anyone? Even for a Summer League deal?