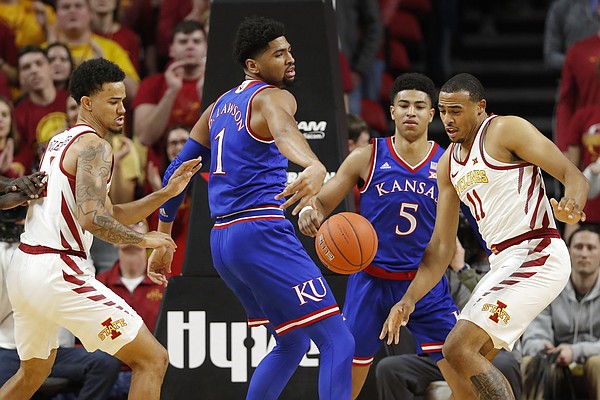 KU turned the ball over on 7 of its first 15 possessions but avoided that turning into a disaster early on, somehow, though it would catch up with them. Lagerald Vick, Devon Dotson and Dedric Lawson all had committed multiple turnovers by the 10-minute mark of the first half.

Even though the Jayhawks didn’t exactly clean things up from there, turning the ball over 14 times before intermission (on 40% of their 35 possessions), they only trailed 36-32 at halftime.

The offense in the first half of their first Big 12 road game never qualified as pretty, with hustle baskets by Quentin Grimes and a couple Lagerald Vick 3-pointers standing out as the few highlights.

KU’s season-high 24 turnovers and inability to either get Dedric Lawson going or find some 3-point shooting killed the Jayhawks’ chances.

With KU routinely coughing the ball up on the other end of the floor, the defense at least kept ISU from running away in the first half.

The Jayhawks’ domination on the glass played a factor defensively, too. ISU wasn’t finding any second chances on offense for the first 18 minutes of the game. The Cyclones, who were outrebounded 23-9 in the first half, scored their first second-chance basket 40 seconds before intermission.

ISU led by as many as 8 in the opening minutes of the second half, once the Cyclones started knocking down some 3-pointers. Iowa State drained its first four attempts from downtown after intermission.

With 7-footer Udoka Azubuike sidelined as a precaution after the junior center hurt his right wrist during Friday’s practice, the frontcourt was all Lawson’s at ISU.

However, the junior from Memphis didn’t come out and take over as one would expect of the team’s best player in that situation. Lawson scored only 3 points in the first half, shooting 1 for 5 in 16 minutes, despite quality looks.

Lawson needed to seek out stretches to take over and never found a way to make it happen. The redshirt junior forward finished with 13 points and 12 rebounds.

A freshman who took a while to get rolling in nonconference play, Grimes often looked like KU’s best player on Saturday afternoon. Grimes accounted for 11 of KU’s 32 first-half points, often by out effort-ing the man in front of him or near him.

Grimes finished with 19 points on 7-for-14 shooting and grabbed 6 rebounds.

Senior Lagerald Vick, meanwhile, too often played sped up or tried forcing the issue. Vick had seven turnovers on the day with more than 15 minutes left in the game.

Vick contributed just 6 points and, per ISU’s stat feed, finished with a plus/minus of -18, to go with his 7 turnovers.

Not quite as effective offensively at ISU as he has shown he can be over the course of the season, freshman point guard Devon Dotson proved he will compete regardless of how his day is going individually.

Dotson chipped in 7 rebounds, 3 assists and 2 steals to go with his 8 points.

A fill-in starter with Azubuike out, Marcus Garrett, uncharacteristically, didn’t create much for Kansas as a passer. Likewise, the sophomore guard got beat on defense in a couple of instances by losing focus for a second or two, which you rarely see from Garrett. He scored a quiet 8 points and added 4 rebounds.

Given the venue and KU’s ball security troubles, the visitors actually needed some kind of spark from its substitutes at ISU — especially with its typical sixth man, Garrett, inserted in the starting lineup for Azubuike.

Bill Self rarely turned to his bench, though, and sixth man for the day Charlie Moore struggled, going 1 for 5. With Wigginton (8 points) doing most of the damage, the ISU bench outscored KU’s 14-6.

On TV, the commentators said that the Cyclones "sped" up the KU offense. This has been happening all season, not due to the opponents defense but moreso due to bad decisions and our inability to run an effective offense that yields favorable results.

You're so right, Clarence. No doubt that the Cyclones were playing at a high speed, but a huge number of our turnovers were due to just plain sloppiness, which has been happening a lot.

You'd think at some point they'd start to realize that they don't always have to try for the spectacular play, but it doesn't seem to be sinking in yet.

I'd say, it's time for a townhall meeting. Let's demand our coaches to meet fans. Q&A. Have we ever done that?

No excuse for so many turnovers.

And Vick was killing us.

F-minuses across the board. It takes a special breed of slug to get your ass kicked that badly by freaking Iowa State.

What a hat trick. The three things that have plagued this team the most all showed up in one spectacular train wreck. Perimeter shooting, free throws and turnovers.

The Cyclones just sent a message to the rest of the conference. KU can be beat. For that matter so did Oklahoma.

I have been saying all year our guard play has been poor, the passing, the shooting, turnovers. I thought Grimes and Dotson did okay. I would have pulled Vick and sat him down and played Moore yeah he did not shoot the ball well but he had 0 turnovers. Vick killed us. I think we need 2 bigs on the floor at all times because are guard play is so bad. This might be the year the streak ends. Is Iowa State better than Tech, TCU, Texas? I think we might have 3 more road losses and maybe 1 or 2 home losses unless we figure our how to make free throws how to stop turning the ball over how to execute the offense. Maybe we recruited the wrong kind of players. I like Grimes and Dotson, Vick not so much, we need another guard who can handle pressure and shoot.