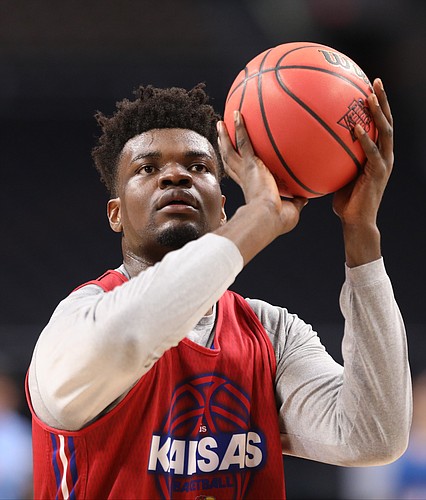 Kansas center Udoka Azubuike puts up a shot on Friday, March 30, 2018 at the Alamodome in San Antonio, Texas. by Nick Krug

Udoka Azubuike, considered a notorious misser of free throws by some, has not lost the trust of his Kansas basketball teammates when he steps to the foul line.

How could that be, with the burly center connecting on a lowly 34.4 percent of his freebies so far this season?

The man who starts next to Azubuike in KU’s frontcourt, Dedric Lawson, explained following KU’s victory over No. 23 Oklahoma that the 7-footer, as you so often hear about players who struggle at the free throw line, actually performs more than acceptably there during practice situations.

When asked if he was concerned about Azubuike as a shooter when the Sooners opted to foul the big man and put him on the so-called charity stripe with 4:32 left in the second half, Lawson balked at the notion.

“To be honest I wasn’t, because at practice coach did like a drill with Dok,” Lawson related of Bill Self’s instructions for the center earlier in the week. “He had to make 37 out of 50 free throws. And Dok did it the first time. If he didn’t do it, he would have to stay in the gym ’til he finished. So I thought he was going to be pretty comfortable at the free throw line tonight.”

According to Lawson, who witnessed the exchange between KU’s center and coach after Azubuike completed the exercise, Self asked the big man why he didn’t make 40.

“Because you said 37,” Lawson shared of Azubuike’s answer.

Even though the junior center’s free throws didn’t play much of a factor in KU’s 70-63 victory over OU (Azubuike only attempted one free throw the entire game, and missed it), the late-game sequence could foreshadow what awaits No. 5 KU and its least sound free throw shooter in the weeks ahead.

Self said when his OU counterpart, Lon Kruger, decided to send Azubuike to the foul line, it only surprised the KU coach that it happened at that particular juncture, with more than for minutes left.

“It’s kind of a screwy deal, and it’s really not fair to Dok. But we probably should’ve played him before we were in the bonus, so that way they wouldn’t have done it, and then when we got in the bonus if you want to rest him, then rest him then,” Self said of a substitution pattern that could have avoided that situation.

Once Azubuike missed the front end of his one-and-one, Self didn’t immediately yank him from the floor. But senior guard Lagerald Vick replaced the center at the 3:47 mark, and Azubuike watched the rest of the game from the bench, as KU closed out its Big 12 opener with a victory.

“I wasn’t gonna take him out after one miss. But when it got down under the four minute timeout, I thought it was time that we should probably go ahead and sub for him,” Self said, “because I knew they were gonna do it again and we were still in the one-and-one — we weren’t in the double bonus yet.”

Based on last year’s results alone, Kruger, a respected tactician, seems to be the only Big 12 coach willing to fully embrace the hack-a-Dok strategy. While other coaches tried it a year ago, it was sporadic at best, compared to Kruger’s commitment to it in crunch time at Oklahoma in late January of 2018, when six consecutive missed Azubuike free throws in the final minutes led to a Sooners victory.

Perhaps Kruger’s colleagues around the conference will come to agree with his line of thinking in league play in 2019. We’ll soon find out.

When/if KU encounters another hack-a-Dok situation, it seems safe to assume Self will try to counter it, in part, by resting Azubuike while KU is in the bonus, if possible.

Don’t be surprised, though, if Self at least gives Azubuike (11 of 32 on free throws this season) a chance to hit some late-game free throws in a relatively tight game soon. Free throws often come down to a player’s comfort at the foul line. Self won’t want to make his center overthink them even more by just not playing the 7-footer at all in crunch time. Now, if it’s a one-possession game in the final minute, that situation may force Self to play the percentages, and take his career 39.4 percent foul shooter out of the mix.

But there is something to be said for giving Azubuike some chances late in games to at least attempt a free throw or two. If he misses a couple, Self can go ahead and sub him out. If the center makes them, there’s no reason to take him off the floor when he can help you on the glass and protect the paint, as well. Plus, showing some trust in the big man can only help his confidence moving forward.

I expect Dok to be a double-double just like DSmooth. Dok hasn't been a force inside like Lucas. Dok hasn't really established a presence inside where he causes shots alteration. He needs to have his presence felt there. He needs to protect our basket more. One good thing we see him improved in defense is he doesn't commit fouls as much as last season, while blocking more shots.

Look at the photo. The ball should be on the right side of his head, so his arm is vertical from the elbow through the hand. I don't understand why the coaches have allowed such a variance from fundamental form for such a poor shooter.

I also wonder whether the green light on treys will be turned off for D Lawson and M Garrett at some point. 17% in half a season is more than a trend, unless they're showing something better in practice that just hasn't translated to the games yet.

Grimes, Dotson, Moore all have good strokes so they are beginning to complement Vick from the outside. RCJH!

I agree with you on Dok's free throw form and thought they would overhaul his form this last off season. It seemed to me that one of our posters offered the right solution...make him practice using only his right hand. That would force him to correct the flaw you mentioned.

Dok's game hasn't progressed nearly as much as I had hoped. I doubted we would see him here for his third year but right now, he's not even a second round pick.

Sometimes I think it's too quiet in AFH when he's at the line. Seems like it accentuates the intensity.

I've beaten this into the ground, but as long as Dok's FT shooting keeps getting worse and worse, I'll keep mentioning it: I hope that at some point, SOMEONE will have the nerve to try Rick Barry's underhand style. I mean seriously, Dok is shooting UNDER 40%!!! At what point is it worth at least TRYING the other style??? Can it really be any WORSE???

And the chances are that it will be better, and maybe even significantly better. It's a much simpler way to shoot the ball, and maybe the simplicity could really help Dok in pressure situations. What does he have to lose???