KU bigs Lawson and Azubuike more than capable of playing together 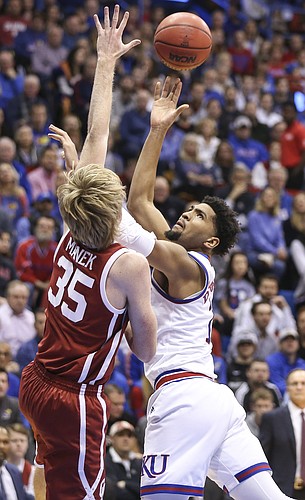 Thirteen games into the season the Kansas basketball team still hasn’t come close to reaching its ceiling, particularly on offense.

The latest evidence of how much better the No. 5 Jayhawks (12-1) could become over the course of the next couple of months materialized during the second half of their Big 12 opener versus No. 23 Oklahoma.

KU’s two most effective offensive players, center Udoka Azubuike and forward Dedric Lawson, didn’t live up to that billing after halftime and the offense flatlined as a result.

“When Dok and Dedric both were in the game, neither one was scoring in the second half,” head coach Bill Self lamented after his team’s 70-63 victory.

While Self attributed some of Azubuike’s issues to conditioning, what with the 7-footer playing in just his second game since missing close to four weeks with a right ankle sprain, Lawson, particularly early in the second half, seemed to be adjusting to playing alongside the massive post player again.

“If we were going to play them both together, we should’ve thrown it inside every possession, and we didn’t do that or take advantage of that,” Self said.

After an eight-point first half, Azubuike went scoreless — and didn’t even attempt a shot from the floor — in nine second-half minutes. Lawson played all 20 minutes in the second half, but clearly was at his most impactful when KU’s starting center sat.

Within a minute of Azubuike subbing out, Lawson, who is averaging 10.5 points in KU’s two games since the 7-footer rejoined the lineup, scored a layup off a Quentin Grimes assist. That ignited a burst during which the redshirt junior forward from Memphis scored six of KU’s eight points in two minutes, pushing the Jayhawks’ lead from five to 13 in the process.

“And then after Dedric made those three baskets in a row he took about three or four bad shots in a row, or marginal shots I should say,” Self added, “which were times that we probably should’ve been more patient and made sure we got a paint touch.”

Following KU’s win, Self didn’t seem too worried about the duo’s ability to play together, however. Asked about how Lawson could get post-up opportunities when Azubuike, who scores basically all of his baskets from within a few feet from the rim, is in the game, Self pointed to the missed opportunities from Lawson in the first half as proof they can both get the touches they need.

“He got a few and didn’t take advantage of them,” Self said of Lawson missing his first seven shot attempts in the first half, with three of those misfires coming at the rim and two more attempted inside the paint. “Dedric probably missed (as many) easy shots in the first half as you can miss. The first possession of the game he gets a two-footer and he missed about three or four layups when (Brady) Manek was guarding him — of course, Manek’s length does bother him. But I didn’t think that was a problem as much tonight.”

Lawson finished 6 for 17 from the field, 0 for 3 on 3-pointers and with 13 points and 15 rebounds in KU’s conference opener. Azubuike went 4 for 5, with eight points and nine rebounds. 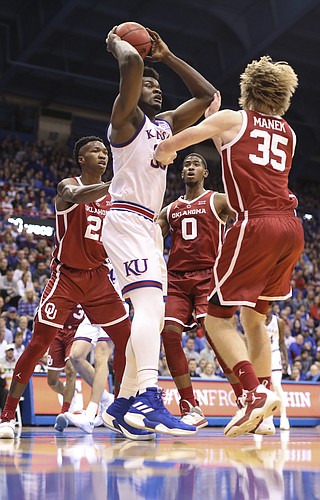 Kansas center Udoka Azubuike (35) looks to throw a pass against several Oklahoma defenders during the first half, Wednesday, Jan. 2, 2019 at Allen Fieldhouse. by Nick Krug

It wasn’t as if this was their first time sharing the court this season, but it was just their second game working in tandem since Azubuike’s return, and the Sooners’ defense provided a much more imposing challenge than what Eastern Michigan could offer.

There’s still a bit of a feeling out process going on for Azubuike and Lawson. And that’s OK. KU still has more than two weeks of practices to go before the start of the spring semester. Much progress can be made with the fluidity of a two-big offense in that time, especially with Lawson doubling as a superb entry passer for Azubuike, who can dominate around the rim.

“I still think that’s the best way for us to play, to get our best offensive team on the court,” Self added of playing his top two bigs together. “But certainly we were better the second half when Dok was out of the game offensively, because if Dok’s not scoring then he kind of guards Dedric.”

The spacing needed for both to thrive, of course, would come if Kansas could discover some semblance of consistency from its 3-point shooters (34.4 percent on the season and below that mark as a team in six of the previous seven games).

“It’s very important,” Lawson said of the Jayhawks finding their marks from long range. “The paint was crowded tonight and I think teams are going to start crowding it up and loading it up on me and Udoka to make it harder on me and Udoka to score easy and to get those easy baskets. So to free that up guys got to make shots.”

It's hard to believe we are still playing stagnant offense up to this very day. Sure both Dok & DSmooth are more than capable playing together, but just how effective would that be?

Take a look at our TOs, take a seriously look at them. Look at our assists. Good luck staying with high-low the rest of the season.

Our perimeter shooting is what it is. I don't see that improving, if anything it might get worse now that we are in conference play. Bill has to find a way to get Dedric and Udoka in the game at the same time. Otherwise we are looking at a sweet 16 team at best come March. Sacrifice some conference games to find the right chemistry if necessary.