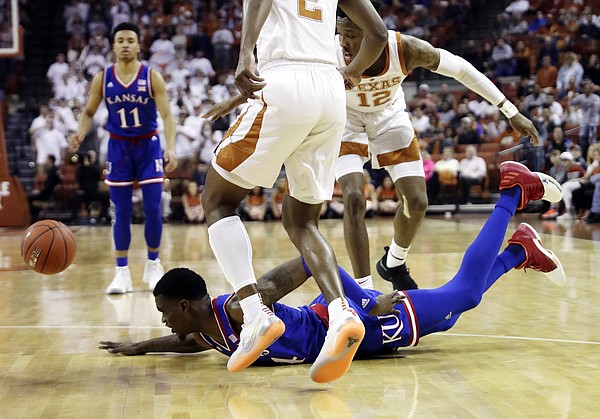 Kansas guard Lagerald Vick (24) falls to the floor past Texas guard Kerwin Roach II (12) and guard Matt Coleman III (2) as he loses control of the ball during the first half on an NCAA college basketball game in Austin, Texas, Tuesday, Jan. 29, 2019. (AP Photo/Eric Gay) by Associated Press

The Jayhawks couldn’t have experienced much more of a nightmarish start to their evening offensively. Between their 8 first-half turnovers and the majority of the starting lineup missing shot after shot, KU only scored 23 points before halftime.

The break for intermission didn’t do much good for the effectiveness or visual appeal of KU’s offense, though.

The Jayhawks spent much of the second half continuing to look lost offensively, and they didn’t achieve 40 points on the scoreboard until 7:31 remained to play.

UT’s preferred slow pace muddied the Kansas offense, for sure, and with a lack of flow, the Jayhawks shot 43 percent from the field on the night, and turned the ball over 13 times.

Poor perimeter defense early on against the Longhorns allowed UT guard Kerwin Roach, the team’s leading scorer, to knock down a couple of 3-pointers for a 12-5 Texas lead in what was a stagnant start for both teams, really.

Fortunately for Kansas, the Longhorns spent most of the first half misfiring (9 of 27 overall, 5 of 16 on 3-pointers). Some of those were the result of solid KU defense. Other times Texas just missed. But the Jayhawks at least were able to survive the first half, and head to the locker room down 26-23 because of what they accomplished on that end of the floor.

In the second half, Texas certainly wasn’t great offensively. But KU’s biggest issues came inside, where Dylan Osetkowski (16 points) made a habit of drawing fouls and scoring in the paint.

The Longhorns hit 55 percent of their shots in the second half.

Dedric Lawson (13 points, 7 rebounds): The focal point of every opponent’s defensive game plan, Lawson often found himself surrounded and/or pushed out of the paint. And if he wanted to face up and drive, Texas typically had help leaning his direction to clog the paint before he could get there.

As a result, Lawson had one of his most challenging nights of the season, shooting 4 for 15.

Devon Dotson (9 points, 4 assists): The freshman point guard opened the game by pushing the ball up the floor for a fast-break layup. He had a shot at another layup in transition two possessions later, which he missed, but it showed some promise that Dotson would be able to attack and provide KU some extra offense on the road.

However, such opportunities didn’t present themselves again in the first half, as the Kansas offense struggled. And Dotson was unable to find too many ways to make an impact in the second half, too.

Marcus Garrett (2 points, 5 rebounds): Garrett’s first drive from the perimeter to the paint ended similarly to his interior encounters with Kentucky this past weekend, with his shot getting rejected by UT big Jaxson Hayes.

With KU’s offense playing pitifully late in the first half, Garrett got KU a bucket by running the floor in transition and scoring on an offensive rebound, but that only trimmed the UT lead to 23-14.

Other than his typical defense and some rebounding, Garrett didn’t play much of a factor.

Quentin Grimes (3 points): Coming off a rare double-figure scoring outing at Kentucky in a loss three days earlier, Grimes came out ready to catch and shoot in the opening minutes at UT and drained a 3 from the left corner.

However, that was one of the rare junctures of the game when Grimes looked comfortable with the ball in his hands.

Ochai Agbaji (24 points, 7 rebounds): It took more than half of the opening half for the freshman guard to settle in during his first career start. But Agbaji began playing more under control and with focused activity after taking a break on the bench.

Agbaji’s 9 first-half points easily led KU. And at times it seemed as if the freshman guard was the only player in a blue uniform who could score.

Lagerald Vick (10 points, 2 for 5 3-pointers): Twice in the first half, a KU possession ended with a shot clock violation and the ball in Vick’s hands.

KU’s best 3-point shooter didn’t find an attempt from downtown until less than 12 minutes remained, and Vick hit it, making KU 4 of 10 from deep at that point.

David McCormack (2 points): The KU offense was stalling out when McCormack cut to the paint and caught a pass from Vick for a layup to make UT’s lead to 14-8. It was a rare bright spot, and the freshman big didn’t play much.

Mitch Lightfoot (0 points, 0 rebounds): UT’s large frontcourt provided junior backup big Lightfoot some playing time (14 minutes), and he gave the type of effort you would expect, even if that didn’t result in much statistical production.

We look nothing like a conference champion right now. Hope we can turn it around.....soon.

Probably the most disappointing thing at this juncture, is we have simply not played well for a long period of time. The time comes when you realize it ain't gonna happen, and I'm afraid we are reaching it. West Virginia, Texas, we should have been able to win on the road. How will this team win at Texas Tech, or KState, or TCU, Or Ok St, or OU, frankly you have to wonder.

This team has no real rhythm, our offense is generating nothing. So let's look at it. So being critical, Dotson is a very fast guard, and able to get to the basket. he is strangely very low in assists, and does not seem to be able to break defense down. We need 10 pts, six assists every game.

Vick has got to go aggressively to the basket, and tighten up his defense. He is a liability.

Lawson good enough, but should not force 3s, he is probably the only player playing on the level that it takes to win no. 15.

Grimes, should take some charges, and drive to take the short 3 to 5 foot jumpshot. He can't just hang around on the outside waiting for a 3 pt shot.

Agbaji cut down on stupid turnovers, otherwise keep rebounding, keep playing hard. You have star written all over you,, and your energy and drive is the only good thing that makes me not loose hope altogether.

Garrett, should go both directions and not force 3s. This team should drive hard to the basket and shoot shorter jumpshots, when the shotblocker is too close, otherwise get fouled, We simply do not get to the line enough, and we are not that good when we do.

Might as well play DeSousa, the season is gone anyway. All they can do is make us lose games. Wake up the streak is over.