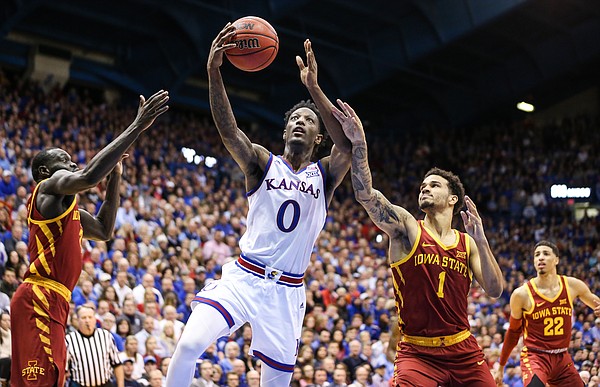 Kansas guard Marcus Garrett (0) gets in for a bucket between Iowa State guard Marial Shayok (3) and Iowa State guard Nick Weiler-Babb (1) during the second half, Monday, Jan. 21, 2019 at Allen Fieldhouse. by Nick Krug

Quick grades for five aspects of the Kansas basketball team’s 80-76 win over Iowa State on Big Monday at Allen Fieldhouse.

Kansas had one of its most lopsided games of the season in terms of scoring inside. Thanks in large part to a dominant night by junior big Dedric Lawson, the Jayhawks scored 46 points in the paint.

With so much of the team’s offense coming off of high-percentage looks, KU shot 51.6% from the floor overall, while sending in 6 of 14 from 3-point range.

One prominent knock against the offense: Kansas, as it has on several occasions this season, finished with more turnovers (11) than assists (10).

Maybe it was just that the Cyclones felt so comfortable taking 3-pointers (12 of 30) that they didn’t bother getting to the paint as much. But ISU only scored 26 points in the paint. The visitors shot 10 for 15 in the paint in the first half and 3 for 11 in the second.

You have to give the Jayhawks at least some credit for those 8 second-half misfires in the paint, right?

ISU shot 43.5% from the floor. That number would surely have been higher had the Jayhawks’ defense not improved in the second half, when the Cyclones shot 33.3% and scored 34 points.

Lawson played all but 2 minutes and was the primary reason KU got out of Big Monday with a win.

The junior’s 29 points and 15 rebounds (7 on offense) were too much for the Cyclones to handle. Wigginton Lawson even blocked a Lindell Wigginton dunk attempt in the game’s final minute, with KU leading by 3.

The invaluable Marcus Garrett again put up double-digit points (16) while chipping in 5 rebounds, 3 steals and the type of defense that helps KU survive in the Big 12.

Devon Dotson was as good as he’s been all season at attacking the paint and distributing (8 assists), even though many of his shots wouldn’t fall (3 for 12).

Lagerald Vick scored 12 of his 14 points in the second half, when he made both of his 3-point tries.

Quentin Grimes didn’t start the second half and only played 19 minutes, going scoreless (0 for 4) for the first time in his career.

The real Ochai Agbaji was back, as the freshman produced 8 points and 5 boards. But he fouled out in 16 minutes of action.

KJ Lawson provided some second-half energy, with his 3 rebounds and 2 points.

Revenge is a dish best served cold. Some observations: I think ISU is the better team last night they got out-coached in the second half. ISU led for most of the game and Garrett played an A+ game else we lose. Two players missing, Moore and Grimes, zero points and boards.