Jayhawks should learn from late-game missteps in win over Texas 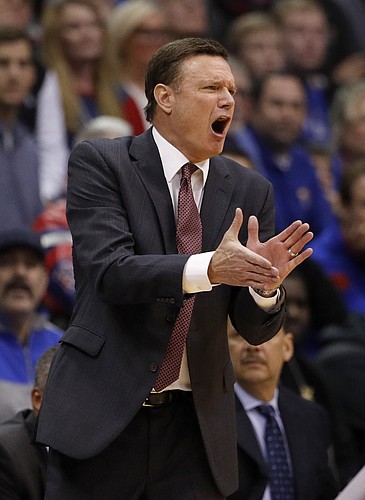 Kansas head coach Bill Self cheers on his team during the first half of an NCAA college basketball game against Texas Monday, Jan. 14, 2019, in Lawrence, Kan. (AP Photo/Charlie Riedel)

What was once a 10-point Kansas basketball lead shrunk to a single point Monday night when Texas guard Courtney Ramey drained an open transition 3-pointer with just nine seconds to go in the second half.

The Jayhawks knew what would come next — a Longhorns foul to stop the clock and send KU to the foul line. If Kansas couldn’t respond with two made free throws, UT could have a chance to tie or win the game before the buzzer sounded at Allen Fieldhouse.

Even though the Jayhawks survived for an 80-78 victory, what followed proved to be a valuable teaching moment for a team that’s relatively inexperienced in late-game, pressure situations.

Kansas coach Bill Self reminded Ochai Agbaji during a timeout at the 0:13 mark that the freshman guard needed to take the ball out if UT scored. Agbaji followed Self’s command after Ramey’s 3-pointer splashed the net and cut the home team’s lead to 79-78.

Ideally, Agbaji would have found KU’s best free-throw shooter, Devon Dotson (77.9%) in that situation. Instead, sophomore Marcus Garrett (61.2% at the foul line this season and 55% for his career) ended up taking the pass, which is exactly what the Longhorns wanted.

Garrett, though experiencing a career night offensively, was 0 for 2 at the charity stripe when he toed the line with 8.6 seconds remaining. To his credit, Garrett made the second of his potentially stressful attempts after missing his first, meaning UT would need a 3 to win instead of a 2.

Still, Self and his staff would have preferred to see the Jayhawks handle the sequence differently. And the lack of execution didn’t fall on the shoulders of Agbaji, playing in just his third college basketball game.

“We’d like to get the ball to Devon, but we didn’t do it,” Self said during his postgame press conference, when asked which Jayhawk he would want going to the free-throw line. “We’re not experienced enough to know with our guys. Ochai’s out there taking the ball inbounds and Devon’s a young guy. Obviously, in that situation you’ve got to get the ball inbounds. And I didn’t want to use our last timeout unless we had to.”

They may not have to worry about what to do with sub-40% free-throw shooter Udoka Azubuike in such situations anymore, but the Jayhawks do have to make sure they get the ball into the hands of the right player.

When Agbaji took the ball out of bounds, his possible targets were Garrett, Dotson (who was 3 for 4 at the foul line) and senior Lagerald Vick (who was 2 for 2 with 21 points). Dedric Lawson (who had made 3 of 4 freebies in the final 2:05 but missed one just before Ramey’s 3) headed toward the frontcourt, taking his defender with him and creating more space for KU’s guards to get open in the process.

Kerwin Roach stuck with Vick on the right side of the floor, Ramey did his best to deny Dotson on the left, closer to Agbaji, and UT defender Jase Febres allowed Garrett to flash toward the baseline and catch Agbaji’s pass so he could immediately foul a below-average free-throw shooter.

“Ochai’s gotta probably be smarter knowing who to get it to,” Self said. “But if (Garrett’s) the only guy open, that’s who you throw it to. I would put that on Devon and Lagerald for not working hard enough to get open as much as anything else.”

The No. 7 Jayhawks (15-2 overall, 4-1 Big 12) avoided a pitfall in crunch time. But just barely. Febres got off a 3 that would have won the game, had his shot fallen just before the buzzer.

You can bet the next time there are some must-have free throws in play, Agbaji or any other KU player making the inbounds pass will know where the ball needs to go. And either Dotson (a 77.9% shooter) or Lawson (74.5%) will likely be the Jayhawks making sure they get open.

IMHO - Shouldn't Garrett be the person assigned to throw the ball in, therefore forcing the opponent to foul someone else? And a good target for consideration would be Dedrick, who has the ability to pass over pressure and to make free throws if fouled. Another option is to sub in a better FT shooter, much as we did with Dok at times.

Pretty lazy play by Lagerald, back pedaling slowly when he should have been trying to get open. Why not have Marcus be the inbound guy?

So Self should have had Garrett, a 62.1% shooter, instead of Agbaji, a 50% shooter, throw it in? Plus, Garrett has much more experience under pressure than Agbaji in college basketball. I don't think so. Vick and Dotson are the ones who should have worked really hard at getting themselves open. The bottom line is, we are still working on coming together as a team. There were two freshmen (one just starting to get his feet wet in college basketball), one first year transfer, a sophomore, plus a senior on the floor at the time. Keeping Agbaji in shows that Self apparently has a lot of trust in him. They still have a lot of work to do to get it all together, but they are making strides forward. Hopefully they can get it together quickly enough to keep us in the conference race.

well, as Benton notes, this is certainly a teaching moment we can learn from. A bigger issue is the number of players on our team shooting free throws below 70%. I have always considered that the bare minimum and we have 6 of the 10 player above shooting below that. This is going to cost us just like it did Memphis when we took a national championship right out of their pocket in 2008. There must be a way to get all of these players, let alone Dok, make their FT's at a higher percentage.

Rebounding sucked for the game along with perimeter defense and free throw shooting. We were lucky this game. Maybe play two bigs, the Lawsons when things get tight.