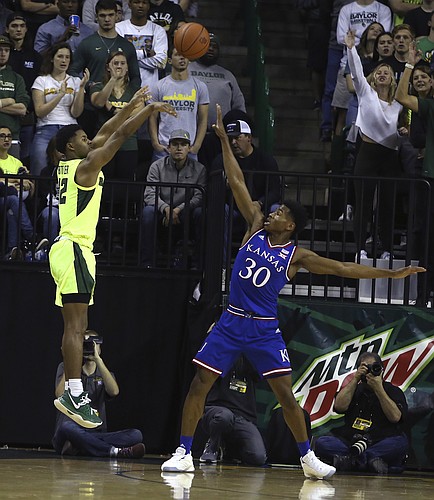 Waco, Texas — Quick grades for five aspects of the Kansas basketball team’s 73-68 win over Baylor on Saturday at Ferrell Center.

The Baylor defense, once it started sticking with its zone more consistently after rotating in some man-to-man in the opening minutes, was able to slow down the Jayhawks’ offensive flow in the first half.

An 18-2 Kansas lead in the first half didn’t stick, as the Jayhawks struggled for a stretch late, making only 1 of 7 shots from the floor and coughing the ball up four times during that same span.

Knocking down 5 of 10 3-pointers in the first half helped salvage the offense, particularly just ahead of halftime, when Lagerald Vick hit 2 and Ochai Agbagi made another from downtown. KU hit 48.1% of its first-half shots overall.

That recovery seemed to fuel the Jayhawks, and with Dedric Lawson and Vick providing most of the second-half offense, the Jayhawks began pulling away from the Bears.

KU had issues closing out what should have been an easy victory, though, allowing a 23-point lead with 6:28 left to shrink to 4 in the final minute.

BU struggled mightily for the first several minutes of the matinee, as the Jayhawks stayed active inside the paint and on the perimeter, repeatedly forcing the Bears into mistakes and/or bad shots.

Baylor missed its first 15 attempts of the game, with 6 of those misses going down as the result of KU blocked shots. BU turned the ball over 4 times before scoring its first basket, as well.

KU got out to an 18-2 lead before Mark Vital scored on an offensive rebound more than 10 minutes into the game.

The Bears recovered shortly after and finished the first half down 35-25, after shooting 32.1% from the floor prior to intermission.

Though Baylor entered the second half down 10, the home team struggled to find any consistent scoring sources against the Jayhawks.

KU finished with 11 blocks, 6 steals and held BU to 33.3% shooting, despite a rough couple of minutes to close it out, when the Jayhawks clearly took their foot off the gas, feeling overly confident that the game was over.

While all three of KU’s bigs played (even before halftime), it was Dedric Lawson, of course, who was asked to do the bulk of the work.

Sometimes the Bears bothered KU’s go-to scorer, but he didn’t let those instances get in his head. When he was able to carve out space and operate, Lawson looked as smooth as ever.

As usual, his presence and the attention he demands from defenders — particularly within a zone — benefited the Jayhawks around him.

Lawson (17 points, 3 rebounds) put forth a solid defensive outing, as well, showing progress on the interior. Lawson altered or got his hand on shots in the paint fairly routinely, keeping BU from taking control of the paint.

Coming off an 0-for-6 game versus TCU, Devon Dotson bounced back nicely. Dotson often was assertive with the ball in his hands when he spotted an angle that allowed him to speed past a BU defender. Dotson finished with 14 points and 5 assists.

Quentin Grimes (7 points) missed his first 4 shot attempts at BU, but even before he got one to fall he competed by diving on the floor for 50-50 balls and kept the ball moving versus the Bears’ zone defense in the half court.

KU’s ultra glue guy, Marcus Garrett (4 points) provided the perimeter defense the Jayhawks need from him, and grabbed 3 rebounds and dished 4 assists along the way.

Senior Lagerald Vick delivered one of his better shooting performances in a while, knocking in 6 of 8 3-pointers and scoring 18 points.

New sixth man Ochai Agbaji (10 points) once again provided KU with some punch off the bench in his first college road game.

Not only did his athleticism and effort come in handy defensively, but Agbaji proved to be one of the few Jayhawks able to play above the rim. Shortly after coming off the bench in the first half, Agbaji used a Mitch Lightfoot screen and Devon Dotson lob to soar for a two-handed jam.

Bill Self didn’t look to his other substitutes much, and Lightfoot missed much of the second half after getting hit in the mouth.

Baylor’s bench outscored KU’s 24-13, with most of those Bears points coming in the game’s final minutes.