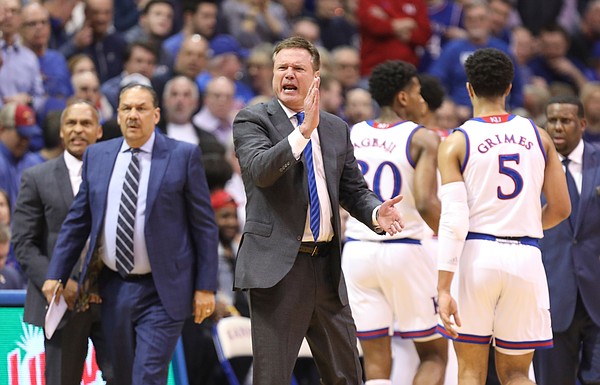 A frustrated Bill Self barks at the officials during a timeout in the first half, Monday, Feb. 25, 2019 at Allen Fieldhouse. by Nick Krug

From the outside looking in, the Big 12 regular season championship looks far less attainable than usual for Kansas.

While only a game back of first place in the loss column, the Jayhawks are in third place. They could win the final three games on their schedule by 50 points a pop without such a dominating finish being enough to make up for their various road clunkers in conference play during the past two months.

If either or both of Kansas State and Texas Tech can navigate the next week and a half without another loss, the league title will be one — or both — of theirs, and KU’s streak will finally come to a close.

This may be too much for even Bill Self, kingpin of Big 12 basketball, to overcome.

“We’ve had some success with it. And I don’t know that I can remember a time where we didn’t control our own destiny,” Self said earlier this week.

“I think that there’s been years where we were five games out and maybe be behind a game or something. Going into the last three,” Self continued, “I don’t know that we’ve ever been in a situation where we didn’t control it; if we won out, we would win it. And we haven’t always won out, but we at least put ourselves in the position if that was the case.”

Hey, when you’ve won the damn thing 14 years in a row, it can’t be easy to call to mind all the minutia from each season on the fly. So you’ll have to forgive Self for not remembering off the top of his head that his Jayhawks actually have been in a similar position with three games to go. After all, it has been eight years since KU trailed in the standings at this late stage of the season.

In 2011, the Jayhawks were 11-2 with three games to play, but looking up at 12-1 Texas in the Big 12 standings. A veteran KU team led by Marcus and Markieff Morris, Brady Morningstar and Tyrel Reed extended the program’s streak of conference titles to seven by winning it outright, without even facing Texas in the last three games. 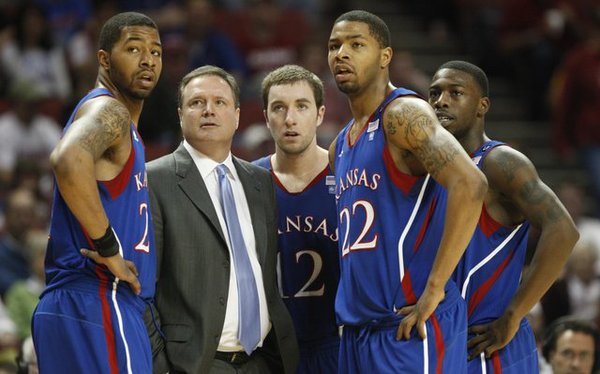 From left, Markieff Morris, coach Bill Self, Brady Morningstar, Marcus Morris and Elijah Johnson look on from the sidelines on Saturday against Oklahoma in Norman, Okla. by Jesse Newell

The Jayhawks finished 14-2 by defeating Oklahoma and Missouri on the road and Texas A&M at home. A Longhorns team led by Jordan Hamilton, Tristan Thompson, Gary Johnson and Cory Joseph dropped a road game at Colorado and a home matchup with Kansas State to pave the way for another KU crown.

The only other year in which the Jayhawks found themselves behind with three games left turned out to be one of the most memorable seasons in program history. The eventual national champions were 10-3 in 2008, trailing 11-2 Texas by 1 game. With Brandon Rush, Darrell Arthur, Mario Chalmers, Darnell Jackson, Sherron Collins, Russell Robinson, Sasha Kaun and Cole Aldrich, the Jayhawks had little trouble beating Kansas State and Texas Tech in Allen Fieldhouse, as well as Texas A&M on the road. 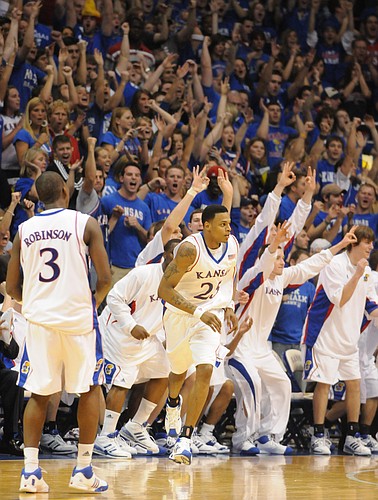 The Allen Fieldhouse crowd erupts after a three-pointer by Brandon Rush, center, during the second half Saturday, March 1, 2008 at Allen Fieldhouse. Left is Kansas guard Russell Robinson. by Nick Krug

Those three victories allowed Kansas to share the Big 12 title with the Longhorns, as both teams finished at 13-3 in 2008. A UT team led by D.J. Augustin, A.J. Abrams, Damion James and Connor Atchley did the Jayhawks a favor by faltering at Texas Tech.

The path to a 2019 Big 12 title, though, is decidedly unique from the previous two that worked out for KU. The Jayhawks don’t need just one team to slip up this time, but two. They’ve got to hope and pray and cross their fingers and toes and maybe find some K-State and Texas Tech voodoo dolls and watch from afar — and, oh yeah, win two more road games — as other Big 12 opponents help determine KU’s title hopes.

Then, there’s the matter of the anatomy of KU’s roster. That 2008 Kansas team was phenomenal and filled with veterans. The Jayhawks had lost three times all season, all by single digits, when they trailed UT late in that season. The 2011 Jayhawks seemed to be on a similar trajectory with the Morris twins dominating and the role players around them usually clicking. That team was 26-2 entering the final three games of the regular season.

And is it realistic to think this KU team (21-7 overall, 10-5 Big 12), which has gone 2-7 in road games this season, can win two road games in a four-day span, at Oklahoma State and at Oklahoma?

Self has said for weeks that his Jayhawks are playing with no margin for error. Now that reality is all the more magnified.

“Yeah, you kind of feel that way after the game with Tech,” KU forward Dedric Lawson said following a must-win over K-State on Monday. “There is no room for error. But at the same time, you know, we’ve got to take baby steps and just control the things we can control. At the moment, it’s just like taking one game at a time.”

While there’s no doubt Self wants to extend KU’s incredible run of success to 15 years, he’s not pressuring the Jayhawks with talk of the program’s conference title streak. His message has focused on this team’s present and its immediate future, not the past.

If the Jayhawks somehow pull it off, 2019 will go down as their most improbable Big 12 title season in the streak yet. And, should that happen, neither Self nor anyone who watches such a preposterous scenario play out will have any trouble remembering it in a few years.

"We just need to try and get a win in Stillwater."

Good luck with that, Bill. Your guys usually find a way to f*** it up down there. You've had better teams than this one that crapped their pants in Gallagher-Iba Arena, often against middling or bad Cowboy teams. Combine that with the fact that your guys have done a poor job of handling their business on the road this year, why should I believe this season's trip to GIA will be any different?

Go back to Iowa City if you want to quit on the Jayhawks again.

Gallagher-IBA has been a house of horrors for KU. The only thing I can think is that OSU is that bad this season, maybe talent will win out. But it's going to take a lot, especially since I'm guessing that even though they can't win the conference, every other team is sick of KU winning it so they'll do everything they can to end that.

Need to end this season the right way. Come on KU, finish STRONG!

I had such high hopes for a Texas Tech upset tonight by the Pokes, who even took It to OT, but lost by 2. Why the hell couldn't TTU have played like that last Saturday? And who knows about the confidence of the Cowboys, after such a fabulous comeback, and almost-won game? With KSUCK and Tech tied now for first place, it’s imperative that we shake off the GIA demons and “control our own destiny” !!!

How do the cowboys take them to OT and we lose by 29?

Amazing how a possession here or there can change things so much. Haven't heard Coach talk about it this year, though he's definitely stress it (valuing each possession) in the past. Basically the article (Matt?) wrote a week or so ago about KU and the purple kitties against WVU. Still lots of possessions left in this season, and even more untapped potential in our 'Hawks.

As many of you have stated including Jay, Bryce, Dirk and myself, that the horrible loss to West Virginia is going to haunt us for the rest of our lives if we are looking at the end of the "streak".

The hardest thing to swallow is that the streak could be ended by Brucie "Clueless" !

The way TTU shot on Saturday they could have beaten any team in the country. The way they played against OSU, the Topeka YMCA could have beaten them. We just need to take care of what we can control and play with the intensity we had against the kitties.

this KU team might be the worst Self has had in a little bit (just by execution ), but OSU might not have enough players to beat KU..they played their best game if the season against TXTECH..Im not sure they can dupliate them