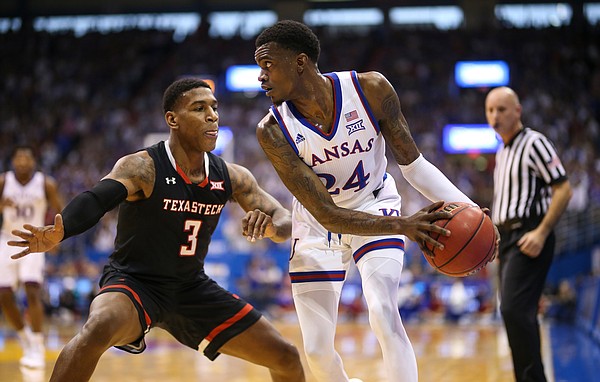 Kansas guard Lagerald Vick (24) is defended in the corner by Texas Tech forward Deshawn Corprew (3) during the first half, Saturday, Feb. 2, 2019 at Allen Fieldhouse. by Nick Krug

Quick grades for five aspects of the Kansas basketball team’s 79-63 win over Texas Tech on Saturday at Allen Fieldhouse.

KU led by as many as 14 points in the first half, as the Jayhawks came out as locked in and driven as they’ve been all season.

They looked out of character offensively, too, the way they were draining 3-pointers. KU nailed 9 of 15 from deep in the first half, fueling a 46-26 lead at intermission for the perennial Big 12 champs.

The Jayhawks didn’t dominate the second half the way they did in the first. But their willingness to move the ball and set each other up with good looks (19 assists) made for a relatively easy victory against one of the league’s better teams.

The Red Raiders may not be known for their offense, but give KU’s defense credit for keeping the visitors well out of reach during a dominating first half.

The Jayhawks held one of the league’s elite talents, sophomore guard Jarrett Culver (10 points) to 4-for-11 shooting in the first half. And with their most talented player struggling — he was even called for a charge on an absurd dunk — the Red Raiders only made 30.3 percent of their first-half shots, finishing with only 26 points.

Tech’s offense never took off in the second half, either, and the Red Raiders never recovered from their difficult start to the afternoon.

The most skilled offensive player on KU’s roster, Dedric Lawson looked far more comfortable than he did during KU’s back-to-back road losses leading up to the matchup with Texas Tech.

Lawson had 16 points and 7 rebounds by halftime, and nailed all three of his 3-point tries in the first half.

The junior from Memphis spent much of the first half facing the hoop instead of with his back to the basket inside, and Tech’s defenders didn’t have much luck stopping him.

Some foul trouble early in the second half kept Lawson (25 points, 10 rebounds) from making his typical impact in the game’s final 20 minutes.

Back in the starting lineup after a demotion at Texas, senior guard Lagerald Vick’s first-half outburst had as much to do with KU’s early separation and eventual victory as anything.

Vick (13 points, 3 for 4 on 3-pointers) buried all three of his 3-point attempts in the opening 11 minutes and he would have had a fourth had he not stepped on the arc on another try.

When Vick’s rolling, it really seems to fire up his teammates. And KU’s offense took off with Vick setting the pace.

Making the second start of his young career, Ochai Agbaji kept standing out with his competitive approach to everything he does on the court.

Agbaji’s efforts on defense are just as crucial to KU’s success as his scoring (10 points) and rebounding (10 boards).

Devon Dotson (20 points, 4 assists) proved once again he has the speed and tenacity to attack the paint and, even better, do so with the intention of kicking the ball out to teammates to create some offensive flow.

Even when his passes weren’t assists, the dishes were able to keep the ball moving and the defense working, as he drew Red Raiders toward the paint and then fired them to scramble back out. Plus, he gave KU much-needed scoring balance.

Freshman Quentin Grimes had more than 2 assists for the first time in Big 12 play, finishing with 4, and went 2 for 7 on 3-pointers to score 6 points.

With Marcus Garrett out due to an ankle injury suffered during Friday’s practice, the Jayhawks’ rotation was even shorter than usual. So KU really needed whoever played to come in and not o any damage to the team’s chances against a strong Tech team.

Charlie Moore (2 points) benefited most from the open spot in the rotation, and he both assisted on a 3-pointer for fellow sub K.J. Lawson (3 points) and drove in for a layup during KU’s strong start to the first half.

Lineups featuring KU subs weren’t quite as impactful in the second half, especially when Tech did its best to make some runs and cut into the Jayhawks’ lead.