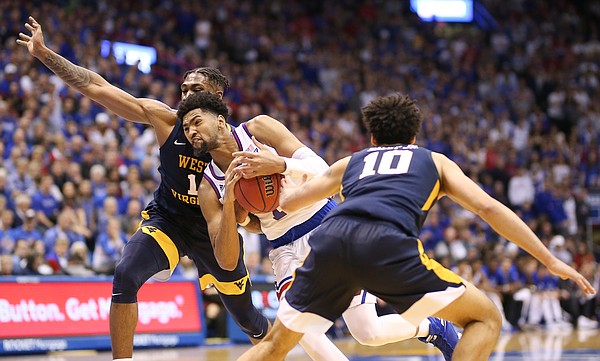 After spending much of the season’s first three months doing his best to carry the Kansas basketball team, things are finally beginning to settle down for Dedric Lawson.

Not only has the emergence of freshmen guards Devon Dotson and Ochai Agbaji meant the Jayhawks can actually win games without Lawson scoring 20-plus points and registering a double-double, KU’s leading scorer and rebounder will get some hard-earned time off in the days ahead.

During the last week of January, Kansas dropped back-to-back games at Kentucky and Texas, and Lawson spent much of both defeats getting bodied and pushed around by opposing bigs, who often doubled him inside and wore him down.

But the redshirt junior forward from Memphis, Tenn., who has spent more time on the perimeter in the five games since the loss at Texas, said he hasn’t felt as beat-up lately.

“I haven’t been as sore just after the game. I’ve been doing a lot of different things to take care of my body and things of that nature, like cold tub, hot tub, things like that,” Lawson said after contributing 14 points and 4 rebounds to KU’s 78-53 win over West Virginia on Saturday at Allen Fieldhouse. “Sometimes, we have a quick turnaround from Saturday, then to Monday. You don’t really have as much time to put your body into treatment.”

That won’t be the case this week. Lawson and the Jayhawks (20-6 overall, 9-4 Big 12) get a full seven days between their WVU win and a crucial road matchup at Texas Tech, the team with which they’re currently tied for second in the Big 12 standings, a half-game behind first-place Kansas State (19-6, 9-3).

It seems KU’s longest break in the schedule since late December couldn’t have come at a better time. Then again, is there ever a bad time to have a week off?

“That’s a good question,” Lawson said. “It’s a good time because, hopefully, it gives Marcus (Garrett, injured ankle) time to come back. I’d say it’s definitely a good time for all of our pieces to get healthy and for us to go into Texas Tech all together as a team, and go in there and be able to compete with all of our guys.”

Even if Lawson doesn’t want to admit it, his head coach, Bill Self, said several times on Saturday that he thinks KU’s multiskilled, 6-foot-9 forward has looked tired. Lawson is averaging 33 minutes a game this year, and providing Kansas with 19.2 points and 10.3 rebounds, plus 50.6-percent shooting. Between the effort he exerts and the amount of defensive attention he receives from KU’s opponents, it’s enough to overtax even a physically and mentally prepared athlete.

KU’s victory over WVU marked the team’s fifth game in 15 days. Lawson said he has felt more vigorous than may be expected because the team’s head trainer, Bill Cowgill, puts all of the Jayhawks in position to recover — “keeping guys fresh and keeping them not so banged up,” as Lawson put it.

Only five games remain now on the Jayhawks’ regular-season schedule, and running the table would qualify as an exceedingly tall task. But that’s the surest path to another Big 12 title for Kansas. And it’s far more feasible now than it looked a couple of weeks ago.

A rejuvenated Lawson, more capable of finishing inside, draining 3-pointers outside and cleaning the glass coming off a seven-day break, could carry KU to a fantastic finish to the season.

His load to bear won’t feel so heavy, either, now that he’s facing up instead of posting down low, and has Dotson and Agbaji co-starring with him in the Jayhawks’ late-season push.

We are going into a hornet's nest on Saturday. TTU is playing really well. If we can pull this one out, then I see #15 in sight. If not, then it will be really tough.

Really it's a TWO-GAME season for Kansas right now. I agree with you that TT on their floor is a mountain to climb. But the Hawks can not drop that home game against KSU either and expect to win the conference title. We have a week to prepare. Plenty of time to put our heads down, rejuvenate, practice and get up for TT.

Two games are necessary for the 15th.

Agree except, no game is more important than the “next” game. TTU may be the most talented and best coached team to play over the next five games but, KU can not afford to let their guard down should they win in Lubbock. Win all five and KU wins at least a share of the championship. It must not be assumed that KSU and TTU will lose any other of their remaining games (after losing to Kansas).

Lightfoot started to get it. Grimes has a knack of dishing a no-look pass at high speed. But Mitch was able to catch and dunk it. Not that it happens a lot, but it's a good sign... On the other hand, I have yet to see McCormack was able to do that. Twice or maybe 3x he did not look who's carrying the ball, and you know, he kept moving his feet and of course he couldn't catch the ball passed to him.. so until we have a good post/bigs who can finish strong, we will have to ride on DSmoove - he's the only one who can get close to the basket & confidently finish it. And as Benton said, D's 3pt has been on-target, he will continue to be our go-to guy. Rest up, D, we will need you fresh, stronger.

I disagree about Lightfoot "start(ing) to get it." He has always "gotten it" when it comes to hustling, drawing charges (one of the best I've seen), and blocking shots. He's just had more of an opportunity to play lately.

Yep, you're right - I stand corrected. Had we seen more passes thrown to him, we would've seen more baskets from Mitch. Trust perhaps was not there from the guards. The other thing, plays were not much designed for him either.

Plays will never be designed for Mitch. He'll get his points on the glass and being in the right supporting position.

I hope you're wrong. But that's reality, looks like.

We are in control of our own destiny but we also have the toughest road of all the contenders. I think it comes down to the health of Wade. If he’s healthy they can win it even if they lose to us.

Beside losing to us, I think the kitties have at least 1 more hairball to cough-up.