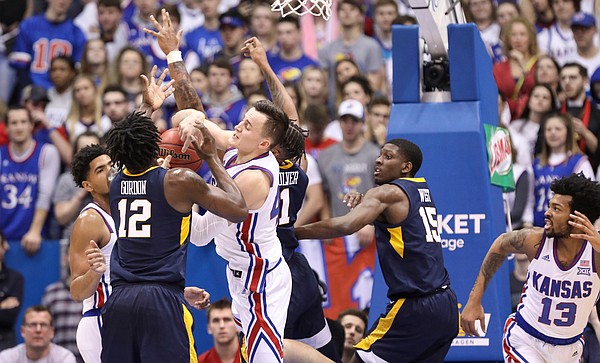 Kansas forward Mitch Lightfoot (44) battles in the paint for a ball with West Virginia forward Andrew Gordon (12) during the first half, Saturday, Feb. 16, 2019 at Allen Fieldhouse. by Nick Krug

Quick grades for five aspects of the Kansas basketball team’s 78-53 win over West Virginia on Saturday at Allen Fieldhouse.

To the Jayhawks’ credit they rarely let up or faltered in cruising to an afternoon victory. More importantly, they didn’t play down to their competition and looked like they were playing one of the Big 12’s lesser teams throughout, rather than making the types of mistakes that would benefit the underdog Mountaineers.

Kansas shot 53 percent from the field, went 8 for 20 on 3-pointers and finished with 17 assists on 28 baskets.

Great defensive activity in the first half, both inside and out, made sure the Mountaineers didn’t get comfortable.

WVU began the game hitting just 3 of its first 15 shots, as KU’s guards and bigs opened the afternoon locked in and ready to compete.

Kansas was able to gain its first double-digit lead less than 9 minutes in as the Jayhawks contested just about every shot WVU could manage to get up early on.

The Mountaineers turned the ball over 12 times in the first half and shot 7 for 28 in the opening 20 minutes, allowing KU to hit halftime in total control, up 43-16.

WVU finished the loss shooting 34 percent from the floor, with 24 turnovers.

It wasn’t a banner day for Dedric Lawson, but the Jayhawks didn’t need him to dominate, either. A ho-hum game by Lawson’s standards, KU’s typical go-to guy went for 14 points, 4 rebounds and 2 assists.

Lawson was engaged, he just seemed to willingly take on a supportive role with KU rolling.

Starting for the third game in a row and for the third time in his young career, David McCormack made his presence felt on the defensive end of the floor in the first half. McCormack (10 points, 4 rebounds) swatted 2 WVU shots in the opening 5 minutes.

The big man showed some promising footwork early on, too, taking what looked to be a possible turnover on the baseline under the basket, and working his way to a tough finish and layup.

The freshman trio of Devon Dotson, Quentin Grimes and Ochai Agbaji made a ludicrous start for Kansas possible with their efforts on the defensive end of the floor. Between ball pressure and staying assignment sound the Jayhawks’ guards kept WVU in check throughout the first half.

Dotson (15 points, 8 assists, 5 rebounds) picked up on Saturday right where he left off at TCU this past Monday, going for 13 points in the first half. With Dotson taking an assertive approach at point guard, it was easy for the rest of the Jayhawks to follow his lead.

Even when Agbaji (10 points, 3 rebounds) wasn’t scoring consistently in the first half, he made KU better offensively just by pushing the ball in the open floor when he could and driving hard into the paint against poor closeouts.

Grimes (4 points, 2 assists) missed all four of his 3-point attempts, but helped KU out a great deal with his perimeter defense and passing in the first half.

K.J. Lawson, like Dotson, kept his positive momentum rolling from KU’s road win in Fort Worth, Texas, earlier in the week.

Mitch Lightfoot didn’t start but KU relied on its backup big man more than it did McCormack, and Lightfoot delivered his typical energy and hustle plays on both ends of the floor. Lightfoot (5 points, 7 rebounds, 3 blocks), with his activity, even if it was just coming through with a hard foul to make sure WVU didn’t get an easy basket inside, continued to be a vital part of the Jayhawks’ rotation.

How many charges did Mitch Lightfoot take over the course of the game? His defense was outstanding!

ESPN: "F" For switching early to the introduction to the NC State/Duke game. Yes, Kansas was going to win big, but there were 3 minutes left and the other game had not even started yet. I wanted to enjoy every second of the Bob Huggins pummeling.

Yes! You got to be kidding me, ESPN switches from an ongoing game to pre-game nonsense showing Duke students?!

I would like to see the starting lineup of the Lawson brothers, McCormack, Dotson and Agbaji with Grimes and Lightfoot first off the bench. It would give us 4 three point threats, more bigs, rebounding (which has been a problem) energy. When Garrett is available he comes off the bench to spell Dotson.