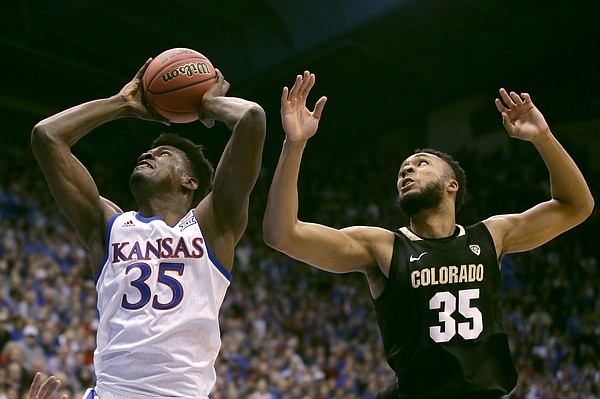 Kansas' Udoka Azubuike gets past Colorado's Dallas Walton to shoot during the first half of an NCAA college basketball game Saturday, Dec. 7, 2019, in Lawrence, Kan. (AP Photo/Charlie Riedel) by Associated Press

Quick grades for five aspects of the Kansas basketball team’s 72-58 win over Colorado on Saturday at Allen Fieldhouse.

• Turnovers in the first half kept the Jayhawks from burying the Buffaloes. A lot of the time KU handled CU’s half court zone well, but the unforced giveaways too frequently had the offense looking out of whack. KU had 9 turnovers and 12 made field goals when up 27-18 late in the first half.

• The Jayhawks entered the locker room after 20 minutes already with 10 turnovers. What they did well in the first half, though, was repeatedly get the ball inside for high-percentage looks. KU scored 26 of its 34 points in the paint and shot 50% from the floor.

• The Jayhawks improved to 7-1 with 57.1% shooting in the 2nd half against a solid defensive team in CU. But they also turned it over 11 times, with 2 coming in the final couple of minutes.

• Colorado came to the fieldhouse prepared to fire away from 3-point range and the Jayhawks handled it well enough to keep the Buffs from ever getting hot. Nine of CU’s first 11 shot attempts were from beyond the arc and the visitors made there of them.

But two of those came from CU bit Lucas Siewert taking advantage of the space he had with Udoka Azubuike defending him. And the Jayhawks held Colorado to 4-for-15 shooting on 3-pointers in the first half.

• The Buffs never found any rhythm offensively in the first half, when they committed 9 turnovers and shot 26.9% from the floor. KU’s defense on the perimeter and inside made it a rough 20 minutes for the No. 20-ranked Buffaloes.

• David McCormack came out knocking down jumpers as KU dealt some early blows to CU’s zone. Before long Udoka Azubuike was devastating the Buffs around the rim, catching entry passes in perfect position or following a missed shot for a jam. The two bigs combined for 14 points in the first half..

• Neither of KU’s two biggest bigs overwhelmed Colorado constantly. Azubuike finished with 12 points, 6 boards and 3 blocks. McCormack played few important minutes in the second half after his hot start to the evening.

Azubuike did seem to wear down the CU interior defense with his size and the fact that the Buffs had to deal with him on both ends of the floor.

• KU guards Devon Dotson and Ochai Agbaji did a nice job tracking down rebounds in the first half, when Dotson gathered 4, Agbaji 6 and KU outrebounded the visitors 24-13.

• Agbaji (20 points) knocked down a couple of 3-pointers as KU created separation in the second half, after the Jayhawks went 0-for-6 from deep in the first half. When he nailed another near the midway point of the second half he still was the only Jayhawk to have connected on one. He also, time after time, was a standout by attacking the glass (12 rebounds).

• Marcus Garrett set the tone for KU’s impressive defense. Garrett was the one defending CU leading scorer and typically efficient producer Tyler Bey, a 6-foot-7 wing. Bey didn’t get off a shot until the 1:28 mark of the first half, and it was Tristan Enaruna guarding him at the time. Great accounted for 3 of KU’s 4 steals in the first half, as well.

Garrett (4 points, 2-for-7 FGs) didn’t have a good shooting night but his presence remains a necessity for KU’s success as he does everything else so well. His passing (6 assists) and defense make everything the Jayhawks do function.

• Both Enaruna and De Sousa came in and grabbed a few boards in the first half. But neither team was getting much offensively from its subs in the opening 20 minutes.

Isaiah Moss missed two 3-pointers in 11-plus first half minutes.

Moss looked more comfortable in the second half and finished with 8 points.