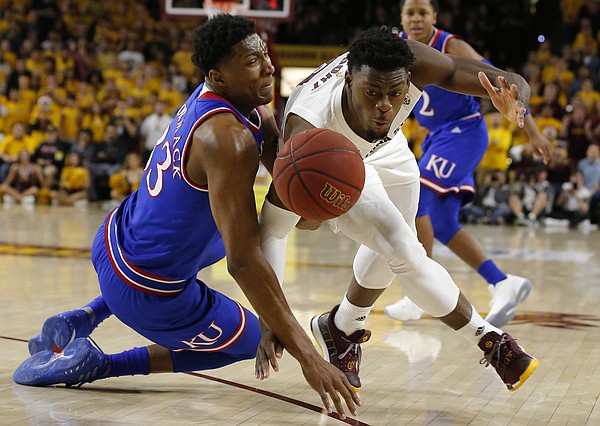 After suffering through repeated road issues a season ago, the Jayhawks would like to avoid in the months ahead the trend that dogged them so thoroughly during the 2018-19 campaign.

With just one true road game out of the 11 on the schedule behind them, they have a long way to go to prove those difficulties are all in the past.

KU relinquished a 4-point lead with fewer than two minutes to play in this season’s road opener at Villanova, and the Jayhawks’ waved goodbye to their No. 1 ranking as a result.

Squint just right and the narrow, pre-holiday break loss might begin to look similar to the one from the previous season, when KU lost by 4 at No. 18 Arizona State. In the 1-point defeat at then-No. 18 Villanova a year later, KU had an even better chance to win.

Still, a clear-eyed view of the current KU roster unveils a group of Jayhawks who shouldn’t in the next several weeks falter so often in an opponent’s arena the way their predecessors did — even though some of the names and faces are the same.

Beginning on Sunday at Stanford (11-1), these No. 5 Jayhawks (9-2) can take another step toward proving road defeats won’t become the new normal again, after KU went 3-8 in true road games during a 26-10 season.

KU head coach Bill Self described on Friday afternoon inside Allen Fieldhouse some of the attributes that should, theoretically at least, make this team better on the road.

“I think we defend better,” Self said. “You defend and rebound, you probably have a better chance on the road, I would think. Doesn’t mean it’s always going to play out that way. But us losing to Villanova didn’t have anything to do with 20,700 people in the stands, where it may have had something to do with it if we lost last year.”

That’s a telling statement about one of the many differences between this season’s KU team and last year’s. Those Jayhawks often weren’t ready for the hostile environments that await KU teams. This group should be.

For one, returning sophomores Devon Dotson, Ochai Agbaji and David McCormack now have a real sense of what type of efforts bring about road success and which kinds send you back to Lawrence licking your wounds.

Plus, as junior Marcus Garrett quickly brought up while discussing KU’s road woes from a year ago, most of those came without 7-footer Udoka Azubuike, who suffered a season-ending injury in early January.

The lessons learned in those Udoka-less losses should inform how members of KU’s now more experienced core go about their business when they step on an opponent’s home court.

“We have to go into them more focused,” Garrett said of road games. “We’ve got to learn how to finish games. A lot of those road games we had the lead, we had momentum and we would just give a game away.”

Sounds a lot like KU’s loss at Villanova this past week. Of course, that has been on the mind of all the Jayhawks lately, especially after Self spoke to them on Thursday.

“We talked about finishing,” the coach shared, “quite a bit.”

Self said KU didn’t play to its strengths at the most opportune times at Villanova.

“When you win on the road you’ve got to make free throws late, you’ve got to do things — you’ve got to make sure you get a shot every possession. You’ve got to understand when you’re up 2 with 20 seconds left the last thing you can do to a group that’s already shot 40 3s is to let them shoot another 3,” Self said, rattling off the crunch time problems that cost KU at Villanova. “That is something that we’ll learn from. But that’s all part of finishing a game.”

Dotson didn’t play to his potential late in KU’s loss at Villanova. So the lessons from the first road game of his sophomore season shouldn’t soon be forgotten.

His teammates saw the miscues up close and personal, too, and heard about them more from Self when they got back to Lawrence.

We should get a glimpse this weekend, when KU plays at Stanford, of how ready they were to digest those hard to swallow bits of knowledge. They understand winning on the road isn’t easy. Now what are they willing to do about it?