Chemistry off the court one factor in No. 1 Jayhawks' early season success 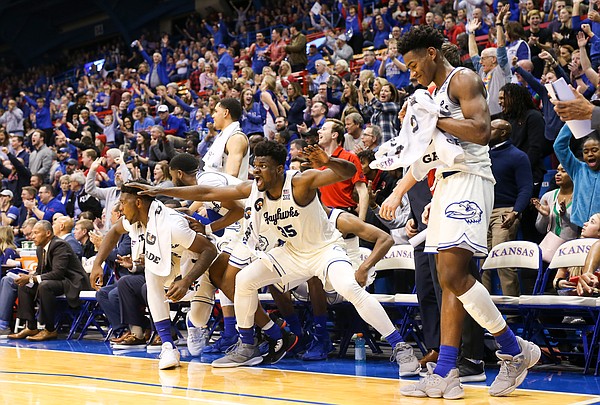 Kansas center Udoka Azubuike (35) and the Jayhawk bench react to a three from Kansas guard Chris Teahan (12) during the second half, Tuesday, Dec. 10, 2019 at Allen Fieldhouse. by Nick Krug

So much goes into assembling a superior college basketball team. Sure, you’ve got to defend and rebound. Taking care of the basketball and seeking out high-percentage shot attempts to maximize offensive efficiency is a must, too.

But sometimes less trackable intangibles are just as vital.

Kansas coach Bill Self has constructed enough consistently triumphant squads through the years to notice when those more abstract attributes are trending in the right direction.

Often in the past few months, Self has gone out of his way to hammer home that he really likes the players on this year’s team. He explained earlier this week why that is when one of his thoughts reminded everyone listening that not every basketball team is actually comprised of players who see eye to eye.

“I think they actually like each other,” Self said.

Maybe winning nine games in a row and achieving the No. 1 ranking in the country plays into that harmony, as KU (9-1) heads into its first true road game of the season, at No. 18 Villanova (8-2). But winning isn’t the only factor.

Senior center Udoka Azubuike deserves some of the credit for making this all work. A sullen starting center wouldn’t boost the team’s chemistry any. This year, the 7-footer’s energy has shot up, and he’s even become more of a leader than he ever thought about being before, through his improved approach.

Azubuike will tell you playing on this team, to him, feels a lot like playing with a bunch of buddies.

“As a team, we get along with each other,” Azubuike said. “Everybody loves each other, and we’re friends off the court.”

Sophomore point guard Devon Dotson agreed with assessments from Self and Azubuike that the current players all like each other and said that “for sure” helps them in the heat of a game.

“Everybody in the locker room has that same mindset — we want to win,” Dotson said. “And we're all competitive and have the same main goal, so that can help us out a lot on the court.”

The Jayhawks interact well together, which allows them to function at a high level and work through obstacles better. Their collective chemistry should serve them well as they try to win on the road against possibly the best offensive team they’ll face all season, Villanova — No. 3 nationally in adjusted offensive efficiency, per KenPom.com.

From an environment standpoint, the Wells Fargo Center (20,056 capacity) will look vastly different than the tiny gymnasium in Hawaii where KU last played outside of Lawrence. Still, that experience of not only winning the Maui Invitational but also spending time away from their campus routines with each other on a lengthy but rewarding trip helped the Jayhawks gel. And they’ll need to work well together, especially on defense, to win at Villanova and maintain their No. 1 ranking — a tricky feat in its own right; just ask Michigan State, Kentucky, Duke and Louisville.

Azubuike said KU’s trip to Maui “played a huge part” in the players’ bonding. Sure enough, they didn’t falter in the title game as a talented Dayton squad pushed them to the limit.

“Being together, we kind of understand each other a little bit just from that experience,” Azubuike said of a victorious trip to paradise.

Dotson said KU’s chemistry can get even better, which makes sense when you think about how much growth could come in the next 30 or so games. The season is still relatively young. This team, currently ranked No. 1 in the country, has potential for further improvements. Without any tricky chemistry issues to deal with, that feels all the more possible.

Self likes this mix of personalities and talents.

“We’ve always had great kids — don't get me wrong,” he said. “But sometimes pieces just seem to fit better off the court than other times.”

When describing why he likes these Jayhawks so much, the coach began by calling them “respectful,” “hard working” and “responsible.”

“They seem to play for each other,” Self added, “for the most part — not always. But I think there's some qualities that all good teams have and, you know, we've got some of those.”

KU coach Bill Self speaks to media ahead of matchup with Villanova by KUsports.com