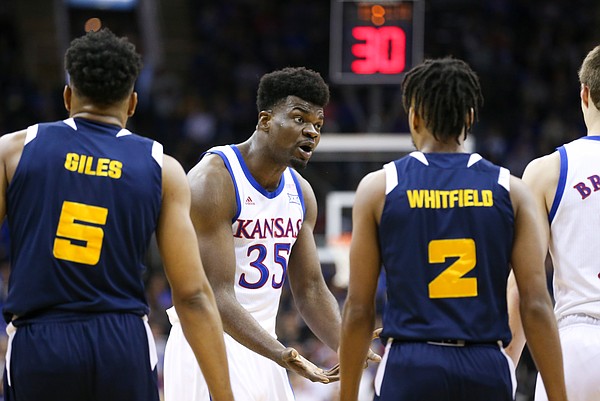 Kansas center Udoka Azubuike (35) gets the attention of Kansas guard Christian Braun (2) during the first half, Saturday, Dec. 14, 2019 at Sprint Center in Kansas City, Mo. by Nick Krug

• Throw out the first 8 minutes or so and KU mostly overwhelmed UMKC. The Jayhawks rarely even needed the 3-point line to continually add to their lead.

KU shot 63% from the field in the second half and finished with 52 points in the paint.

• KU didn’t need to do much to disrupt and challenge the Roos, and once the Jayhawks consistently played with some effort the hometown team’s chances of keeping up diminished.

• On a day that KU should have come out and dominated inside from start to finish, the listless start from the Jayhawks kept the game close early, with UMKC even leading nearly 10 minutes in.

• The interior play for Kansas picked up right about the time that Udoka Azubuike returned from his first breather on the bench. KU had tried its two starting bigs (Azubuike and David McCormack) for a few minutes, then Silvio De Sousa as the lone interior player. None of those looks were particularly effective in front of a low-energy crowd.

But KU, which trailed 11-10 when Azubuike checked back in, steadily built a 10-point lead in the 5 minutes that followed. The 7-foot senior blocked a couple shots, scored inside, grabbed some rebounds, even passed out an assist to Devon Dotson for a layup as KU finally began playing with some focus and gaining control.

Azubuike finished the win with 9 points, 5 rebounds and 3 blocks.

• When Azubuike headed to the bench for another breather in the latter stages of the first half, KU got some Udoka-like production out of McCormack. The sophomore big was up to 10 points and 4 rebounds by the final media timeout of the half. He hit jumpers, played hard inside and helped KU maintain a double-digit lead.

McCormack made sure KU headed to intermission on a positive note, too, as he provided energy and scoring in the final minutes of the half. He finished with 28 points and 7 rebounds.

• One would have figured Dotson, Ochai Agbaji and Marcus Garrett would come out flying around the flooring making life difficult for UMKC’s guards on both end of the court. But it took the trio a while to warmup for this nonconference December matchup.

• Agbaji couldn’t put together the types of shows he had of late, but Dotson and Garrett started producing once KU regrouped.

Oddly enough it was Garrett (13 points, 4 assists), who hit each of his three 3-point tries, who was the only Jayhawk hitting from outside, while also distributing and defending.

Dotson’s obvious speed advantage showed up from time to time, and the longer the game went the more he was able to stand out as UMKC wore down. Dotson contributed 18 points and 3 assists.

Agbaji wasn’t involved much offensively for much of the win, finishing with 5 points on 2-for-3 shooting.

• It wasn’t until very late in the blowout that KU’s reserves really started contributing. Silvio De Sousa was the most effective, especially in the second half. KU’s third big man in its rotation put up 9 points, 7 rebounds and 3 blocks.

This was a great opportunity for the reserves to shine. But KU only had 13 bench points when Chris Teahan checked in late with KU up 39. The reserves finished with 25 points.

Christian Braun provided nice effort on the glass, too, with 7 rebounds.