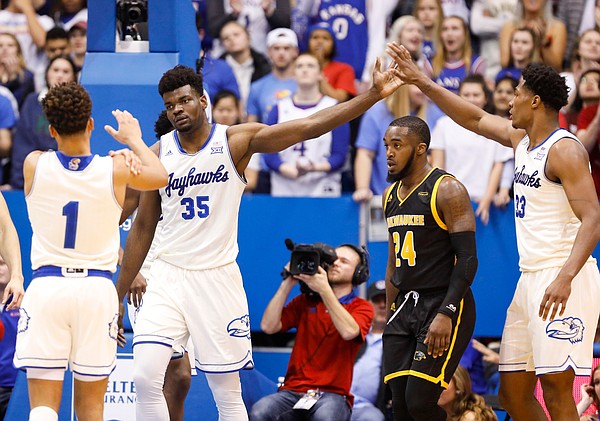 When a Kansas basketball player’s effort level is keeping him from living up to his potential, he knows he will hear about it. And he certainly knows whose voice will bring the problem to his attention.

So after Udoka Azubuike went a two-game stretch — more than 58 minutes of action — and had only nine rebounds to show for it, he had to know Bill Self wouldn’t be pleased.

“The coaches, they challenged me to go out and get more rebounds. I also challenged myself,” KU’s senior 7-footer said after the Jayhawks’ Tuesday victory over Milwaukee.

Challenges accepted. Azubuike, who delivered two 10-rebound games earlier this season, blew those numbers away against the Panthers. His 17 boards easily surpassed his previous career high of 13, which he set nearly two years ago against Texas.

“I thought he was great,” Self said of the senior center in KU’s 95-68 win. “The first half, he went after every ball. I was really pleased and impressed. I thought he played extremely well.”

When Azubuike entered the locker room at halftime with 10 rebounds in 12 minutes played, Self challenged him yet again: Go get 10 more and finish with 20.

“You would think a guy that does this for a living, his stats would be better,” Self said, no doubt calling to mind Azubuike’s three rebounds against Dayton and six boards against Colorado — his two lowest totals of the young season.

Azubuike wasn’t happy with his lack of production on the glass of late, either.

“I just decided to go out there and dominate on the rebounding end,” the big man said.

With Azubuike and sophomore guard Ochai Agbaji each cleaning up misses on both ends of the court, KU had a 29-9 rebounding advantage by halftime. The final margin was 45-27 in KU’s favor.

“From the shots that they missed early on, he was cleaning everything up, getting a lot of tip-backs,” Agbaji said, before calling it the best rebounding performance he has seen from Azubuike. “That was good, especially on the offensive end — and defensive end.”

Just a few days earlier, it was Agbaji who got called out by Self for his lack of rebounding. The guard responded with 12 boards against Colorado and eight more against Milwaukee.

Perhaps Marcus Garrett and David McCormack will be next after they tallied just one rebound apiece against the Panthers.

“He’s been on us,” Dotson said of Self challenging his players. “I’ll give him that. But that only makes us play harder and play better.”

Stop hanging on the rim.