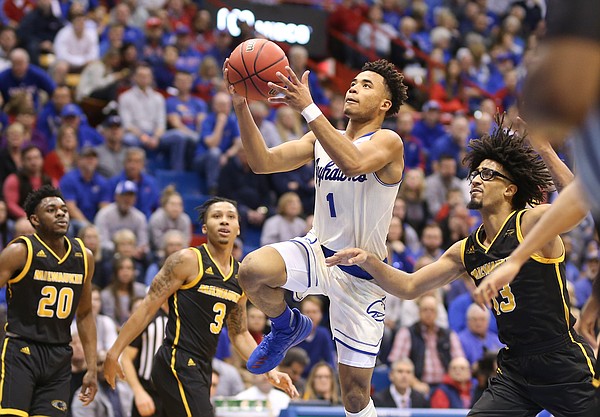 Kansas guard Devon Dotson (1) elevates for a bucket past Milwaukee guard Courtney Brown Jr. (13) during the first half, Tuesday, Dec. 10, 2019 at Allen Fieldhouse. by Nick Krug

Grades for five aspects of the Kansas basketball team’s 95-68 win over Milwaukee on Tuesday at Allen Fieldhouse.

• The Jayhawks came out draining 3-pointers, a little out of character for sure, but a sign of the dominating win that was about to come. KU knocked in 12 of 28 from deep in a mostly free-flowing game that allowed KU’s guards to play with open minds.

• KU was able to create massive separation in the first half by killing it on the offensive glass. On the seldom occasions that the Jayhawks missed, they often kept the possession alive and finished it off with a basket. By the end of the victory KU scored 21 second-chance points on 14 offensive rebounds.

• It seemed KU would experience a letdown in energy at some point of such an easy win, and that came on defense, early in the second half in particular. The Jayhawks weren’t able to turn a blowout into a massacre as human nature caught up with them for a few minutes and their lead failed to balloon.

After Milwaukee only scored 8 points in the paint in the first half, the Panthers put up 18 inside in the second.

• Still, KU’s defense primarily looked sound overall. The Panthers only shot 36% from the floor and went 7-for-35 on 3-pointers.

• Udoka Azubuike destroyed Milwaukee on the glass, with his career-best 17 rebounds. It set the stage for a 45-27 rebound margin in KU’s favor.

The 7-footer didn’t miss a shot from the floor (7-for-7), nor did he misfire on his lone free throw try, making it one of his best overall games, with 15 points and a double-double

• David McCormack only played 18 minutes after starting, as usual, and he only had one rebound in that time, while going 3-for-5 from the field and 1-for-4 at the foul line.

• Devon Dotson (22 points, 9 assists) and Ochai Agbaji (22 points, 8 rebounds, 3 assists) were stars, making a lopsided game entertaining at times with their ability to take over.

• Marcus Garrett missed all three of his 3-point looks and scored just 7 points. His primary contributions, of course, came as a passer (7 assists) and defender. When he was on the floor, KU’s lead tended to grow.

• Lots of bench minutes meant plenty of scoring from the reserves (22 points). But Isaiah Moss was the only one with more than 4 points, going 2-for-5 on 3-pointers and putting up 8.

And while Moss, Silvio De Sousa, Christian Braun and Tristan Enaruna all played double-figure minutes off the bench, they didn’t play well enough collectively for Self to let them wrap up the win.

These are the types of games in which Azubuike, Dotson, Agabji and company need to be watching the final minutes. But the bench’s performance proved to spotty for Self to trust them.