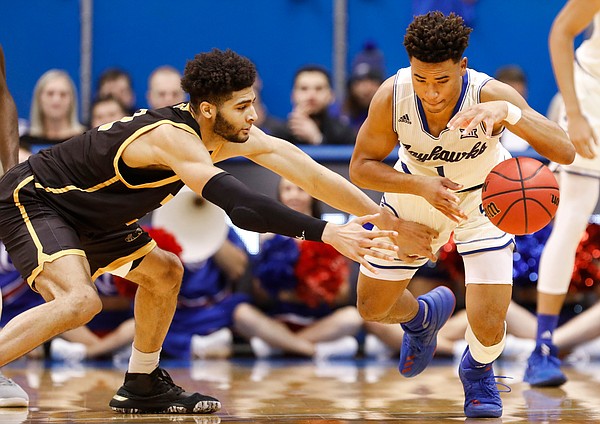 Kansas guard Devon Dotson (1) comes away with a steal from Milwaukee center Amir Allen (12) during the second half, Tuesday, Dec. 10, 2019 at Allen Fieldhouse. by Nick Krug

In a college basketball season devoid of truly elite teams, there’s one surefire way for the best programs in the country to actually stand out.

Every massive underdog that shows up at Allen Fieldhouse envisions leaving this venue the way Stephen F. Austin left Cameron Indoor Stadium earlier this year, and how Evansville departed Rupp Arena a couple weeks before that — with a bragging-worthy marquee victory that leaves the rest of the college basketball world buzzing about what just transpired.

That’s what the Milwaukee Panthers had in mind Tuesday night. But just like UNC Greensboro, Monmouth and East Tennessee State before them, they left in defeat because KU handled its business.

The Jayhawks’ first potential mental hurdle to overcome popped up after they raced out to an 8-0 lead and Milwaukee coach Pat Baldwin called a timeout. Would they let up and lose focus? Or would the players prove they could bury a lesser foe before the Panthers even had a chance to gain some semblance of confidence?

Kansas responded the way a team ranked No. 2 in the country should. The 3-point barrage kept blasting, the overwhelming defense didn’t subside and Milwaukee trailed by 20 points before the midway mark of the first half.

“We just came out aggressive,” sophomore point guard Devon Dotson said of piling on early. “We kept the pace going, kept thing going and made them play catchup. We wanted to throw that first blow that’s hard to come back from.”

This KU team (8-1) will face far greater tests than this one, a 95-68 rout. But they have leaders in Dotson, Ochai Agbaji and Marcus Garrett who are learning how to assert their wills on the court. They play for a head coach in Bill Self who will call them out if they are careless with a lead, and they were sure to avoid any such lectures against Milwaukee — at least in the first half.

There was no looking past the task at hand, even as it became painfully obvious what the result would be at the end of the 40-minute matchup.

The Panthers showed up in Lawrence ranked No. 237 in the country according to KenPom.com. They had no business giving KU any trouble, and the Jayhawks made sure the visitors never felt frisky enough to make it interesting. Milwaukee (5-5) is a much worse team than the Evansville squad (No. 181) that won at Kentucky or the group from Stephen F. Austin (No. 183) that shocked Duke in overtime. Still, those results remind us all how college basketball upsets can come out of nowhere, particularly this year.

Coming off victories over Dayton and Colorado, it would have been easy for the Jayhawks to feel content about where they’re at as a team and sleepwalk to a win against overmatched Milwaukee. Instead, they dominated throughout the first half, building an insurmountable lead.

“I mean I think it starts in practice. Coach really pushes us in practice. And we go hard. There's no like complacency,” Dotson said after his 22-point, 9-assist night. “We get things we know we need to improve and work on each and every day. All these guys in here are competitive, and they want the best.”

There were lulls Tuesday night, too. The domination didn’t continue throughout the second half. And Self was dissatisfied enough with his lineup options that he kept starters on the court late into the win, as the margin hovered around 20 points.

Remember: this isn’t a great team. There might not be any of those in any conference this year, either.

But KU certainly is becoming one of the best around for this 2019-20 landscape. As the Jayhawks controlled the game in just about every way imaginable, they very much looked the part of a team that will reside within the top five of the rankings from here on out. And the Jayhawks could move up to No. 1 as soon as next week, thanks to Texas Tech’s victory over current No. 1 Louisville in New York, a result celebrated by the fieldhouse crowd as the Jayhawks finished off Milwaukee.

Self thought his team probably isn’t good at avoiding complacency just yet, citing the way KU played with a big lead in the second half. But he does like another trending characteristic of this team.

“We've come out with good energy to start a game,” Self said. “I mean, even (against) Duke, great energy. Chained, great energy, we just didn't play great early. We have started games with with good energy and even at home, we haven't always played well but I thought Greensboro and East Tennessee State I thought we played with good energy early. So that's, that's one thing that we have done maybe better than last year's team.”

With that type of urgency, there won’t be many blemishes on KU résumé this season. And if the L’s in the win-loss column are associated with teams such as Duke instead of random nonconference opponents, that will help KU look a little different from other contenders.

Now the Jayhawks have to go do it again on Saturday, against No. 249 Missouri-Kansas City, at Sprint Center. And they need to do it in even more impressive fashion, so Self doesn’t have to use starters in the final minutes the way he did against the Panthers.